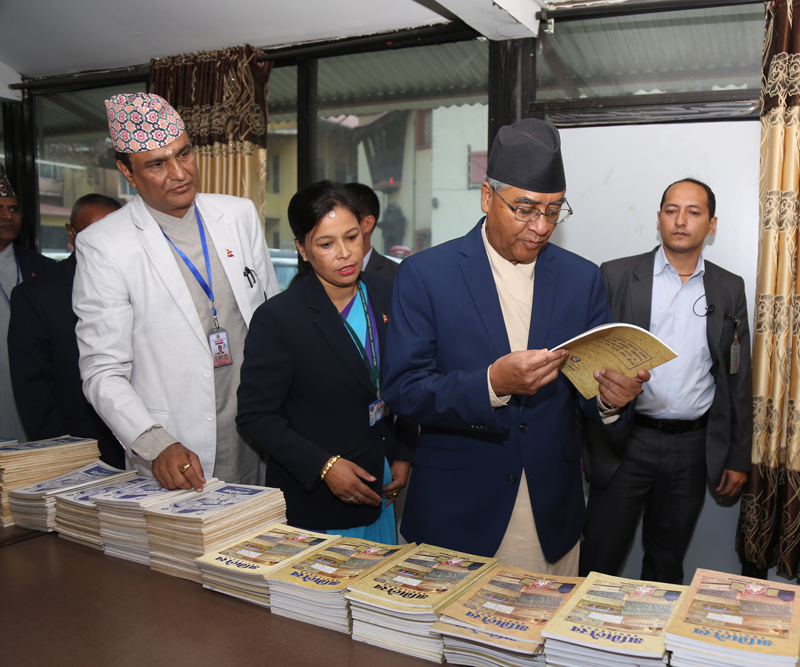 KATHMANDU, Oct 10: Prime Minister Sher Bahadur Deuba has stressed that the National Archives should be developed as a research center.

Inaugurating the golden jubilee celebrations of the establishment day of the Archives amidst a function here today, the Prime Minister pledged to sort out the issue with the Supreme regarding the land occupied by its building.

He took the time to urge all concerned to comply with the provision of submitting documents of significant values dating back to 25 years to the Archives so as to protect them in the future.

"Microfilming of handwritten manuscripts of antique value and books relating to history, religion, and philosophy is necessary for their long-term protection," the Prime Minister asserted.

Also speaking on the occasion, Minister for Culture, Tourism and Civil Aviation, Jitendra Narayan Yadav, highlighted on the importance of Archives in view of carrying out important research and study.

Efforts are underway to make sure that the Archives would not be shifted to another
location bearing in mind the risk of damage that hundreds of invaluable artefacts may face during such process, according to him.

The present building housing the National Archives was constructed with the assistance from the Government of India.

Archives Director General Bhesh Narayan Dahal said it would be better not to shift the Archives as there was high possibility of artefacts of invaluable importance of getting damaged up to 90 percent while changing its location.

Culture expert Satyamohan Joshi said the Archives' present building was constructed for its purpose and its location should not be changed and its protection should be the concerns of all.

Archives Chief, Saubhagya Pradhananga, said there is the collection of invaluable documents of antique and historic importance dating back to the 7th century and other rare documents in the world in the Archives that was established from the government level on 3rd October 1967 with the objective of protecting and managing documents of national importance.

The Karanya Biyog, Skanda Purana, Satdharma Kundalika dating back to the 13th century, Nyaybikasini, Lal Mohar, Sandhipatra, Istihar, other letters of antique importance belonging to the period of Malla dynasty king Jayasthiti Malla and other rare artefacts are stored in the Archives. Here is the collection of original manuscripts written in the Sanskrit, Newari, Maithili, Hindi, Tibetan and some are in the Bengali languages. Microfilming of 200 thousand books has been done.

The Nishwastatwa Samhita, a handwritten text of the Shaiva religion dating back to the ninth century is under the protection of Archive which is the sole antique listed in the 'Memory of World Heritage'.

Karandabhyu, a text of the Buddhism written in the Sharada script and 'Saddharmapundariksutra' written in the Gilgit script are under its protection.

Likewise various handwritten manuscripts written on Bhojpatra (bark of Betaula Utilis plant) sheets, Palm-leaf manuscripts and others written on Nepali paper, Indian Paper and Neelpatra are protected here. Some 30 thousands original manuscripts/ texts related to tantra, philosophy, history, Vedas and Karmakanda and some 20 thousands archives, some eight thousands books written in the Tibetan language and 180 thousand microfilming copies are under the protection of the Archives. RSS

Why did the people of Dharan elect independent Sampang as their mayor?
10 minutes ago