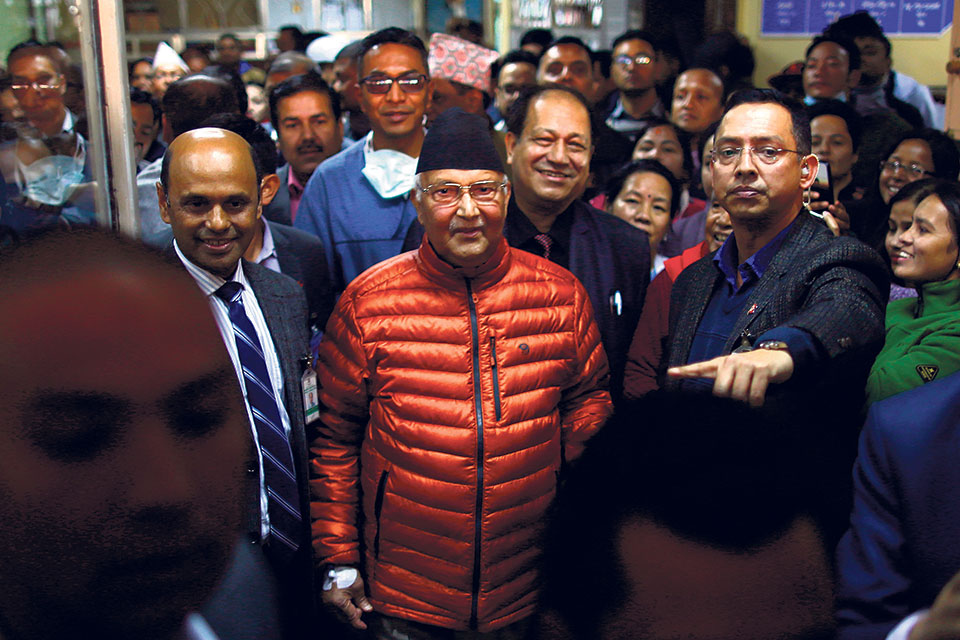 Prime Minister Oli was admitted to the hospital on November 26 after complaining of stomach pain. A team of doctors including his personal physician carried out an appendectomy on the ailing Oli after they diagnosed appendicitis and peritonitis.

Although the head of government emerged from the hospital, walking with the help of aides, he needs at least a week’s rest to get back to regular work, said doctors involved in his treatment.

“It would take a week or 10 days for him to be back to regular work,” the prime minister’s personal physician, Dr Dibya Singh Shah, said. “But he can work a little and hold meetings, and stroll around after a few days of rest.”

Oli was under regular observation by doctors at the Intensive Care Unit of the hospital until his discharge. Senior physician Dr Arun Sayami said doctors will carry out regular follow-up even after his discharge from hospital.

“He will take a complete rest for a few days and we will also do follow up on his fitness regularly,” Dr Sayami said briefing media. The prime minister had undergone dialysis for his deteriorating kidneys during his stay at the hospital following the surgery.

Oli has been undergoing regular dialysis. His kidney was transplanted some 12 years ago. Although he has been planning a re-transplant, doctors have not taken a decision yet.