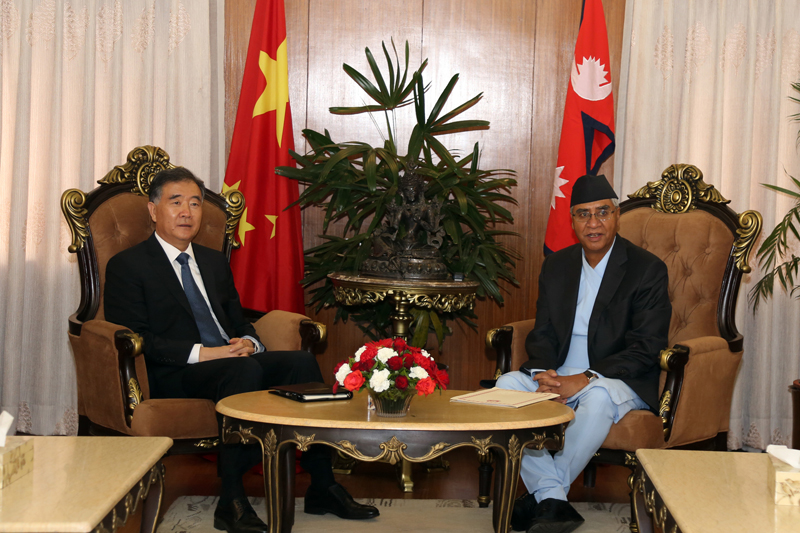 According to Prime Minister's Foreign Relations Advisor Dinesh Bhattarai, the prime minister stressed the need for enhanced cooperation in the fields of trade, tourism, investment and infrastructure development. “The prime minister said that Nepal wants progress in the work related to connectivity with China as part of the Belt and Road Initiative,” he said.

The prime minister stated about the excellent state of bilateral relations subsisting between the two countries and growing economic engagements in various fields. While thanking Chinese government for announcing 2017 as Nepal Tourism Promotion Year in China, Prime Minister Deuba also reiterated Nepal's commitment to implementing the past agreements reached between the two countries.

Separately, Vice Premier Wang paid a courtesy call on President Bidya Devi Bhandari at the latter's office. During the meeting, President Bhandari expressed happiness at the excellent state of bilateral relations between Nepal and China. She also expressed satisfaction at the ongoing mutual cooperation in various fields between the two countries.

The vice premier visited the National Ayurved Research and Training Centre in Kirtipur on Wednesday. Minister for Health Girirajmani Pokharel and Nepali ambassador to China Leela Mani Paudyal welcomed the vice premier at the center, according to a press statement issued by the Ministry of Foreign Affairs (MoFA). Senior officials of the Ministry of Health and the centre had apprised the vice premier of the ongoing activities of the centre and spoke about the prospects of Nepal-China cooperation in the health sector.

KATHMANDU, August 13: The government has requested the Election Commission to provide umbrella as election symbol to the Rastriya Janata Party... Read More...