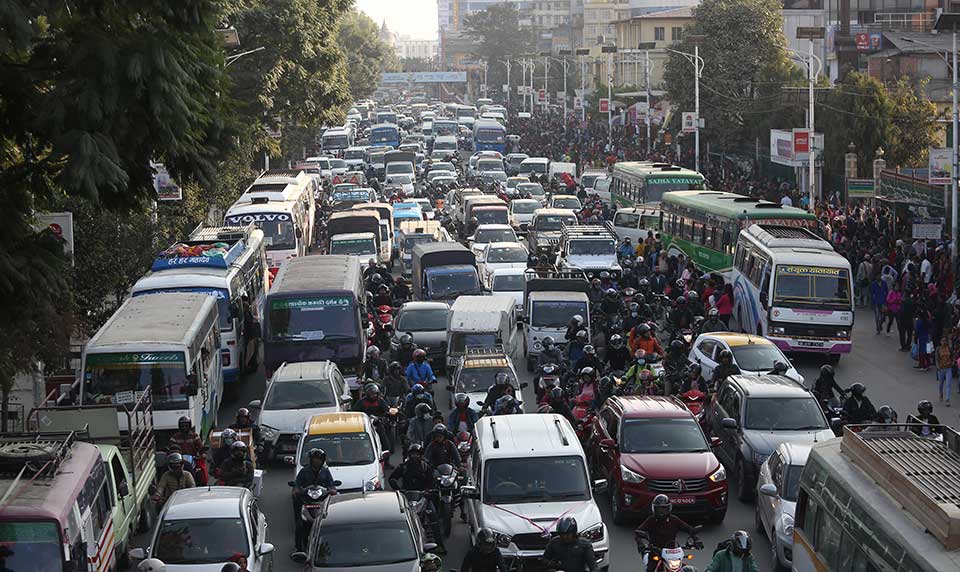 KATHMANDU, Dec 17: As traffic police enforced pick and drop rule in the core city areas in Kathmandu including Jamal, Ratnapark, Tundikhel and Bhadrakali starting from Sunday to reduce traffic congestion, commuters are least impressed with the idea that it would help them manage traffic effectively.

They argue that this idea will work only if this rule is enforced all over the city.

RJ Koirala, another passenger who was waiting for a bus from New Road to Gwarko, said although it normally takes half an hour to reach Gwarko public vehicles take over one hour to cover the same distance. On top of that, journey in public buses is often too inconvenient due to overcrowding.

“The pick and drop rule should be implemented all over the Valley. Only then, it will be effective. Or else, the conductor may stop the bus in other places for a long time,” he argued.

Kathmandu Metropolitan City (KMC) in coordination with the traffic police has enforced this rule only in the areas near Tundhikhel for now. The motive of this plan is to control traffic congestion by restricting passenger vehicles from waiting for passengers for a long time, KMC officials said.

The KMC has implemented the pick and drop rule from December 16, focusing on the core areas like, Sundhara, Old Buspark, Sahidgate and Jamal.

Talking to Republica, KMC spokesman Ishwarman Dangol said they plan to implement the pick and drop rule all over Kathmandu.

“This is just a trial. This rule will be enforced all over Kathmandu soon if we succeed in our trial,” he said.

The KMC officials said the rule was implemented for the convenience of the travelers and to control traffic jam in major thoroughfares of the city.

“We have collaborated with the traffic police, the Department of Transport Management and the city police for the effective implementation of the rule,” he said.

Chief of the Metropolitan Traffic Police Division SSP Basanta Panta said the rule will help manage traffic congestion. “We have mobilized additional traffic police personnel to monitor if public vehicles are halted for a long time,” he said. “Legal action will be taken against those who do not follow the rule.”

The international vegetarian conference is taking place in Kathmandu on November 15-16. ... Read More...

KATHMANDU, Nov 6: Despite various efforts by traffic police to reduce road accidents, on an average 160 people are killed... Read More...

KATHMANDU, June 16: A meeting of the National Assembly today unanimously endorsed a proposal tabled before it for deliberations on... Read More...