People’s lifestyle and climate changed in Jumla, not everyone is happy 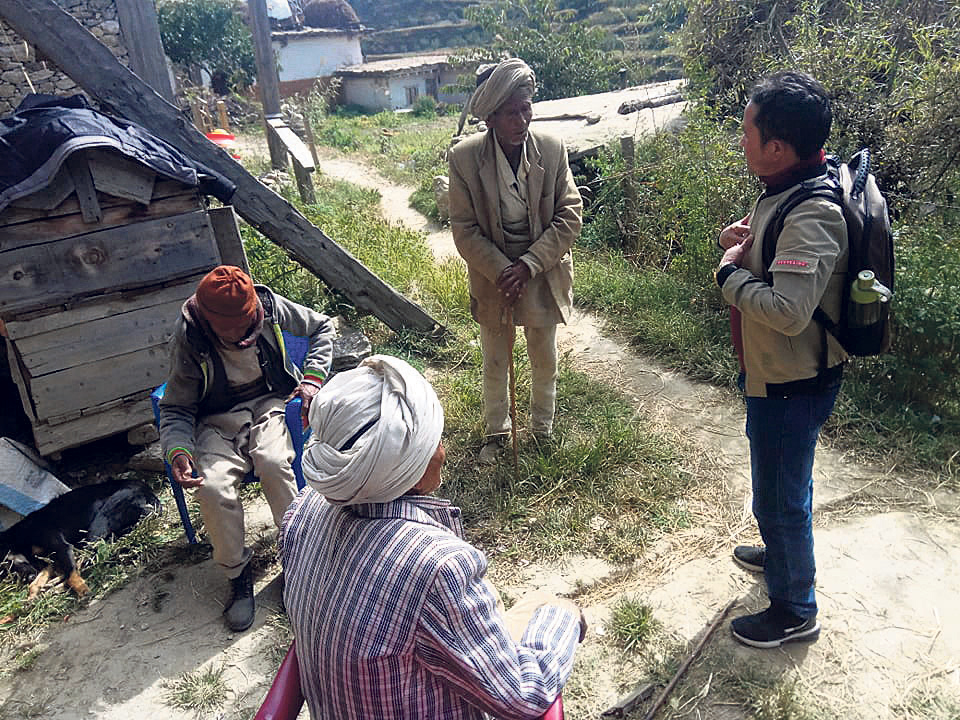 A group of senior citizens in traditional Jumla attire talk to a youngster in Jumla in this recent picture. Photo: Dhan Bahadur Budha

JUMLA, Oct 16: Winter doesn’t feel like winter to a local of Jumla Sampati Rawat, 70, anymore. Jumla’s weather has become hotter over the years, he says. “Neither is the monsoon as bothering as before, actually there is no downpour during the monsoon too,” he notes.

What looks equally interesting to this septuagenarian is the different lifestyle of Jumla residents.  “They have become dependent in everything. It wasn’t so in our times,” Rawat remarks.

According to Rawat, people in Jumla used to celebrate ‘Juhare’ instead of ‘Dashain’. These days, locals have almost forgotten to celebrate Juhare, as they celebrate Dashain, he said.

“I will tell you another very interesting thing, a bit sad fact actually. In the past, while returning from Kalapahad our people would carry home malaria on return. Many would fall sick and some would die. So only few risked their life go to Kalapahad,” he reminisced.

Jumla was a wonderful place in the past; its scenic beauty was mesmerizing. This is no more the same in Rawat’s observation. Snow would be seen in the mountains for months, and green pastures around would offer a great view.

As climate patterns changed with time, Rawat no more finds the natural beauty of his place as captivating as before.

“Next thing I remember is, we never heard of Tihar. We would not celebrate the festival here,” he reports. “These days, Bhaitika is celebrated across the district,” he said.

Rawat also claimed that the Teej celebration is also imported to the district. Women in Jumla these days celebrate the festival by singing and dancing during the Teej.

Rawat remembers that people were very active and hard working in the past. They would grow crops, vegetables and rear livestock. This would make them mostly independent in terms of food grains and finance. Similarly, they used to weave clothes of sheep wool.

“We didn’t have to buy food or clothes in our days. We were that much self-reliant. We used to have flocks of sheep and goats at home. There was no need for us to go to the market for essentials,” Rawat said going back to the memory lane. “Those were the days!”

Rawat does not feel good to see everyone wearing imported clothes these days. Clothes made elsewhere not impress him. “We used to wear traditional Bakkhu and woolen trousers that we used knit ourselves. Nowadays, everyone wears clothes brought from other countries. This makes us dependent on others,” Rawat said.

Rawat also recalled the now defunct barter system. Locals used to exchange crops and vegetables as per their need.

In the past, people would grow potato, beans, corn, and barley and so on in the fields. “Now both our fields and jungle areas have gradually decreased. Barren farmlands are becoming ubiquitous as more and more people do not want to work in farms. Similarly, our pastures are also declining fast,” Rawat said.

Shamans were popular among the people in the past. In some areas in the district, such practice is still alive. However, many people seek treatment from health workers and doctors these days. Rawat claims that shamans were not bad doctors. They had idea about herbs and several kinds of treatment, he asserted.

However, he said that reaching of roads to Jumla villages a good development. Basically during medical emergencies, transportation services become a boon. Similarly, locals no more have to walk for days to reach district headquaters.

“Due to the roads, people’s life has become easier. People get quick service during medical emergencies. Similarly, we used to walk for days to reach district headquarters, this is also no more the case,” he stated. Rawat however expressed reservations against ‘the new culture of family planning.’

Rawat also had some complaints against politicians. In his view, they have not been faithful to people. “We are being quite dependent on others. This kind of development is not good. Politicians, who vow to work for the nation, do not seem to be doing so,” he remarked.

“If they provide good leadership and direct the nation and its people in the right direction, our nation can develop on a sustainable basis. We should not be lazy, young people are very lazy these days,” he added.

JUMLA, Nov 28: On Sunday, Balaram Budha of Tila-9 became the first person to cast his vote at the polling center... Read More...