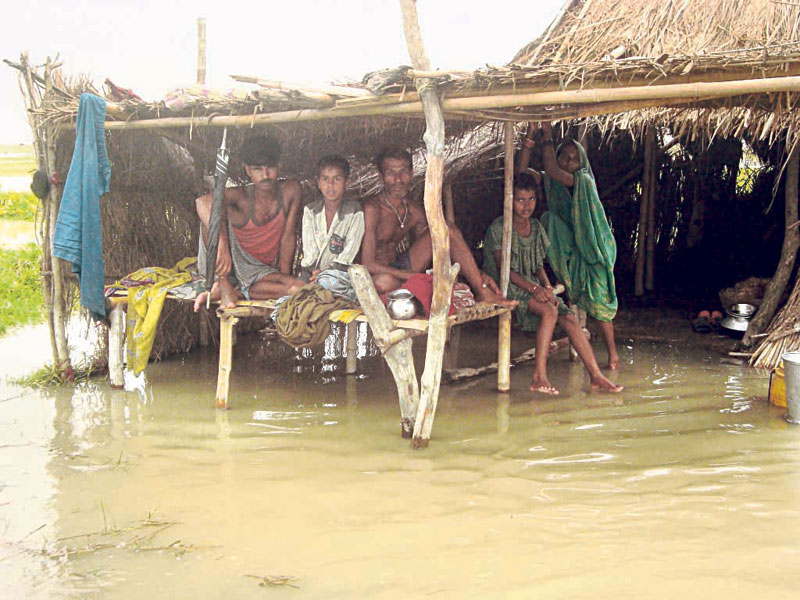 A family in Gobargaadha village in Rajbiraj huddles in their hut sorrounded by floodwaters on Wednesday.

RAJBIRAJ, June 23: Locals living in an island village in Saptari district have become terrified with the increasing level of water in the Saptakoshi River.

Gobadgadha village, which is popularly known as 'Tapu,' is surrounded by the Koshi River.
“Since last Tuesday, water flow in the river is on the rise,” Kusheshwar Yadav, one of the terrified locals, told Republica over phone. “Water is still far from human settlement. If the level of water keeps increasing, the village will be submerged.”

According to him, the entire village is at risk with the increasing level of water.

“We do not have sufficient boats either. As the human settlement is surrounded by water, it is very difficult for us to escape from here,” Yadav added.

The water level in the Saptakoshi River has increased due to incessant rainfall in eastern Tarai and mid-hill areas since last Tuesday.

As per a record of Koshi Barrage control room, the water level in the river has increased to 184,000 cusec by 1 pm on Wednesday while it was measured 126,000 cusec on Tuesday morning.

Superintendent of Police (SP) Bhim Prasad Dhakal, who is also Chief of the District Police Office (DPO), Saptari, said that police are in regular contact with the locals.
Although water has not entered into the village, there is still risk, according to SP Dhakal. Security personnel have been kept on standby to prevent any untoward incident.

Well-to-do families of Gobadgadha village have already left years ago. Still, many of the households are compelled to live in the village. “We did not find any alternative to relocate ourselves,” another local Indra Narayan Yadav said. “We have neither properties nor any source of income to leave the village. Despite vulnerability, we're compelled to live here.”
Flood is not a new phenomena for the residents of Gobadgadha village. Locals here live in the village, putting their lives at risk for three to four months every year.

With the increasing level of water, locals from the village have risk their lives on boat to reach Hanumannagar, the nearest safest location for them.

The village, which has been merged with Yoginimai-Hanumannagar municipality this year, is one of the most remote area.

Likewise, Sakarpura, Rampura, Malhaniya, Launiya among other villages in the district are also vulnerable to floods with the increasing level of water in Khando River due to incessant rainfall.

DANG, Feb 5: “The floods eroded all our land. My house still stands, but for how long?” asked Rajbaji Chaudhary of... Read More...

DANG, Feb 3: “The floods eroded all our land. My house still stands, but for how long?” asked Rajbaji Chaudhary of... Read More...