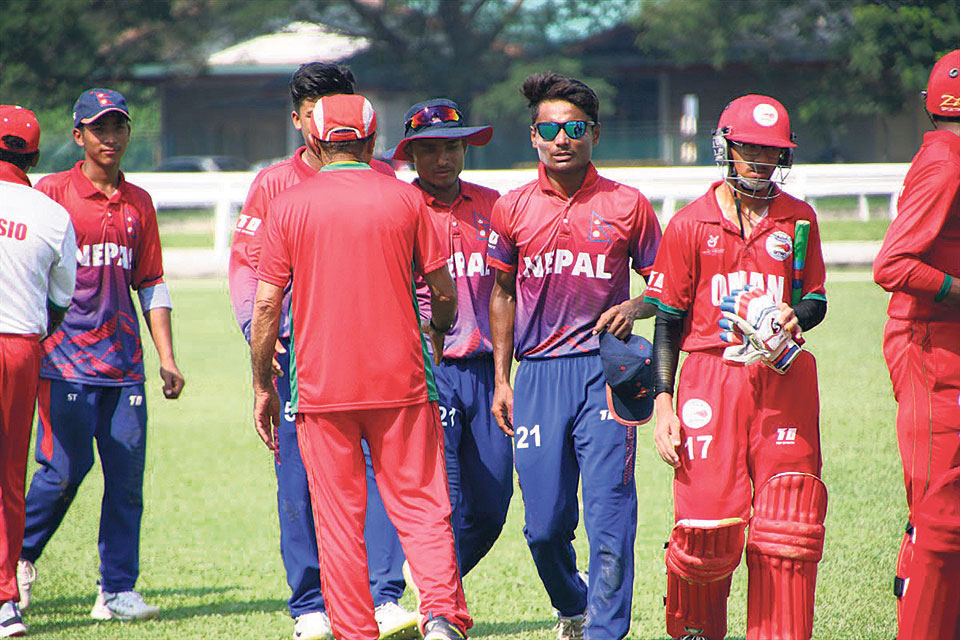 KATHMANDU, April 17: Skipper Rohit Kumar Paudel scored 75 runs to provide a win against Oman by whopping 150 runs in the ongoing ICC Asia U-19s World Cup Qualifier played at Selangor Turf Club in Kuala Lumpur, Malaysia on Tuesday. This is the Nepali team’s third win in four matches in the league.

Player of the match Paudel smashed five boundaries and two sixes during his 81-ball stay to help Nepal put up a total of 229 runs before getting all-out in 43.2 overs. Oman was bundled out for paltry 79 in 44.1 overs as Nepal went on to collect two more points and take its tally to 6 points.

However, the United Arab Emirates (UAE) continued its winning streak defeating Singapore by nine wickets to stay on top of the table with four wins and eight points. The UAE that defeated Nepal by a run under DLS method remains favorites to progress to the ICC U-19 Cricket World Cup to be held at South Africa in 2020. Nepal and the UAE will play their last matches on Thursday.

Nepal’s off-spinning all-rounder Sarraf was once against pick of the bowlers with bowling figures of three wickets, 24 runs and 2 maidens in his full quota of 10 overs.

Bhim Sarki, Kushal Malla and Kamal Singh Airee also shared a wicket each. Airee was introduced last in the innings delivering three maidens on the trot ending the gritty partnership between Amanpreet Sirah and Jeel Tanna which frustrated Nepal for 84 deliveries despite losing eight wickets for 65 runs at the 21.5 overs stage.

Both top scored with 13 runs each from 45 and 53 deliveries respectively. None of the other Omanis batsmen were able to reach double figures in the match.

Earlier, Oman won the toss and invited Nepal to bat first. Nepal made three changes to the playing XI with Avishek Basnet, Pratish and Tamang coming in for Aasif Sheikh, Rashid and Dhakal respectively.

Nepal lost both the opening batsmen Sarraf and Rit Gautam, number 3 batsman Avishek Basnet within 16 overs pushing Nepal in a tricky position of 62 runs for the loss of three wickets. Nepal further lost Sandeep Jora and Hari Bahadur Chauhan cheaply to reduce Nepal to 81 runs for the loss of five wickets by the end of 20 overs.

Skipper Paudel jointly with Sarki, shared a partnership of 92 runs to bail Nepal out of the trouble. Sarki contributed 39 runs off 43 deliveries including two boundaries and a six.

However, Pratish provided late boost to the total score smashing 41 runs from 23 deliveries which included two boundaries and four sixes to take Nepal from 176 runs for nine to 229 all out. Muzahir Raza, Sanjay Ravindra, Azam Ali and Tanna shared two wickets each to dismiss Nepal in 45th over.

In third match of the day, Kuwait U-19 defeated home team Malaysia U-19 by 43 runs to register its third win of the league. Nepal, with same number of points like Kuwait, remains at second place with better net run-rate. Both teams will face each other on Thursday in a must-win match to remain in the hunt for world cup qualification if the UAE stumbles against Oman on same day.

DOHA, Dec 16: The World Cup is heading to Qatar in 2022 and plans are gathering pace with the unveiling... Read More...