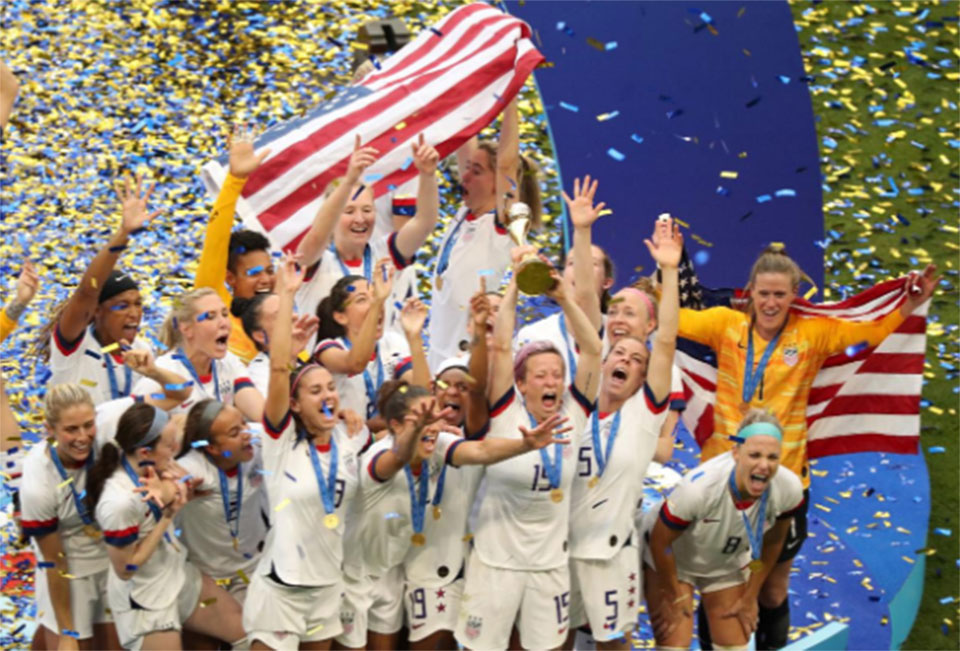 LYON, July 8: The United States won a record-extending fourth women’s World Cup with a 2-0 victory over the Netherlands on Sunday as second-half goals from Megan Rapinoe and Rose Lavelle confirmed their status as the leading power in the women’s game.

The defending champions struggled to gain dominance for an hour before a Rapinoe penalty, her sixth goal of the tournament, broke the deadlock and a fine individual effort from Lavelle in the 69th minute put the outcome beyond doubt.

The Dutch, who are the European champions, ran out of steam after Rapinoe opened the scoring in the 61st minute, having done more than any team to frustrate the Americans.

A perfect occasion for Rapinoe, whose outspoken views have been most prominent on the pay disparity between men and women players, was capped when FIFA chief Gianni Infantino was booed amid chants of “equal pay, equal pay” by U.S. fans.

At 34, Rapinoe is unlikely to be back on this stage in four years’ time, but it is hard to imagine her walking away from the battles she has led with the U.S. Soccer Federation and world governing body FIFA over fairer terms for the women’s game.

However, amidst the firework celebrations after the final whistle, Rapinoe’s thoughts were on her team’s triumph — their second in a row after the 2015 victory in Canada.

“It’s like history. I don’t know how to feel right now. It is ridiculous,” said Rapinoe.

“We’re crazy that’s what makes us special. We just have no quit in us. We are so tight. We will do anything to win.”

Rapinoe’s earlier comments, regarding a rejection of any eventual invite to the White House, brought her into the centre of political debate but the side’s win was greeted positively by President Donald Trump.

“Congratulations to the U.S. Women’s Soccer Team on winning the World Cup! Great and exciting play. America is proud of you all!” tweeted Trump.

New York city mayor Bill de Blasio said the team would receive a “ticker tape parade” down the ‘Canyon of Heroes” in Manhattan on Wednesday.

RAPINOE RETURNS
The purple-haired Rapinoe was back in the starting lineup after sitting out the 2-1 semi-final win over England with a slight muscle strain.

Her place in the side came at the expense of Christen Press while Netherlands left-winger Lieke Martens was fit to play after overcoming a toe injury.

The Dutch made an aggressive start, with some strong challenges, and midfielder Sherida Spitse picked up a booking in the 10th minute for a lunging challenge on Lavelle.

The U.S, who had scored in the opening 12 minutes of every previous game at this tournament, were struggling to settle as their opponents harried and closed them down quickly.

The Netherlands looked to hit the Americans on the counter-attack and that approach almost bore fruit in the 26th minute when Vivianne Miedema released Lineth Beerensteyn through the middle but U.S. keeper Alyssa Naeher was alert.

However, as the half wore on, the U.S. gradually gained the upper hand and Dutch keeper Sari van Veenendaal did well to parry a fierce first-time drive by Julie Ertz in the 28th.

Then Alex Morgan turned a low cross from Rapinoe goalwards and Van Veenendaal tipped the ball against the post before safely gathering it.

The pressure was mounting as Morgan brought the Dutch keeper into action again with a fine shot on the turn in the 40th.

U.S defender Kelley O’Hara had to be substituted at halftime, following a clash of heads with Martens, and Ali Krieger came on at right-back.

VAR PENALTY
Encouraged by their first half resilience, the Dutch stuck with the same tenacious approach after the break but their aggression proved to be their downfall.

Stefanie van der Gragt’s foot caught Morgan’s upper arm after a high challenge in the box and the American fell to the ground. After initially awarding a corner, the French referee turned to the video review and then gave a penalty.

Rapinoe took the responsibility and coolly slotted the ball past the almost stationary Van Veenendaal to bring to life the large American contingent in the capacity crowd of 57,900.

Suddenly the U.S. were more relaxed and the Dutch appeared to lose not only their cohesion but also their energy.

Perhaps sensing that dip, Lavelle took the game directly to the Dutch - bursting out of midfield towards the heart of the defence and dropping her shoulder to the left before unleashing a sweet shot into the bottom corner to make it 2-0.

The Americans were suddenly swarming all over the Dutch, Tobin Heath, Morgan and Crystal Dunn all threatened to add a third goal.

If the Dutch were going to get back into the game a set-piece looked the most likely route and Spitse went close with a free-kick in the 80th minute that flashed just wide.

But that was their last attempt at making a comeback that, in truth, never looked likely.

The Americans had outlasted the Dutch and a fourth World Cup crown was theirs to celebrate with their adoring fans.

KATHMANDU, July 19: Nepal veteran bowler Shakti Gauchan has announced on Wednesday that he will retire from the national colors after... Read More...

Man dies after choking on piece of meat
26 minutes ago

Nearly 15,000 goats sacrificed at Rajdevi temple in Janakpur
32 minutes ago