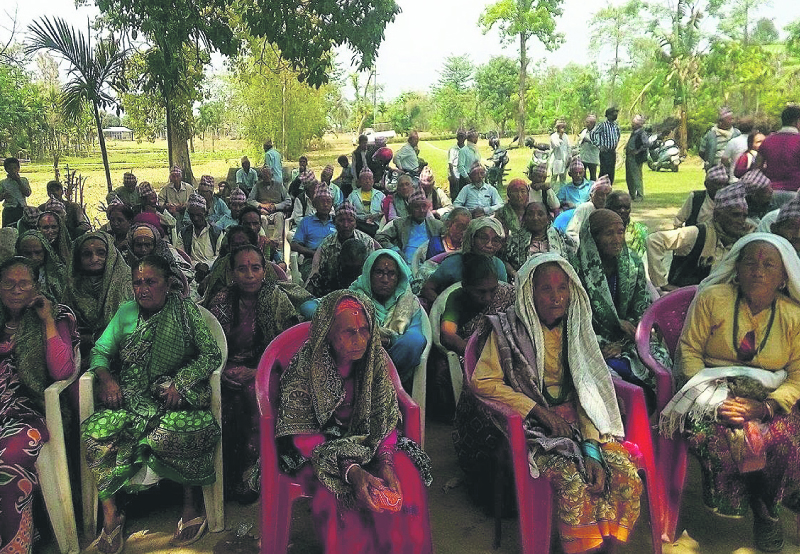 JHAPA, June 9: Seventy-eight-year-old Damber Timilsina seems very excited these days. The reason is that he believes he is likely to get hiked allowance pretty soon. Promises made by political party leaders to woo the elderly people in the first phase of election have given him the positive feeling.

“The parties have been trying to persuade old people like us. We saw it in the first phase of election. Personally, even I am suggesting the same thing to our local candidates here,” he said, adding that he would definitely vote for those 'who promise big things for people of his age'.

In some municipalities where the elected representatives have already assumed office after the first phase of election, they have already made official announcement of allowance hike for elderly people, establishment of old age homes and temples, health facilities and so on.

The second phase of election is going to take place on June 28 in several parts of the country including Jhapa. Timilsina says he is not going to miss the polls because he believes that 'parties have something for old people as well'.

“It feels like our days are back! Though for the sake of vote, they have kept us under consideration,” noted the local of Birtamod-1.

To those candidates who reach out to his door asking for vote, he openly asks them to hike allowance. “Even if you fail to do so, please make it easier for us to claim the allowance. There should be no hassles,” he suggests them.

According to Jalkumar Gurung, mayoral candidate of Jhapa from Nepal Congress, it is not just Timilsina who has big expectation from him and other candidates. All elderly people are highly concerned about the old age allowance and other facilities, he said.

“Personally, I am very committed for it. When I read out my agenda to them, they bless me as my agenda does justice to the old people,” he said.

Gurung further said that the need to attract elderly voters is crucial for all parties as 'their number is really big'.

Arjun Karki, candidate for the post of chief of Mechinagar-4 Bahundangi, has no different view. According to him, elderly people are concerned for themselves as well as for the country.

“They are the most neglected people. Looking forward to some good plans and policies for them is not unnatural. At the same time, they feel that they have little time left and want to see for themselves the development of the country,” he said.

JHAPA, May 10: As part of their poll campaigns, political parties in Jhapa are trying to woo the senior citizens by... Read More...

KATHMANDU, Jan 26: While the government's latest decision to reduce the  eligibility age for the elderly allowance suggests that citizens above... Read More...