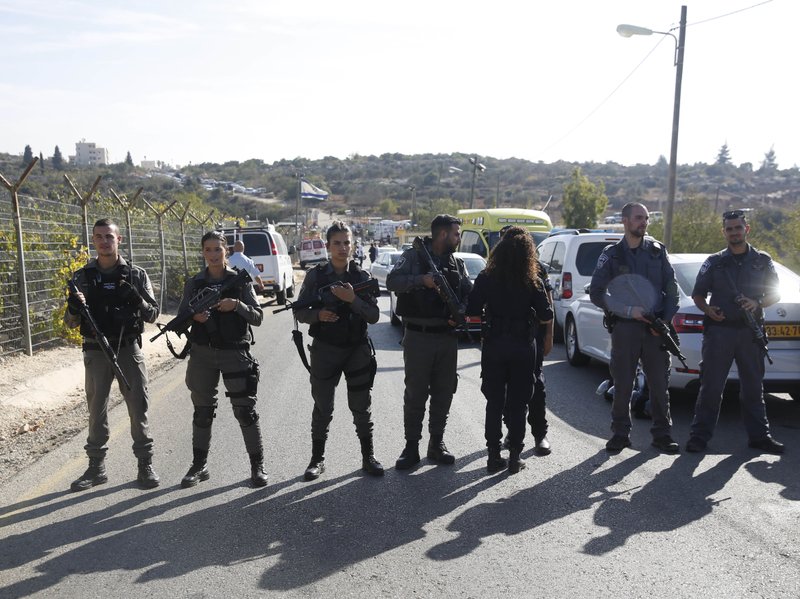 JERUSALEM, Sept 26:  A Palestinian attacker opened fire early on Tuesday at the entrance to a settlement outside Jerusalem, killing three Israeli security men and critically wounding a fourth, Israeli police and medical services said, in one of the deadliest attacks in a two-year spate of violence.

Israeli officials said the attacker was a 37-year-old Palestinian father of four, with a valid work permit in Israel and a troubled personal life who appeared to have acted alone.

The attack comes at a tense period amid the Jewish high holidays and is likely to complicate the mediation efforts of U.S. peace envoy Jason Greenblatt who just arrived in the region for meetings with Israeli and Palestinians leaders.

Speaking at his weekly Cabinet meeting, Israeli Prime Minister Benjamin Netanyahu said the attack was partially a result of systematic Palestinian incitement and said he expected Palestinian President Mahmoud Abbas to “condemn this attack and not try to justify it.”

Police spokeswoman Luba Samri said the attacker approached the back gate entrance of the Har Adar settlement, hiding among dozens of Palestinian day laborers who were being checked by security forces.

The man aroused police suspicions and was asked to stop, Samri said. At that point, he pulled out a weapon and began opening fire at the forces from close range. The attacker was then shot dead by other forces at the scene.

The casualties were identified as Solomon Gavria, a 20-year-old policeman, and two private security guards — Yousef Othman and Or Arish, who were both 25 years old. The Magen David Adom medical service said that in addition to the three killed, a fourth Israeli man, aged 32, was evacuated to hospital in critical condition.

Har Adar is an upscale community west of Jerusalem, straddling the seam line between the West Bank and Israel proper and known for its good relations with its Arab neighbors — an unusual target in the wave of violence that Israel has been coping with over the past two years.

Shay Retter, the head of Har Adar’s security committee, said between 100 and 150 Palestinian laborers typically enter the community every day for work. Local residents said they knew the attacker from previous work he had carried out in the community and were shocked to hear what he had done. The military imposed a closure on the nearby Palestinian village of Beit Surik, the home of the attacker.

“Before talking about any kind of negotiations, the world must demand of the Palestinian Authority to stop its incitement and encouragement of terror,” he said, alluding to Greenblatt’s visit and his goal of securing concessions for Palestinians.

Minister of Intelligence Israel Katz was even blunter.

“The attack is also a message to special U.S. envoy Greenblatt,” he said. “Israel’s security was and yet remains the supreme consideration in the government’s policy, and is above any other consideration of improving and easing the lives of the Palestinians.”

Netanyahu pledged that as a punitive measure, the attacker’s home would be demolished and working permits of his extended family would be revoked.

However, Israel’s internal Shin Bet security service downplayed ideology as a motive, saying the attacker was plagued with personal issues.

The attacker was identified as Nimr Mahmoud Ahmed Jamal and the Shin Bet said its preliminary investigation indicated there was significant violence in his family. His wife had recently fled to Jordan to escape his abuse and left him with their four children, it said.

In a message to his estranged wife that he asked her to share on Facebook, Jamal praised her and called himself a bad husband.

“I was very jealous and I’ve done terrible things in the community,” he wrote. “I ask you to forgive me and take care of the kids.”

Since September 2015, Palestinians have killed 51 Israelis, two visiting Americans and a British tourist in stabbings, shooting and car-ramming attacks. Several of these attacks were carried out by individuals struggling with domestic and emotional issues whose acts were subsequently cloaked in nationalism.

During that same time, Israeli forces have killed over 255 Palestinians. Israel says most of them were attackers and others died in clashes with Israeli forces. Most of the attacks have been stabbings against security forces, primarily in the West Bank.

Israel blames the violence on incitement by Palestinian religious and political leaders compounded on social media sites that glorify violence and encourage attacks. Palestinians say the attacks stem from anger and frustration at decades of Israeli rule in territories they claim for a state.

The frequency and intensity of attacks have lessened of late but such an incident, coming amid the Jewish high holiday, threatened to ignite them anew.

Gaza’s Islamic Hamas rulers praised the attack but stopped short of taking responsibility for it. In a statement, the group called the assault a “heroic operation” that was a “natural response” to Israeli aggression against Palestinians and proved that the Palestinian uprising was still alive.

Israeli President Reuven Rivlin said, “the cruel terror attack proves once again the daily front that our security forces face in the most important mission — protecting and defending the safety of the citizens of Israel.”

Revenue collection from mountain climbing doubles this year
43 minutes ago