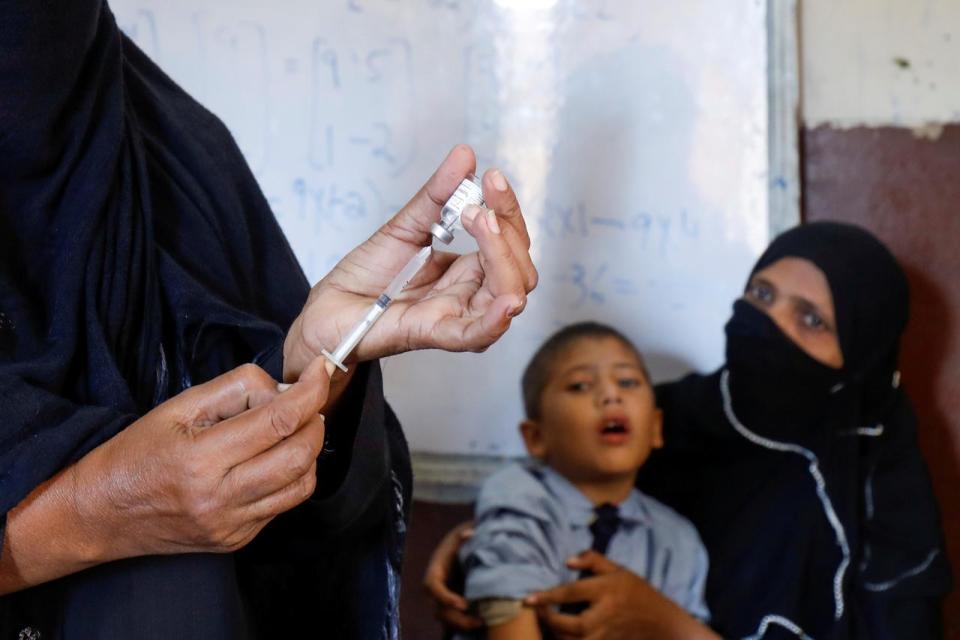 FILE PHOTO: A medical staff member holds a bottle of anti-typhoid vaccine to be given to children during the immunisation campaign at a school in Karachi, Pakistan November 20, 2019. REUTERS/Akhtar Soomro/File Photo

Doctors suspected typhoid, but when the most common antibiotics failed to work, the boy’s family began to panic.

Sajjad is one of more than 11,000 people, mostly children, to have contracted a drug-resistant strain of the infection in the country since 2016, and which experts say risks spreading internationally.

He survived, but hundreds have died, predominantly in the southern province of Sindh.

In response Pakistan’s government, already battling outbreaks of polio and dengue, has launched a huge foreign-funded vaccination drive that began on Nov 15.

Some 3.4 million children have been vaccinated in the last four days in Karachi and the neighbouring city of Hyderabad where the outbreak was first reported, said James Fulker, a spokesman for GAVI, a Geneva-based partnership funded by the Bill & Melinda Gates Foundation that is administering the vaccine.

Kept out of school for three months, Sajjad passed the time by tallying the daily rounds of shots given during his treatment - 84 in all.

“I had not much to do during my illness. I used to keep count of injections I was being given,” he said.

The latest strain is resistant to all but one antibiotic used to treat typhoid, a bacterial infection transmitted by human faeces. If it develops resistance to this final antibiotic treatment, disease experts say, death rates among those infected could rise dramatically to as much as 20%.

Sanitation is a major issue in Pakistan, especially in Karachi, a sprawling port city of more than 15 million on the Arabian Sea.

Here, political infighting between two regional parties over refuse collection has seen huge mounds of garbage pile up in the street.

Reuters visited several areas where the vaccine was being administered, predominantly in low income areas with poor quality, illegal housing.

“Typhoid is a nightmare in countries like Pakistan because the hygienic situation is not good,” said Muhammad Khalid Shafi, a paediatrician and associate professor at Dow Medical College in Karachi.

Resistance to immunisation programmes has hampered attempts to stamp out other diseases.

In July, officials working on polio prevention told Reuters that parents suspicious of mass immunization campaigns have been getting hold of special markers, used by health workers to put a coloured spot on the little fingers of children who have been vaccinated.

They said in some areas, as many as 8% of families may be refusing or avoiding vaccination, a level which would mean the disease is not eradicated.

In several areas of Karachi, local mosques make announcements urging parents to get their children vaccinated against typhoid, especially in low-income neighbourhoods.

RAUTAHAT, April 20: Dozens of locals in Gadhimai rural municipality, Rautahat district, have been infected with chickenpox, which has been spreading... Read More...