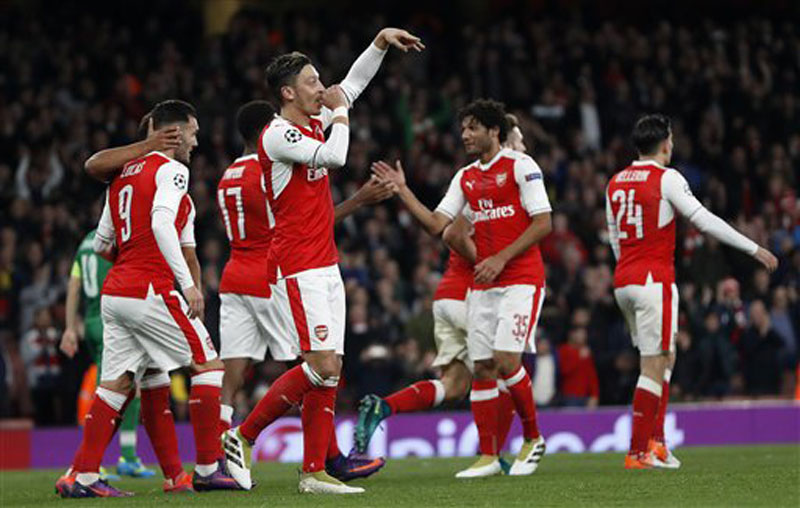 LONDON, Oct 20: Mesut Ozil scored his first ever hat trick as Arsenal took a big step toward qualifying for the knockout stages of the Champions League with a 6-0 rout of Ludogorets at the Emirates Stadium on Wednesday.

The 28-year-old German midfielder capped off an impressive display against the Bulgarian champions to earn the match ball with three goals in the space of 31 second-half minutes. He's now scored six goals in 10 appearances for Arsenal this season.

"He looks like he gets the taste to score goals," said Arsenal coach Arsene Wenger, who was celebrating his 100th European victory in charge of the Gunners. "We want him to be a provider and a scorer and it looks like he's slowly moving to that better balance."

The victory over Ludogorets — Arsenal's seventh in a row — means that the team is top of Group A of the Champions League at the halfway mark with seven points from three games. Arsenal has a superior goal difference over Paris Saint-Germain, which also has seven points following its 3-0 victory over Swiss side Basel on Wednesday. Ludogorets languishes in bottom place with just one point. Basel also has one point.

"We were fast and dangerous," added Wenger, whose team is second behind Manchester City in the Premier League standings. "We are confident and we must stay focused in every single game."

In the early stages of the game, Ludogorets posed a threat to Arsenal from its swift counter-attacking, but Arsenal took the lead in the 13th minute through Alexis Sanchez. Put through on goal by a well-timed pass from Alex Oxlade-Chamberlain, Sanchez advanced onto the Ludogorets goal before chipping goalkeeper Vladislav Stoyanov in style.

Ludogorets had chances to level, notably in the 32nd, but Wanderson's 15-yard (meter) shot struck the base of Arsenal's post.

But that was as close as the Bulgarian side got to getting back on level terms. In-form striker Theo Walcott doubled Arsenal's lead in the 42nd with a curling shot from 20 yards (meters) that went beyond the reach of the diving Stoyanov.

With eight goals in 10 appearances, Walcott has been impressive this season after the disappointment of missing out on the England squad for the European Championship. Wenger said Walcott has become "much more resilient" and is playing with "more freedom."

Oxlade-Chamberlain put the game beyond any doubt within a minute of the restart, calmly slotting the ball past Stoyanov from inside the area after a low cross from Kieran Gibbs was diverted into his path.

Then it was all about Ozil. The midfielder made it 4-0 in the 56th with another calmly taken goal after a long ball through the middle of the Ludogorets defense by Santi Cazorla.

Ozil got his second in the 83rd minute with a side-footed finish from eight yards (meters) out. He capped off his — and Arsenal's night — with a left-footed volley four minutes later.

"Brilliant team performance," Ozil said in a tweet after the game. "And very happy about my first ever hat trick!"

Arsenal will now look ahead to a potential group decider against PSG next month.

Fraud on the rise in foreign employment
8 hours ago

NC leading in vote-count under FPTP category of HoR and PA elections
12 hours ago
Why is Climate Finance a Focus Area for Nepal?
4 hours ago