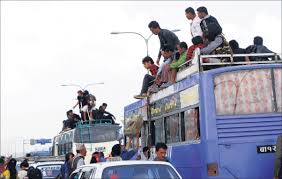 KATHMANDU, Oct 3: With Dashain festival right round the corner, the New Bus Park at Gongabu bustles with activity as prospective travelers make serpentine lines for bus tickets to reach their destinations.

As many as 700,000 people have already booked their tickets. The number of passengers traveling out of the Valley for the Dashain festival, according to the Federation of Nepali National Transport Entrepreneurs, is half of the total passengers.

“As of now, nearly 700,000 tickets have already been sold out. It's around 50 percent of the total seats needed for Dashain passengers,” said the federation's general secretary Saroj Sitaula.

More tickets have been sold out for western Nepal as compared to other regions. Krishna Dahal, who heads the Kathmandu branch of the East-West Transport Entrepreneurs Association, said more than 70% of the total tickets have already been booked.

No customer has returned empty handed till now, according to Dahal.

A majority of passengers seek to travel to western Nepal; destinations include Dang, Salyan, Mahendranagar, Jajarkot, Gulmi, Tulsipur and so on. Padam Thapa Magar, currently staying at Bhaktapur, came to the bus park at 5:30 am and stood in line for over an hour and a half with his turn still nowhere in sight.

“The 10% inflation in bus fares is not a big deal. I am ready to pay an extra Rs 1,000 if that's what will ensure me a ticket,” Magar said out of desperation as he stood in line on Monday morning.

To make lines more organized, travelers led a self-initiative by developing a 'coupon system'. According to Chataman Aryal, a passenger, each person was assigned a coupon numbered 1 and above, ordering the individuals who are next in line to receive the ticket in a systematic order, giving priority to those who arrived earliest at the bus park. “The objective was to ensure that no one jumps the queue."

Despite Dahal claiming that service is being provided smoothly, a few people reported that they had to return home empty-handed. Kamala Neupane, who came earlier on Friday for tickets had to return empty-handed. Circumstances didn't change on Sunday morning as well with no tickets to Kailali available for October 12.

Opinions regarding the recent 10% price hike on tickets enforced by the government also remain divided. While some believe that it is natural for the transport fares to rise in line with the hike in fuel prices, others said it was wrong to hike the transport fare ahead of the Dashain festival when the passenger numbers are at their highest.

Kathmandu, Sept 18: People dwelling in the capital city planning to go home for Dashain festival this year have been... Read More...