Over 15,000 quake victims in Barpak yet to lay foundation of their houses 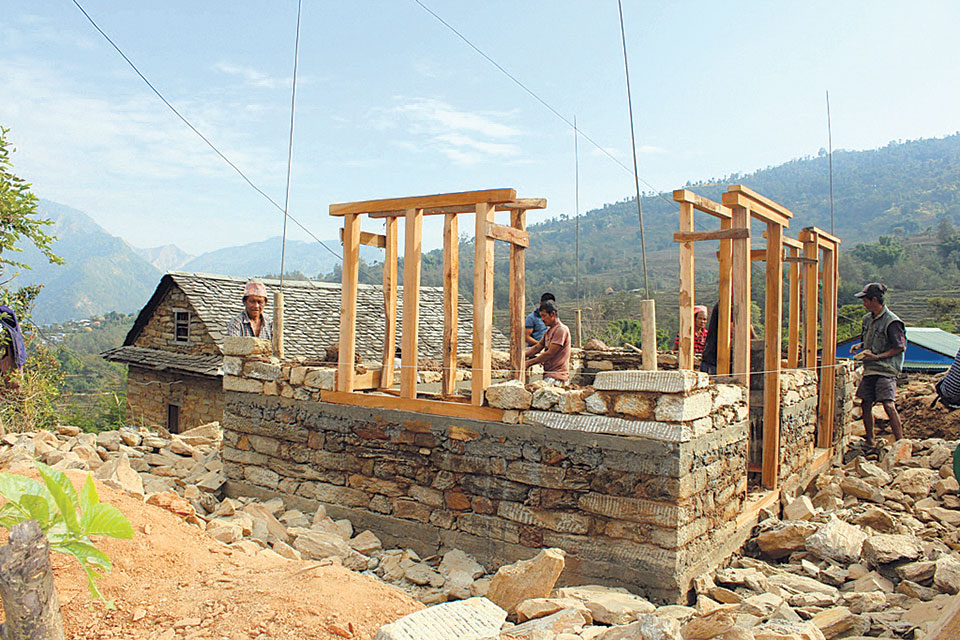 An under-construction house of a quake victim in Barpak. Photo: Republica

GORKHA, Jan 7: Records maintained by the District Project Implementation Unit (DPIU) of the National Reconstruction Authority (NRA) show that of the total 70,768 beneficiaries in Barpak, only 63,100 have received the first tranche of the reconstruction grant to rebuild their houses destroyed by the earthquake of April 2015.

Barpak Rural Municipality was the epicenter of the monstrous earthquake which claimed hundreds of lives and damaged thousands of houses. Some 10,000 beneficiaries here have not received the second tranche while there are some 7,000 beneficiaries who have not even got the first tranche of the grant.

Those who have begun the construction of their houses have already accepted the second installment of the quake grant. Currently, there has been no obstruction or delay in the reconstruction work, all thanks to the efforts made by the local representatives to speed up reconstruction. Another reason behind the intensified reconstruction is the deadline set by NRA.

"We make sure that there is no dillydallying in signing recommendations, as soon as the victims submit the supporting documents," said Shiva Gurung, chief administrative officer of Barpak Sulikot Rural Municipality. Among the 7,000 quake victims who are yet to receive the first tranche, around 2,000 are squatters.

Ram Saran Acharya, chief of DPIU, stated that the beneficiaries have ignored their repeated pleas to contact the authorities concerned for receiving the grant. "There are so many victims who have accepted the first tranche but haven't started rebuilding their houses. This has made it difficult for us to ascertain the total number of victims who have actually not even laid the foundations of their houses," said Acharya.

NRA had urged the wards and rural municipalities to collect and submit the exact details of the quake victims with the progress on the reconstruction of their houses. Not just that, those who can afford to rebuild their houses on their own and those who accepted the money with the ill intention of taking advantage of the government money were told to return the grant. So far, 17 people have returned the first tranche of the grant.

Those who cannot rebuild their homes within the given deadline have also chosen to return the grant.

KATHMANDU, March 8: Five companies have been shortlisted for carrying out study required for placing Nepal's own satellite in orbit. Read More...