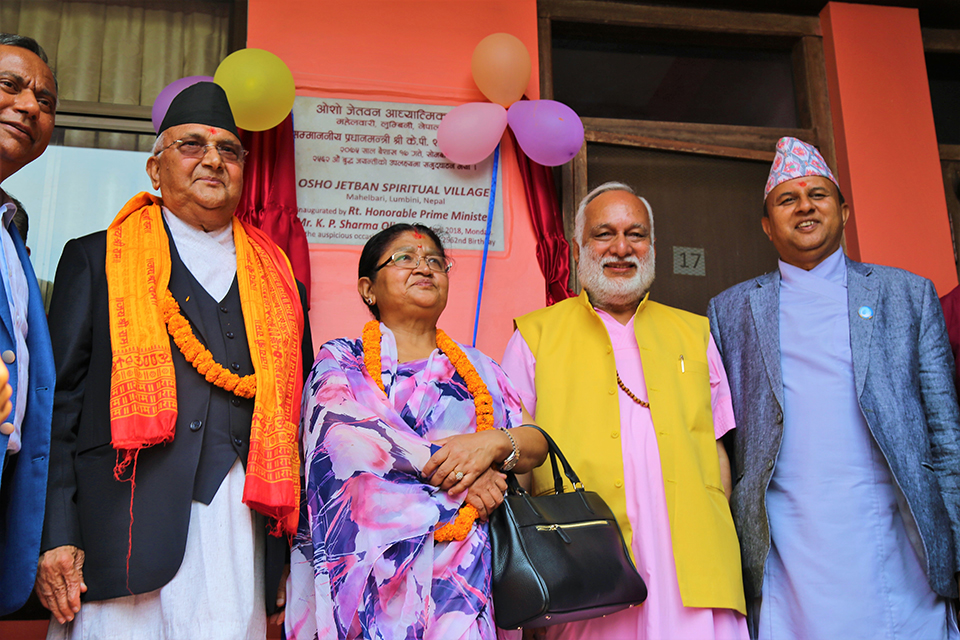 PM Oli unveiled the marble epitaph on the main building of the ashram that marks the inauguration ceremony. Addressing the gathering of more than 200 sannyasins in the meditation hall, PM Oli applauded the joint effort of Swami Anand Arun and Osho sannyasins of Nepal for having given shape to the dream of a commune.

"Everywhere in the world the communes have failed but you have made this dream a success," he said.

"A mutual property, a mutual field and distributing everything equally does not make a commune successful. A mutual understanding and a harmonious relationship between the members of the commune is needed for a commune to be successful and  I see it being fulfilled in all Osho communes in Nepal", he further added.

Calling Osho and Buddha as great revolutionaries, the Prime Minister also joked about his own restrictions of speaking bold revolutionary truths despite of his willingness to do so being a politician dependent on public votes.

"Osho was a great genius and a man way ahead of his time and what happened to Osho is the destiny of all geniuses ahead of their times," he said comparing Osho's destiny to that of Socrates, the greek philosopher.  "Socrates was made to drink poison because he challenged the outdated and orthodox beliefs of that time. It is not a surprise that Osho was prosecuted and denied entry into more than 20 different countries, it was the price he had to pay for speaking the truth that he had seen." the Prime Minister added.

Also speaking during the program were Chief Minister of the State Shankhar Pokharel, entrepreneur Upendra Mahato and Swami Anand Arun. Swami Anand Arun gave a brief description of the Osho movement in Nepal and informed about the 14 Osho communes, 100 Osho Centers and 90,000 Osho sannyasins in Nepal.

KATHMANDU, July 1: In order to protect the birthplace of the Buddha, the Supreme Court on Sunday has ordered a... Read More...

KATHMANDU, May 2: A special commemorative event was organized at the United Nations (UN) Headquarters  in New York on Tuesday... Read More...