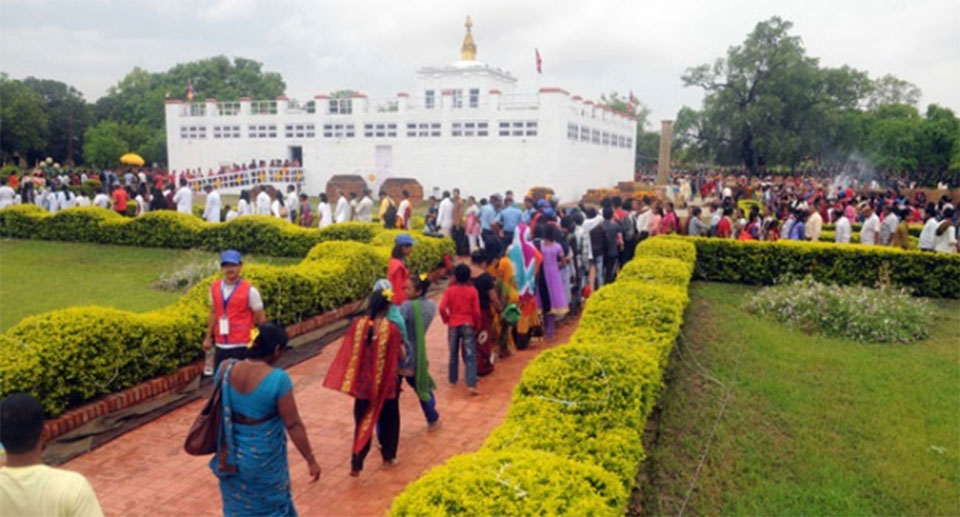 KATHMANDU April 30: Prime Minister KP Sharma Oli has said that Gautam Buddha remains a symbol of pride for all Nepalis, as he made a huge contribution to human welfare after being born in Nepali territory.

In a message today on the occasion of 2562nd Buddha Jayanti, he said that that the enlightenment achieved by Gautam Buddha, the profounder of world peace is equally relevant today. "It is because Buddha's view showed the path to non-violence, harmony and human welfare that they are so popular around the world today," he said.

The Prime Minister also wished that the day inspire us all to move ahead by internalizing the spirit of global fraternity of Buddhist religion.

Also today, in a message of best wishes on the occasion of Ubhauli, the greatest festival of the Kirant community, Prime Minister Oli has said that Kirant is rich in various norms and values and culture, while the festival also carries great cultural and social significance in the country.

He has also wished good health, long-life, peace and prosperity to all the Kirant brothers and sisters inside and outside the country.

Likewise, President Bidya Devi Bhandari has extended best wishes to all those who believe in the message of peace, non-violence, harmony and co-existence of Gautam Buddha including to the Buddhist community, on the occasion of the 2562nd Buddha Jayanti.

In a message of best wishes today, President Bhandari said if we internalize the Buddhist philosophy then internal peace and fraternity are unavoidable, while it will also facilitate unity, tolerance and goodwill among all those oriented towards social development and lasting peace.

She has also wished that this holy day inspire the entire human kind to follow Buddha's principles mutual goodwill, harmony and non-violence.

Meanwhile, on the occasion of Ubhauli festival, President Bhandari has extended best wishes for the happiness, peace and prosperity to all people of Kirant community in and out of the country.

Similarly, Vice President Nanda Bahadur Pun also extended best wishes to Nepalis, who are in and outside the country, on the occasion of Buddha Jayanti and Ubhauli festival.

In his message of best wishes on the occasion, Vice-President Pun said that the importance and relevance of Buddha's messages of peace and non-violence have further increased in the present world, adding that fraternity, goodwill and sustainable peace would be established in the country and the entire world if the messages of the Buddha were internalized.

Meanwhile, Nepali Congress President Sher Bahadur Deuba has said that peace was the first priority of the party.

In his message on the occasion of Buddha Jayanti, Deuba has wished for emancipation of the country people from all sorts of injustice and suppression and peace would prevail in the country by following the teachings of the Lord Buddha.

Deuba has said that the activities of violence, murder, abduction and anti-human rights activities should be stopped forever.

Saying the constitution has been successfully implemented after holding all tiers of elections per the constitution and the country has got an outlet from political transition, he said, "Economic prosperity and peace are the wish of the Nepali people after this historical achievement. Overall development of the country is not possible without sustainable peace."