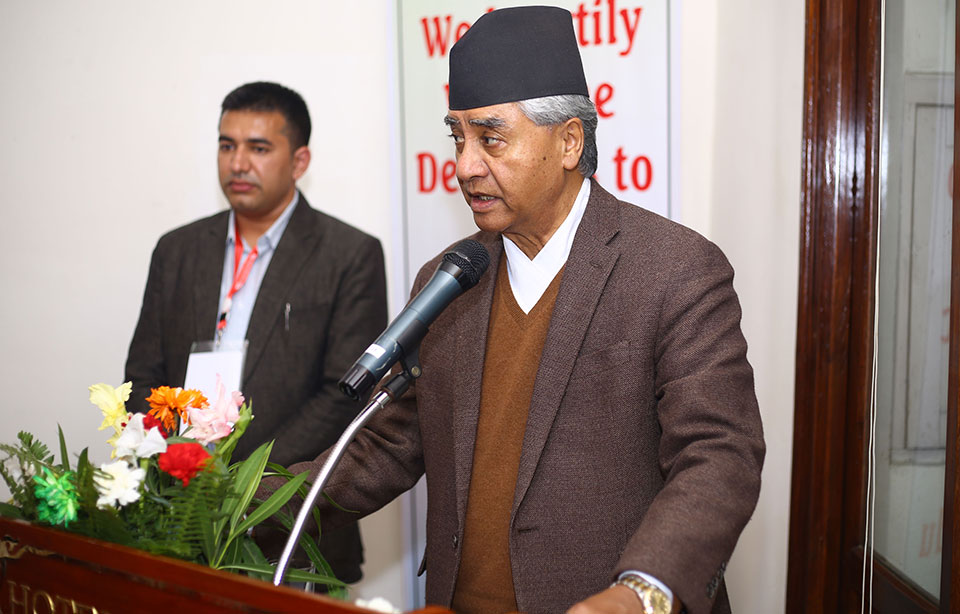 KATHMANDU, Nov 30: Nepali Congress (NC) President Sher Bahadur Deuba has claimed that NC was the only party in the country that adhered to democratic socialism.

Addressing a youth conference jointly organized here today by the International Union of Socialist Youth, Nepal Students Union and Nepal Tarun Dal here today, leader Deuba reiterated that NC is the party that has been striving for democracy since its establishment.

Stating that the conflict was resolved and the peace process had been led to a success during the leadership of NC, he also reminded that the Federal Republican Democratic constitution was also promulgated during the NC's leadership.

Also speaking at the programme, NC Vice-President Bimalendra Nidhi echoed with Deuba and asserted that the country had received constitution with the features as federalism, republicanism and full democracy during the NC's leadership.

He added that the three-tier elections were also held during the leadership of NC.

Likewise, NC General Secretary Dr. Sashank Koirala opined that the incumbent government had not been able to deliver as per the promises it pledged.

Stating that Nepal had robust potentiality of natural resources, he pointed out the need for one and all to forge ahead in unison for the greater good of the country in the wake of achieving political stability in the country.

Joint General Secretary Dr. Prakash Sharan Mahat accused that the incumbent government had only sold dreams to the people and was more into propaganda.

Present at the Conference that would go through three days were former President of Tarun Dal and former Minister of State for Finance Udaya Shumsher Rana, office-bearers of the Union of Socialist Youth, Nepal Students Union President Nain Singh Mahar, President of the Tarun Dal, Jit Jung Basnet among others.

They shed light on the role of the youths in establishing democracy across the globe.

Prime Minister's directive: Do not leave any stone unturned to vaccinate all citizens against COVID-19
37 minutes ago