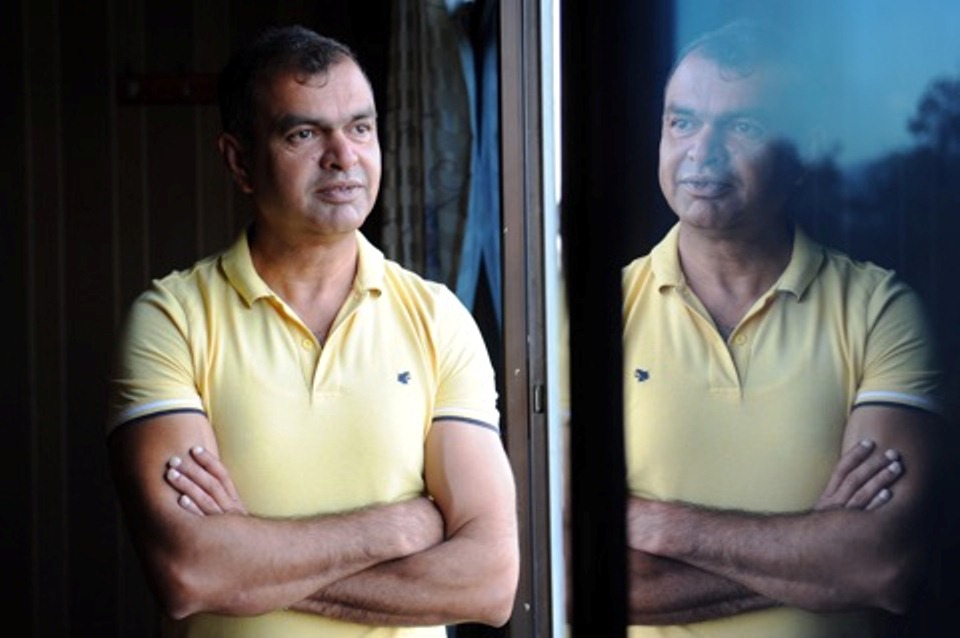 KATHMANDU, Nov 12: When she was undergoing first phase treatment at Kirtipur Hospital over a month ago following an acid attack, powerful messages of support from Bollywood big names like Amitabh Bachchan and Varun Dhawan kept 14-year-old Muskan Khatun going. There was also another person constantly on the phone to boost her spirits: Ujjwal Bikram Thapa. Thapa's life of compassion, kindness and selfless service is a story in itself .

During a five-hour interview at a rooftop restaurant in Kathmandu Sunday, Thapa, 51, received three phone calls. These were not from family or friends but from helpless total strangers who wanted his help in overcoming serious medical contingencies. Every morning, Thapa wakes up to many missed calls. The calls determine the way he spends his day: rushing to hospitals and accident sites, to CDO offices or some huts in the villages. His life has centered on other people's grief for some time now. And this busy man, who comes from an affluent family in the capital, has never stopped to ponder why life has turned out this way for him. Perhaps he has no need to, given the inner satisfaction and the sense of purpose .

Ujjwal was 10 when his father sent him off to Sherwood College in Nainital. (Bollywood mega star Amitabh Bachchan was also there, years earlier). Before that, he was at St Xavier's School in Lalitpur till the 5th grade. That did not prepare him for boarding school in India. It was the toughest test of his life. "I did not have sufficient command of English and Hindi. I was a timid little fellow far from home," he recalls. But he did grow stronger , and more ready for big challenges.

Though he did not sport a ponytail or wear earrings like his friends, he was into gang fights during college . "I would come home to Kathmandu during the holidays. Gang fights were common, and I was a member of the Kamalpokhari Boys," says Thapa. He ended up in police custody a few times. “Landing behind bars felt macho back then,” until his father gave him 'a serious lecture' the next day.

On his father's insistence, he studied electronic engineering at New Era University in the Philippines. After graduating, he tried his hand at different businesses. He made some money with a pashmina factory in Dang until it closed because of the Maoist insurgency . On and off in business, his father Mohan Bikram Thapa's contacts helped him substantially. His father was a great social worker and this DNA might have survived in the son. "I was my father's favorite and I think he did not trust me enough not to go off track easily. It could also be that he felt I would follow in his footsteps some day," he mused.

Thapa senior was the first forest conservation officer in the country. He was a government official of repute, but the philanthropic side of his life overshadowed everything else. Their home at Kamalpokhari had separate cottages for the poor who came from the Thapa's hometown in Sindhuli. They could come and stay for free. "He would tell us that it is only the fortunate who get to help others," Thapa fondly remembers his father telling him. His mother, Urmila, was equally big-hearted. Even today the 81-year-old does not feel put off when the poor come to them at Kamalpokhari seeking help.

Thapa's life changed forever in 2011, at Aryaghat, Pashupati. He had not thought much about his father's selfless work before he died. The father was a 'strict man', Ujjwal would keep distance from him. "At Aryaghat, hundreds came to the funeral. They were genuinely in grief," he said .

'What is the purpose of life?" he found himself wondering. Dozens of people came to share stories of his father's kindness, how he saved their lives or their children's lives, how he never failed them when in need . "Father helped many, most of them from Sindhuli, without any selfish motive. He earned their gratitude. And what could be greater than people shedding genuine tears when you die?"

When he was 14 and back home in Kathmandu during holidays, his father once gave him Rs 340 to pay their electricity bills. Along the way , he saw a woman weeping out aloud inside Bir Hospital . Her child had head injuries and she had no money for the treatment. So he gave her the 340 rupees and raised some more from passing strangers. Next day, when he told his father about this, father and son went back to Bir to meet the woman. "The gatekeeper recognized me and smiled. Inside, the woman was still there and she greeted me. Father now believed what I had told him, and I felt he liked what I had done."

Thapa has many such stories of random acts of kindness. But since the passing of his father, assuaging people's tears has been his sole concern. "Tears are tears. Mine, yours or someone else's, they're all the same." He has seen horrible pain, up close and personal. He is sad that he can only help so many.

A father of three daughters and married to an independent businesswoman, Thapa does not spend money helping others, unless that is a last resort . He does not earn anything either, except whatever he gets from some shares he bought in the past. "My personal expenses are next to nothing. I don't earn and I don't have the time to spend."

He is physically present to help those in need and use his contacts to raise funds and mobilise other kinds of support . Muskan Khatun, the acid attack victim from Birgunj, is just one of 2,000 cases he has dealt with in the last eight years. This is the first time he has sought media support, “because acid attack is the most horrendous thing that can happen to anyone." The case could also cause enough of an uproar to impact policies and the law itself, he feels.

Thapa has dealt with cases of accident injuries, cancer, kidney failure, eyesight problem, pregnancy complications and so on, and the priority has always been saving life. He has seen rich people cry helplessly for not being able to save their loved ones. Money can only go so far. But it does make a difference, especially in a country like ours, where the poor are many and hospitals few and far away.

According to Thapa, the medical contingencies he has encountered have involved from just a thousand rupees to millions. With few exceptions, he has relied on people trusting his 'madness' to fork out for the hospital bills . "My close friends say I am mad, and that is what they call me at home also! They have given up trying to engage me in family matters. They now just leave me out of such things," he says laughing. He has found his calling in life, and it is helping ease the sufferings of others.

KATHMANDU, Aug 4: As many as 15 staffers at the Naxal-based Commission for the Investigation of the Abuse of Authority... Read More...

KATHMANDU, Aug 4: One Nepali migrant worker has succumbed to COVID-19 in South Africa while 22 others have been diagnosed... Read More...

Above 95 pc arrears in energy and irrigation sectors settled: Energy Ministry
16 hours ago