Landslide along Munglin-Narayangadh road stretch cleared; no vehicular movement yet 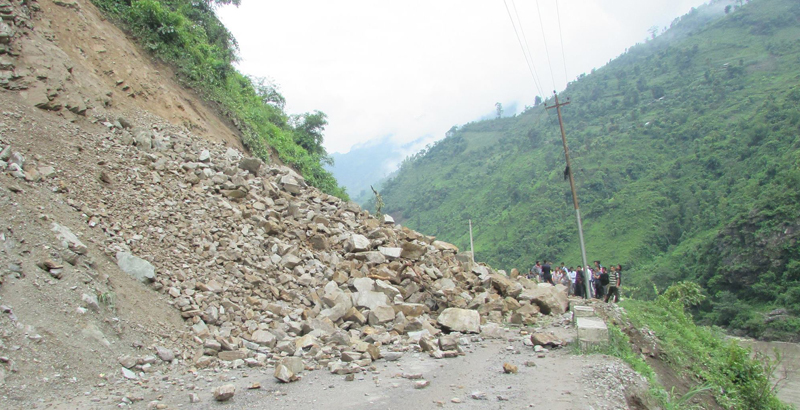 NARAYANGADH, April 3: The landslide, which killed two, at Ghumaune of Muglin-Narayangadh road stretch has been cleared now. However, the vehicular movement is prohibited on the road as the risk of landslide still looms large at the place.

One of the deceased has been identified as the assistant driver of the tanker, Na 4 Kha 5419, bound for Narayangadh, according to the Home Ministry. Two injured persons have been rushed to Bharatpur for treatment.

Earlier, DPM Bimalendra Nidhi instructed all the concerned security personnel to get involved in the rescue.

BAJHANG, JuLY 17: Landslide debris on the Jay Prithvi Highway has not been cleared even after ten days, obstructing vehicular movement... Read More...

SINDHULI, Feb 21: Transportation along the BP Highway has finally resumed from Tuesday morning after a diversion was created to ease... Read More...

TAPLEJUNG, Sept 12: The Paancthar – Taplejung road stretch along the Mechi highway has been obstructed after overnight torrential rainfall... Read More...