Once underdeveloped, Rolpa on the path to prosperity 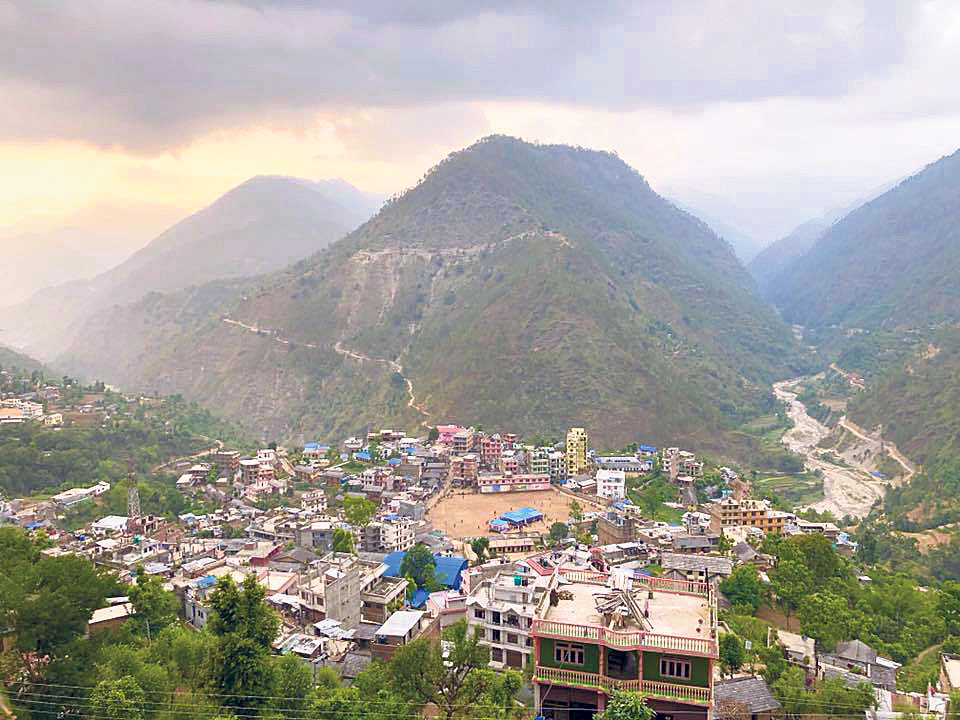 Libang, the district headquarters of Rolpa.

ROLPA, April 14: Until a decade ago, access to the road network was a dream for Rolpa residents. The district has one municipality and nine rural municipalities.

However, the situation has changed over the recent years as most wards of the district now have access to a road. Since their formation nearly two years ago, the local governments have prioritized constructing roads among other infrastructures in their locality.

This has played a pivotal role in connecting villages with the local and national road network.
Around 969 people were killed while 33 people disappeared of Rolpa during the ten-year-long armed conflict between the government and the then rebel Maoist. More than a decade after the war, hundreds of conflict victims and their family members are still awaiting justice here. After the deadly conflict, those supporting the government as well as the rebels, however, decided to let go of their grudges and live with peace and co-operation.

“Forgetting everything, we have moved on in our lives. Also because we have no alternative,” said Shree Kumar Roka, who lost her father during the insurgency period. Locals here have never thought that they will ever have access to telephone or internet, which is now available in all its municipality and rural municipalities.

These days’ local units have started delivering their services through the internet. Some of the local units are operating computers and the internet through the solar system. Small hydropower projects have lightened up some villages. With this, people living in every nooks and corner of the district now have the information regarding the happenings around the world.

“Small hydropower projects have eliminated darkness from our village. We can know about the whereabouts of our loved ones, no matter where they live as we all have mobile phones in our hands,” said Resham Sah of Thabang.

All the ten local units in the district have their own websites. To maintain transparency, they actively disseminate the information through various social media channels, says Gunendra Gharti, chairperson of Sunil Smriti Rural Municipality.

Residents of Sunchahari Rural Municipality can register the names for birth, death, migration, marriage and social security through the rural municipality’s online portal.

Locals of Rolpa breathed a sigh of relief after the establishment of banks in the rural parts. However, the district is yet to uplift the standard of education.

But the local government of late has prioritized education and has been conducting various programs to improve the standard of education imparted in their schools.

“In comparison to last year, the annual report of grade eight was satisfactory this year. Change is happening,” claimed Purna KC, the chairperson of Rolpa Municipality. Since its formation, Rolpa Municipality has been providing free technical education to 100 students each year.

Representatives have targeted to produce at least 500 skilled technical human resources within their five-year tenure.

Meanwhile, Sunil Smriti Rural Municipality has made it mandatory for parents to educate their children up to 12th grade. “If parents cannot afford to pay for the education of their children due to the poor financial condition, local unit is ready to take responsibility of such children, but they must study,” said Gunendra Gharti, chairperson of this rural municipality. He warned that those who will neglect this decision would be deprived of government services and allowances.

As the students were deprived of quality education, Gangadev Rural Municipality appointed teachers using its budget. “We don’t care if we are jailed for doing the right thing. It is our responsibility to provide quality education to our children,” said rural municipality’s chair, Bir Bahadur Khatri.

Agriculture and animal husbandry is the main occupation for the people in Rolpa. This is also because they have enough arable land and forest.

Local governments have in the recent months forwarded various programs to increase agricultural productivity and promote commercial farming.  To encourage the farmers, Parbartan Rural Municipality of Rolpa has launched a campaign to plant 6,000 saplings of lemon.

The local unit has established an agriculture produce collection center to make it easier for the locals to store and sell their agriculture produces in the market. Sunchahari has encouraged the farmers to increase the production of cardamom to develop Jelbang as a pocket area for cardamoms. With time, Rolpa is becoming self-reliant on meat products.

Earlier, villagers struggled with their illnesses for a lifetime while some faced premature death in lack of treatment. However, Rolpa Hospital currently has five MBBS doctors. Similarly, there are two doctors in the Primary Health Center, Holeri and one in Sulichaur. As the district hospital has started handling complicated delivery cases, women here have been relived. Despite lacking proper infrastructures, health institutions in Rolpa are delivering effective services.

However, the district still needs to work on infrastructure development. Most schools and health posts in the district are operating in dilapidated buildings. Lack of human resources is a common problem for all authorities. Despite conducting several awareness campaigns, child marriage is still widely prevalent in the district.

Minister Jhakri to resign from her post
21 hours ago

I do not have desire to cling onto power: Outgoing Minister Shrestha
10 minutes ago

Govt has not barred BFIs from accepting land as collateral: Minister Shrestha
17 minutes ago

NAC to revise its 10-year business plan
50 minutes ago