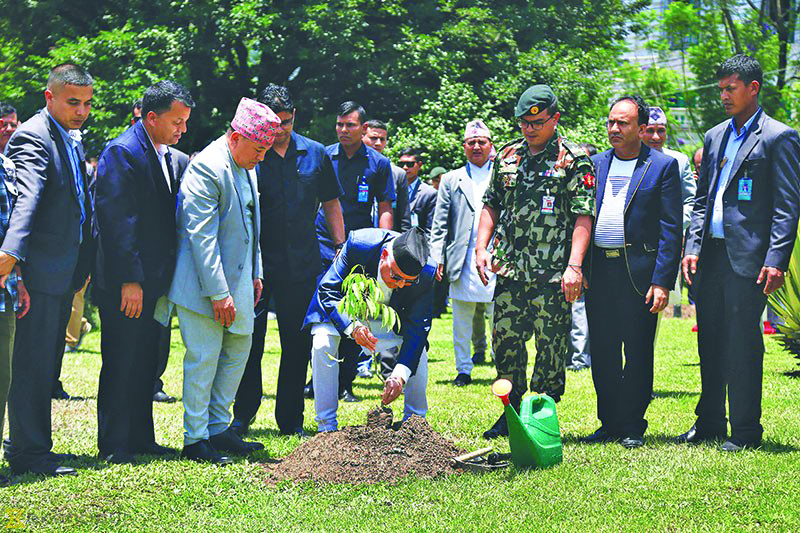 Fruit tree plantation is good and necessary initiative for Nepal but we cannot achieve it within a single year. We at least need three years

The ‘One Nepali, One Fruit Tree’ campaign launched by the government in 2018 was a good initiative to implement fruit year program effectively. Launched on June 5, 2018, this program encouraged all entrepreneurs and horticulturists particularly those working in fruit development. Prime Minister KP Sharma Oli had launched the campaign on the occasion of World Environment Day by planting saplings of litchi and avocado in Singha Durbar premises.  PM Oli aimed to make the country self-reliant in fruits through this initiative. He said: “Planting a fruit tree has many advantages. It provides nutritious food to the people; helps control soil erosion and also balances the ecosystem by improving environmental condition”. The Prime Minister stated that this initiative could contribute to economic and social transformation in line with its ‘Prosperous Nepal, Happy Nepali’ vision.

In a video message released on the World Environment Day of 2019, PM Oli said that every Nepali should initiate a campaign to plant fruit sapling. He urged everyone to plant at least one sapling that could generate income as well as provide nutrition to families. The PM also expressed his concern over the erratic climate change and environment pollution. Calling for action from all quarters to reduce the carbon footprint and pollution that is increasing at an alarming rate, Oli said that the government had adopted an environment-friendly policy and would employ technology to tackle the environmental concerns. This year, the PM planted a pear sapling at Koteshwor to mark one year of the campaign.

Similarly Nepal Army planted approximately 38,000 saplings of various types of fruits in the premises of its various barracks in Kathmandu, Kavrepalanchok, Mahottari and Chitwan districts as part of its “One Army Official, One Fruit Plant” campaign to plant 150,000 tree saplings across the country. The campaign started on June 28 from the Army headquarters by planting saplings of 250 fruit trees. The government has decided to celebrate “Plantation Day” annually on 14th of Asadh.

Such ambitious plantation program of different fruits is praised by everyone. However, experts are concerned about the massive number of trees the government wants to plant in a year and their survival. During 2018, as many as 2,316,739 fruit trees were planted but nobody knows how many of them survived. Another missing aspect about this campaign is making people aware about taking care of the plants. Plantation is easy but caring up the saplings is a big challenge.

The experts like this author are also concerned about many other issues. One of them is related to the source of fruit saplings. Where from did we get these fruit saplings? Are these saplings free from pests and diseases? Free movement of planting materials is one of the main sources of spread of diseases and pests in fruit crops. In most of the fruit producing countries, such free movement of planting materials is restricted through the enforcement of plant quarantine act.

In Nepal, it is the compulsory provision for importers to submit the Phytosanitary Certificate along with the Declaration Form for importing plant and plant products including fruit saplings at the entry point. Phytosanitary Certificate will be issued by all quarantine offices (National Plant Quarantine Program, Provincial Plant Quarantine Offices, and Plant Quarantine Check Posts). But there is no plant quarantine act and hence, fruit saplings are distributed freely within the country and such free movement of plants and fruits is one of the main factors responsible for spread of diseases and pests like citrus greening disease and fruit flies.

In other countries, the governments ensure supply of quality planting materials for fruit crops by enacting Fruit Plant Nursery (Regulation) Act and enforcing it through licensing of fruit nurseries. In Nepal, there is no fruit nursery act as of now. However, there is provision of nursery registration. Out of 470 fruit nurseries, 272 are registered and 198 are non-registered. Due to weak regulation, all these nurseries are selling fruit saplings without any inspection by the authorized agency.

Availability of quality planting material is a prerequisite to the success of horticulture development in general and fruit development in particular. Although the private fruit nurseries mentioned above are playing important role in multiplication of planting materials of fruit crops, many of them follow traditional methods, lack adequate infrastructures and sell plant materials of low quality. Of many other constraints, non-maintenance of healthy mother stock is worth mentioning. A strong monitoring mechanism is needed for addressing this issue.

Fruit tree plantation is good and necessary program for Nepal but it requires, at least, a three years’ program. The first two years are needed for production of quality saplings and the third year is for plantation. That is why, the FY 2016/17 was declared as the year of quality sapling production of fruits for celebrating “Fruit Year” in 2018 with an objective of making Nepal self-reliant in fruit. In this context, various other programs have also been started thereafter.  Some of the major activities initiated to observe the fruit year were nursery establishment and strengthening for quality sapling production, use of hi-tech in fruit production, rejuvenation of declined fruit orchards and value chain development of major fruits. But these programs have been disturbed or discontinued due to the recent restructuring.

Fruit tree plantation program is quite different from forest plantation. It needs careful handling and appropriate cultivation practices. Otherwise, the plantation program will be a failure. Such program should be implemented by an appropriated government organization. The appropriate organization for the implementation of this program is the National Fruit Development Center under the Department of Agriculture. This center needs to be strengthened in terms of manpower and regulatory authorities.

Two-thirds areas of Nepal are hilly and mountainous. The dominant features of farming in these areas are small landholdings, sloping marginal land, and rainfall-dependent farming. Under such conditions, fruit farming is the best option because it is not only environment-friendly but also profitable. Furthermore, fruits also contribute significantly to nutrition security. Although the agro climatic situations and geophysical locations of Nepal favor growing many types of fruit crops, there is huge gap between exported (24812.17 metric tons) and imported (2, 27, 00,266 metric tons) amounts of different fruits.

This signals that there is immense scope of fruit development in Nepal. But the government needs to put in place the prerequisites discussed above to capitalize on this scope.

Nepal’s primitiveness is starker in its villages, where public amenities such as drinking water supply, public sanitation, paved streets and... Read More...

What are the driving factors of violence against women and girls in Nepal? Why are we struggling to stop it?... Read More...