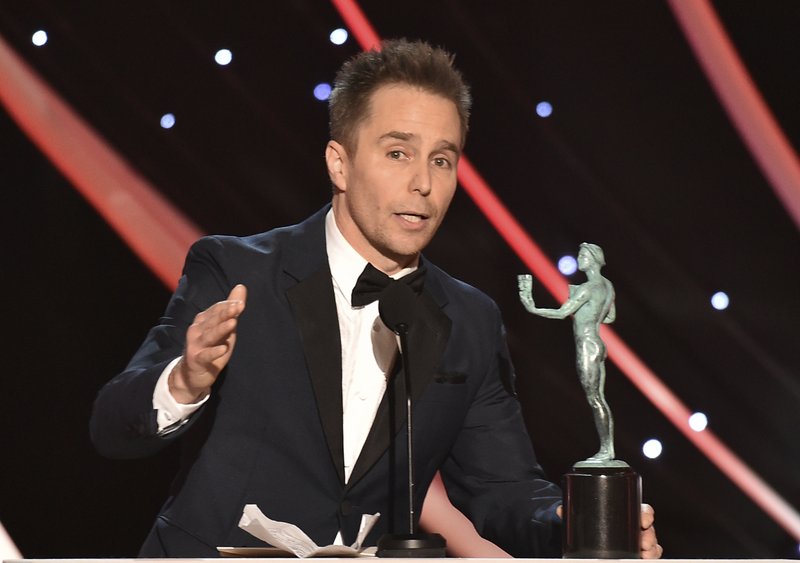 Sam Rockwell accepts the award for outstanding performance by a male actor in a supporting role for “Three Billboards Outside Ebbing, Missouri” at the 24th annual Screen Actors Guild Awards at the Shrine Auditorium & Expo Hall on Sunday, Jan. 21, 2018, in Los Angeles. (Photo by Vince Bucci/Invision/AP)

LOS ANGELES, Jan 22: The Screen Actors Guild Awards is tipping the scales for some Oscar hopefuls with a best actor win for Gary Oldman for his transformation into Winston Churchill for “Darkest Hour” and supporting actor wins for “I, Tonya’s” Allison Janney and Sam Rockwell for his role in “Three Billboards Outside Ebbing, Missouri.”

But it is the treatment of women in Hollywood and beyond that remains at the forefront of the show, which features a roster of almost all female presenters, and Kristen Bell as its inaugural host.

“We are living in a watershed moment,” Bell said in her opening monologue, which stayed light and mostly clear of politics. “Let’s make sure that we’re leading the charge with empathy and diligence. Because fear and anger never win the race.”

Oldman won the top actor prize over James Franco for “The Disaster Artist,” which marked the second time in the evening, after William H. Macy won out over Aziz Ansari, where a potentially awkward moment was avoided on live television when a man facing allegations of sexual misconduct did not win in his category.

Ansari was accused anonymously by a woman of aggressive sexual behavior in an account that has prompted some to question whether the encounter as described constitutes misconduct or a bad date. He accepted a Golden Globe two weeks ago while wearing a Time’s Up pin, as did Franco who was accused of misconduct days after winning best comedy actor at the Globes.

Rockwell, who beat out his co-star Woody Harrelson for the award, took his moment on stage to give a shout out his co-star Frances McDormand, who is nominated for her leading role in “Three Billboards,” which went into the evening with four nominations, including best ensemble.

“Frances, you’re a powerhouse,” Rockwell said. “I stand shoulder to shoulder with you and all the incredible women in this room who are trying to make things better. It’s long overdue.”

SAG-AFTRA President Gabrielle Carteris said, “This is not a moment in time. This is a movement.”

“We must create an environment in which harassment discrimination and abuse are no longer tolerated,” Carteris said.

HBO’s “Big Little Lies” picked up best actor in a miniseries wins for both Alexander Skarsgard and Nicole Kidman.

“I’m so grateful today that our careers can go beyond 40-years-old,” Kidman said in her acceptance speech. “We are potent and powerful and viable. I just beg that the industry stays behind us because our stories are finally being told.”

Producers say the female-forward approach was inspired by last year’s Women’s March, but the show arrives at a time when some of the industry’s biggest names are leading the Time’s Up and Me Too movements to address gender inequality, sexual misconduct, pay disparities and other issues.

Lifetime achievement award recipient Morgan Freeman kept his remarks quite brief after a moving highlight reel of his expansive career and an intro from Rita Moreno. The Oscar-winner for “Million Dollar Baby,” and four-time nominee, has over 80 films to his name.

“I’m gonna tell you what’s wrong with this statue,” he said as he wrapped up. “From the back it works, from the front it’s gender specific. Maybe I started something.”

The brisk show comes two weeks after a black-dress protest at the Golden Globe Awards, and several stars including Meryl Streep, Emma Stone and Michelle Williams bringing activists to the show. The SAG red carpet saw the return of colorful frocks and far fewer Time’s Up pins — although some actors, like Kumail Nanjiani and Gina Rodriguez, were still sporting theirs.

With many prominent men in Hollywood facing accusations of sexual misconduct, virtually every aspect of awards season has been impacted by the scandal.

As the red carpet kicked off Sunday, E! host Giuliana Rancic wasted no time getting to the heart of some of the elephants in the room, asking “Glow” actress Alison Brie about recent allegations of misconduct against her brother-in-law James Franco (Brie is married to actor Dave Franco.)

“I think that above all what we’ve always said is it remains vital that anyone who remains victimized should have the right to speak out and come forward,” Brie said, adding that in the case of Franco, “Not everything that has come forward is fully accurate.”

Franco has also called some of the accusations inaccurate, but after two days of facing questions about the claims on late-night television, “The Disaster Artist” star has kept a lower profile, although he was in attendance at the SAG Awards. He did not attend last week’s Critics’ Choice Awards, where he also won an acting honor.

The Globes were the first major awards show forced to confront the sexual misconduct scandal since it exploded in October with dozens of women accusing Harvey Weinstein of harassment and in some instances, rape. (Weinstein has denied all allegations of non-consensual sex.)

Weinstein accusers Marisa Tomei and Rosanna Arquette used some of their time presenting an award Sunday to name some of the “silence breakers” in the movement including Asia Argento, Annabella Sciorra, Ashley Judd, Daryl Hannah, Mira Sorvino, Anthony Rapp and Olivia Munn.

“So many powerful voices are no longer silenced by the fear of retaliation,” Arquette said. “We can control our own destiny.”

The SAG Awards are a reliable predictor of the winner for the best actor and actress Academy Awards; this year’s show comes two days before Oscar nominations are announced.

The SAG Awards have no best picture category, but rather ensemble awards that recognize a film or TV show’s entire cast. Besides “Three Billboards,” the nominees for outstanding cast in a motion picture are “The Big Sick,” ″Get Out,” ″Lady Bird” and “Mudbound.”

The day’s first awards went to “Game of Thrones” and “Wonder Woman,” which were honored for best stunt ensemble honors handed out on the red carpet.

The complete list of winners at Screen Actors Guild Awards