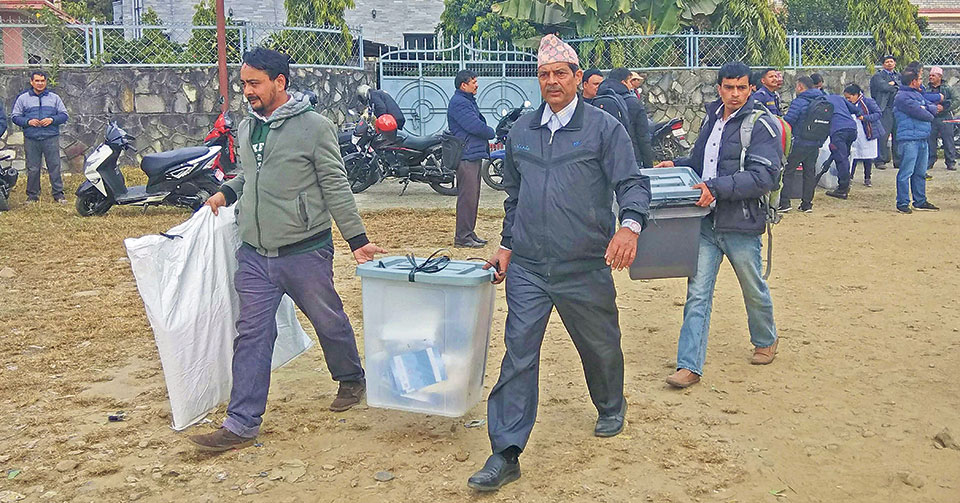 POKHARA, Dec 5: Carrying 66 types of election materials, returning officers and security personnel have headed for their destinations to hold the parliamentary and provincial elections slated for Thursday.

According to the District Election Office (DEO), Kaski, almost all the election officers have reached the election office by Monday evening. As per the details provided by the Western Regional Administration (WRA), security personnel have already been deployed at all polling stations of five districts of Province 4 taking part in Thursdays' elections. Those returning officers who have been deployed at the polling stations which are topographically challenging and far had to leave early on Monday.

"As of now, security has been the major challenge. So, we have paid special attention to that," said Laxman Acharya, chief officer of WRA. According to him, the polling stations of most of the districts taking part in the second phase of elections are comparatively accessible. Most of the districts are connected to roads which have proven to be a boon for the officers. "Everything is ready, now what is left is the voting," The security of voters, election officers, workers, election materials and ballot boxes will be a major concern, he stated.

As many as 105,900 eligible voters will be taking part in Thursday's election in Province 4.  "As instructed by the Election Commission (EC), we were to reach the polling stations by Monday evening. So, we were in a rush to meet the deadline the whole day," said Rajesh Regmi, an election officer deployed at Chauthe of Pokhara. Officers are carrying 66 types of election materials including thread, matchbox, candle, pin, marker, ink, stapler among others.

As informed by Election Officer Ganga Lal Subedi, 2,433 returning officers have been deployed in Kaski alone. At least seven security personnel will be deployed at each polling center.

KATHMANDU, Dec 3: With the completion of all logistical and administrative preparations, poll officers are heading toward their assigned election constituencies... Read More...

Returning officers heading toward polling stations in Khotang (with video)

KHOTNAG, Nov 22: With federal parliamentary and provincial elections less than a week away returning officers are heading toward polling stations... Read More...

Govt, ASDP and NACCFL sign deal for capacity buildings of cooperatives in Karnali
49 minutes ago