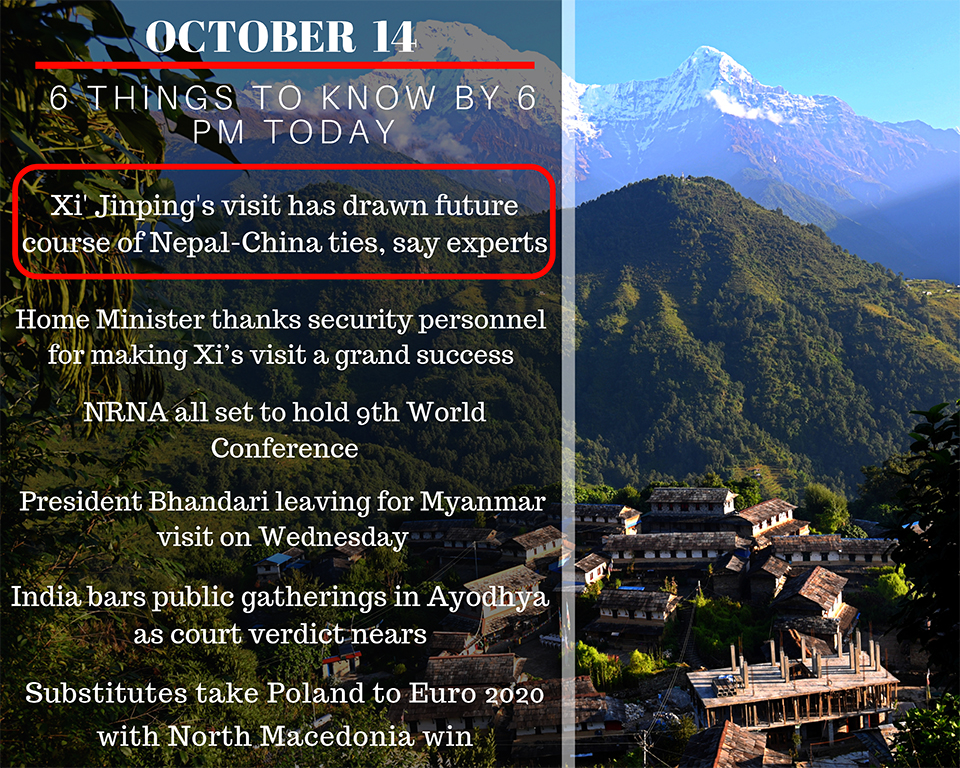 Wrapping up a two-day state visit to Nepal, Chinese President Xi Jinping returned home on Sunday. Xi's visit has been taken as a watershed moment in the age-old friendly ties. Republica Online talked to two Nepali foreign affairs experts regarding the outcomes of the visit.

At a meeting with security personnel at Home Ministry on Monday, Minister Thapa said that security work plan for Xi’s visit proved effective and it sent a message to the world that Nepal’s security mechanism is reliable and capable enough to handle such high-profile visits.

Non-Resident Nepalis Association (NRNA) has informed that preparations for its 9th World Conference to be held in Kathmandu have been completed.

Organizing a press meet in the capital on Monday, the organization informed that about 2500 representatives from 51 countries will attend the conference which is scheduled to be held between October 15 and 17 with a motto of “Me, My NRNA and My Nepal.”

President Bidya Devi Bhandari is paying a state visit to the Republic of the Union of Myanmar from October 16 to 20 at the friendly invitation of the President of Myanmar U Win Myint, the Ministry of Foreign Affairs said.

During the visit, President Bhandari will hold bilateral talks with her counterpart.

Daw Aung San Suu Kyi, State Counsellor of Myanmar, will call on Bhandari. President of Myanmar is scheduled to host a state banquet in honor of the Nepali delegation led by Bhandari.

India has barred public gatherings in the town of Ayodhya as the Supreme Court started hearing final arguments on Monday to decide whether a Hindu temple should be built on the ruins of a mosque in a long-running dispute.

The razing of the 16th century Babri mosque by Hindu mobs in 1992 led to one officially secular India’s deadliest bouts of communal riots, in which at least 2,000 people, most of them Muslim, were killed across the country.

Poland left it late before goals from substitutes Przemyslaw Frankowski and Arkadiusz Milik, both set up by Robert Lewandowski, gave them a 2-0 win over North Macedonia which guaranteed their place at Euro 2020 on Sunday.

The Poles, who hit the woodwork twice before scoring, made sure of their place from Group G with two matches to spare as they became the fourth team to qualify after Italy, Russia and Belgium.

BIRATNAGAR, April 25: The government has claimed that it has been able to improve safety and security than the incumbent... Read More...