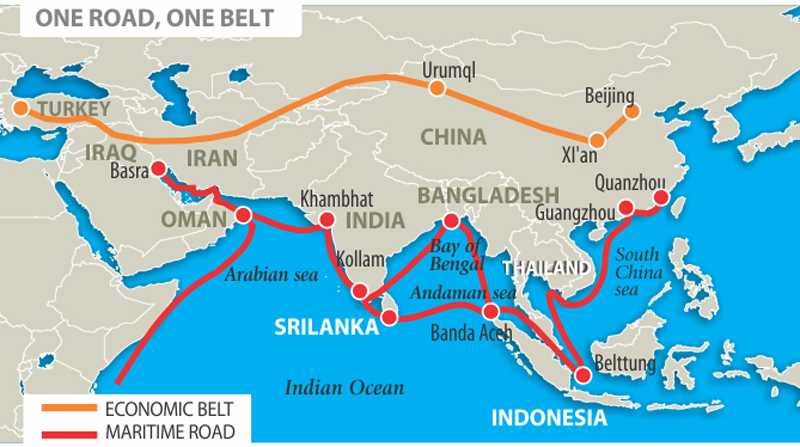 China-Nepal-India transport link may produce many pleasant surprises including minimization of geopolitical skepticism
In the past centuries, Asia lagged behind in socio-economic development. Today, it is often claimed that the center of gravity of global economy is shifting to Asia. This cannot be considered an exaggerated claim. Asia is home to over half of the global population. In 1750, China’s share in global manufacturing was 33 percent and India’s share was 25 percent. Historically, therefore, these two Asian giants had dominated global economy.

However, industrialization in the West and colonization of Asia reduced Asia’s manufacturing share. By 1913, the share of China in global manufacturing was reduced to 3.2 percent and that of India lowered to 1.4 percent. But as a result of concerted efforts made by the People’s Republic of China for reform and growth, by 2013, China was well on its way to regaining its past position as its share in global manufacturing reached 24 percent. India is also catching up. These trends clearly show that Asia is restoring its lost glory and China is leading the way.

After the Second World War, all developing countries made efforts towards their socio-economic transformation. Development economics as an academic subject was then at an infant stage. There was no standard model that was universally applicable. Politicians, planners and experts experimented with different models. In fact, every country had to devise a model that would suit its local context. In this endeavor, East Asian countries, such as Japan and Republic of Korea were successful in their respective models. ASEAN countries also achieved some success. Of late, China has recorded very successful growth and transformation, lifting hundreds of millions of people out of poverty in the process. The momentum for growth and development continues.

Despite the fact that East Asian countries have tailored their development polices and approaches to their respective contexts, there are some common denominators in their model. International trade and transport connectivity made possible by aggressive expansion of physical infrastructure are the propellers of growth shared by those countries.

Today, as the center of gravity of the global economy is shifting to Asia, we need to think globally, beyond our past success. For Asia to lead, global connectivity revolving around Asia is the need of the hour. In such a context, the One-Belt-One-Road (OBOR) initiative of China significantly improves connectivity among Asian countries. OBOR along with Maritime Silk Road also augments connectivity between Asia and the rest of the world.

These endeavors will bring huge benefits to every country in Asia and would eventually become Asia’s pride. Through these transport links, Asian countries would be able to share the spillover benefits of spectacular innovation, productivity and growth in China.

Considerations regarding trans-Himalayan connectivity have always been shadowed by the physical barrier of the Himalayas. Yet, history has taught us otherwise. Since the ancient times, there have been trade routes, including branches of the Silk Road across the Himalayas to connect China and India through Nepal. Today, there would be no greater force than the synergy of economic and physical connectivity between the rising economies of China and India. And I am proud to have initiated a debate on Nepal being a dynamic bridge between India and China during my tenure as the prime minister of Nepal. To meet this goal, geographical barrier of the Himalayas should not be considered an obstruction. Modern infrastructure engineering has demonstrated that we can overcome such impediments.

China has proven this. The Qinghai-Tibet Railway has already exhibited how modern railway technology makes accessibility possible to places otherwise considered inaccessible. There are ample grounds to affirm that railway and highway connection between Tibet Autonomous Region of China and Nepal (and possible extension to India) is both technically and economically feasible. Therefore, while discussing China-Nepal-India economic corridor, we need to overcome the common perception regarding geographical barrier and instead must discuss it in the context of significant advancements made in transport engineering and supply chain logistics. Of course, environmental and ecological concerns should also be aptly addressed.

The transport connectivity between Nepal and China across the Himalayas is not simply about reducing the current transit cost or promoting trade. Rather, it is more about inducing significant changes in the structure of the economy on both the sides of the Himalayas. As China is now focused on the development of South-Western region, cross-border connectivity with modern transport and communication infrastructure provides an opportunity for Nepal to get an access to the global value chain. Transport and communication, in fact, bring the places closer and can create a wider market area, which make it possible to reap the benefits of scale and agglomeration economies.

Connecting China-Nepal-India may result in a huge market with an unprecedented level of agglomeration economies, productivity, innovation, tourism, and cultural exchanges.

Transport connectivity projects including both roads and railways under the broad framework of the OBOR, therefore, provides critical opportunity for the development of China-Nepal-India economic corridor. Besides, this initiative would significantly contribute to developing technical capacity for infrastructure building both in Nepal and India. In the past two decades, China has made unprecedented progress in infrastructure technology; it is now a global leader in High-Speed Rail (HSR) technology and other engineering fronts. Before China embarked on HSR, only a handful of countries had monopoly over the technology. Consequently, it was costly and beyond the reach of developing countries.

After China made innovations and expanded her HSR network rapidly (to now 19,000 km), the market for HSR became competitive and the cost was reduced by around 40 percent, thereby making it possible for many developing countries to plan for HSR.

China is now perhaps in a unique situation of huge capital and capacity surplus for infrastructure building. Some developing countries have already reaped the benefits from this through a win-win partnership with China. Since Nepal and other South Asian countries are facing infrastructure bottlenecks, it would be a wise approach to utilize China’s capital and expertise to rapidly develop infrastructure and accelerate economic growth.

Despite significant technological progress in transport engineering and logistics, there is some degree of skepticism on the feasibility or competitiveness of Nepal-China proposed transit route. The primary source of such skepticism is so-called geopolitical sensitivity rather than technical or economic consideration. It is said ‘physical development changes social thinking and perception’. So connecting China-Nepal-India with modern transport infrastructure may produce many pleasant surprises including, hopefully, minimization of geopolitical skepticism.

In the 21st century, the challenges that most Asian economies face are poverty and unemployment among the youth. Not only will the One-Belt-One-Road initiative enhance global connectivity, it will also transform the world today to a more prosperous and peaceful tomorrow. The efforts that China has put in for the future of Asia are highly appreciable. It should not be a choice, but a mandate for Asian countries to build on this effort. Only with the common pursuit of shared prosperity will Asia be able to lead the world again. Let us make a common pledge for it.

This is an edited version of the former prime minister’s speech delivered in Guangzhou, China on October 28