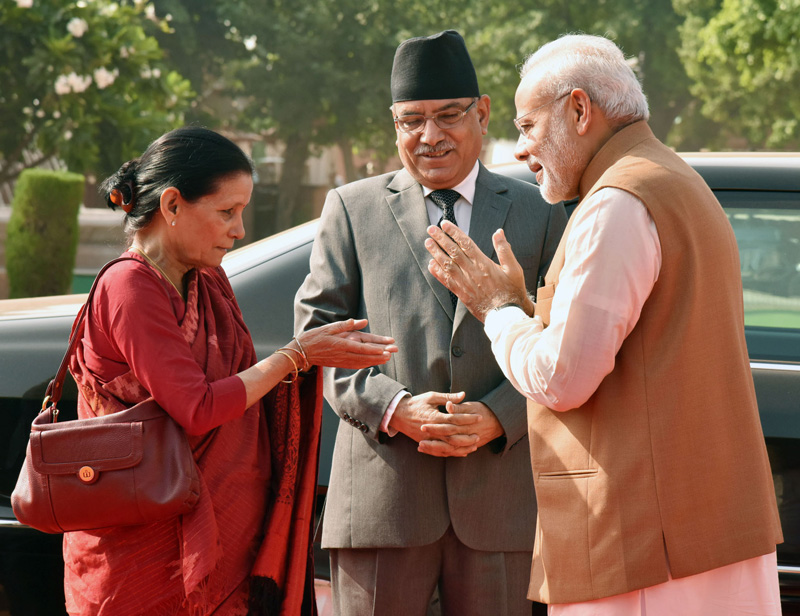 Prime Minister Pushpa Kamal Dahal is visiting China now because he wants to avoid the OBOR Summit being held in Beijing in May
When Chang Wanquan, China’s Minister of Defense, comes to Kathmandu next week to garner support for President Xi Jinping’s signature One-Belt-One-Road (OBOR) initiative, he is likely to return home empty-handed. The government of Pushpa Kamal Dahal is in no mood to sign up to OBOR, not yet.

Prime Minister Dahal will still visit China, right after the end of Chang Wanquan’s Nepal trip, for he wants to avoid the OBOR Summit being held in Beijing in May. If Dahal is in Beijing specifically for the OBOR summit, it will be hard for him to reject Chinese request for his signature on the OBOR dotted line. But if he goes now, purportedly to attend the annual Boao conference in China’s Hainan province, with so many other heads of state present at the time in China, Dahal reckons he will be under less pressure to agree to the OBOR proposal.

By going to China now he will also be able to deflect the criticism of his government which stands accused of tilting a little too much towards India, an unpopular position after the 2015 border blockade. Moreover, while Dahal is in China, he hopes to make progress on trade and transport agreements KP Oli had signed with China and thereby steal a little of Oli’s nationalist thunder. If he can convince President Xi to come visit Nepal, even better.
It is no secret that Dahal, who replaced Oli as prime minister, came to power partly with India’s support. India was unhappy with Oli, who was showing no inclination to amend the constitution to the liking of Madheshi forces.

More than that, it was his professed desire to ‘balance’ India by inching closer to China which turned Oli, once India’s point-man in Kathmandu, into its bête noir in Nepal.

By contrast, Dahal is today seen as more attuned to Indian interests. One of the promises he made to Indians when he became prime minister for the second time in August 2016 was that he would not try to get too close to the Chinese. This is why Dahal as prime minister has already visited India twice but China not even once. This is why his foreign minister has gone to New Delhi five times but refused to fly to Beijing. Again, the understanding is that if a high-level Nepali delegation goes on a bilateral visit to China, it will be expected to sign up for the belt and road initiative.

Indian Accent
Foreign Minister Prakash Sharan Mahat has repeatedly urged the Chinese, who are apparently putting pressure on Nepali government to enlist in OBOR, to understand Nepal’s geopolitical complexities. Mahat was giving voice to Indian concerns over the initiative. Crucially, Sher Bahadur Deuba, Mahat’s party boss, and the prime minister-in-waiting, is even more sensitive to Indian pressure tactics than Dahal.

In return, India will continue to support the Maoist-Congress coalition government; whether Dahal or Deuba heads it is really immaterial. In India’s reckoning, it would be hard to find a more pro-India coalition in Kathmandu.

Dahal may thus lack parliamentary votes for second amendment of the constitution, the one and only rationale for the existence of his government, but New Delhi would nonetheless like to see the continuity of this coalition. It was also under India’s pressure that the Madheshi parties, which were initially for immediately withdrawing their support to the government after the Saptari killings, decided to give Dahal some more time.

But why is India opposed to Nepal joining OBOR? India has in recent times been vocal about its opposition to OBOR after China signed a bilateral agreement with Pakistan whereby a trade corridor between the two countries, being developed as a part of OBOR, passes through Pakistan-occupied Kashmir, which India considers its territory. India thinks China should have consulted it before making such a sensitive deal. This makes Modi and co suspicious of the Chinese intent. And this is why India wants countries like Nepal and Sri Lanka to withhold their support for the initiative.

But if Nepal does sign up, what will it gain besides India's obvious ire? First, it is important to understand that the exact objective of OBOR is still obscure: it seems to be everything to everyone. (In fact, the only thing that is clear about the initiative is its focus on infrastructure development.) In countries like Pakistan and Kazakhstan, China has simply put existing bilateral projects under the belt-and-road framework. So OBOR, in this reading, is no more than old Maoist wine in new nationalist bottle, something useful for President Xi Jinping to consolidate his power in China.

Willing but unwilling
Yet it is not hard to surmise China’s desperate need for something like OBOR. In one way, it is China’s response to the perceived American attempts to encircle it with the help of other powerful democracies like India and Japan.

By getting countries in Asia and Europe to sign up, China wants to break this encirclement and even challenge American primacy in Asia. In response to China’s charm offensive, around 100 countries, including Nepal, have expressed their willingness to join OBOR, while 40, including Pakistan and Bangladesh, have already signed up.

It appears that China’s foreign policy will be increasingly conducted under the belt-and-road framework and as such most of its foreign investments will be channeled through it. So Nepal will have no option but to join in order to benefit from China’s massive investment—US $200 billion and counting—in the OBOR ventures.

Even if Nepal agrees to work within the OBOR framework, since the concept is itself rather ambiguous, there will be no legal obligation on Nepal vis-à-vis China. I have in the past argued that closer Nepal-China ties will also be in India’s interest, for India will then see that there is little to its neuralgia over China usurping its space in Nepal, which is impossible given the extensive Nepal-India ties.

India could then be more open to mutually-beneficial ideas like Nepal-India-China trilateral partnership.

Not so fast. For closer Nepal-China ties are apparently not in the immediate interest of either Dahal or Deuba. As (tangible) personal interests override (less tangible) national interests, expect Kathmandu’s tilt towards New Delhi to get more and more pronounced.

BEIJING, May 12: Chinese foreign policy experts have said that Nepal's decision to be part of China's ambitious One Belt One... Read More...