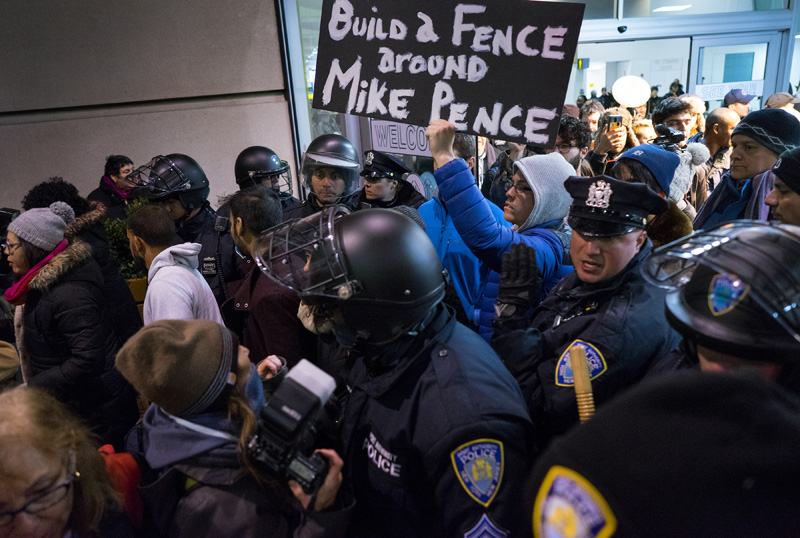 NEW YORK, Jan 29:  New York City's Kennedy airport became a scene of anguish and desperation Saturday for the families of people detained after arriving in the U.S. from nations subject to President Donald Trump's travel ban.

Many flights to the U.S. already were in the air Friday when the president's order barred entry to citizens of seven predominantly Muslim nations. A federal judge in New York Saturday night issued an emergency order temporarily barring the U.S. from deporting people who arrived with valid visas or an approved refugee application. But Trump's immigration ban caused chaos earlier in the day.

Lawyers and advocates working at the airport said they didn't have a hard count on the number of people taken into custody after getting off their flights.

Yosre Ghaled, 25, was among about a dozen distraught people waiting at an airport terminal Saturday to see if loved ones would be released, or put back on an outgoing plane.

Her mother-in-law's sister, a 67-year-old Yemeni citizen coming to live with family in the U.S. because she is sick from heart problems and diabetes, was detained after getting off a plane from Saudi Arabia.

"We're very sad. She lives a very bad life. We try in her last days to (give her) a good life," Ghaled said, adding that the family had been told that she would be refused entry and put on a jet back to Saudi Arabia. "We've waited for this many years, (for) her to come. They should just let us see her. Seeing her would make you feel a little better."

Similar scenes of despair and fear played out at airports across the country, where protests ranging from a few dozen people to thousands of demonstrators also took place.

Relatives said two families were denied entry to the United States upon arrival at Philadelphia International Airport on Saturday and returned to Qatar.

"They were told their paperwork is not valid," Sarah Assali, 25, of Allentown, Pennsylvania, told The Philadelphia Inquirer. She said six of her relatives, Christians from Damascus, had arrived after an 18-hour flight from Doha, Qatar.

At Los Angeles International Airport, lawyer Talia Inlender said an Iranian woman was detained after arriving on a flight from Amsterdam with her 1-year-old American son. Inlender said she had been approved to become an American citizen and was scheduled to take her naturalization oath in February.

Trump said the goal of the temporary travel restriction was to keep out potential terrorists.

Two members of Congress, New York Democrats Jerrold Nadler and Nydia Velazquez, joined several hundred protesters who spent part of the day at Kennedy airport trying to win the release of about a dozen people they said had been detained.

People in the crowd chanted "Let them in." Celebrities including "Sex and the City" actress Cynthia Nixon joined the demonstration.

The detainees in New York included two Iraqis who had previously been given permission to come to the U.S. because of their ties to the U.S. military.

One of them, Hameed Khalid Darweesh, who had worked as an interpreter for the U.S. Army after it invaded Iraq in 2003, emerged from custody to cheers from the crowd in the mid-afternoon.

He pronounced the U.S. "the land of freedom" home to "the greatest people in the world" upon his release, but also expressed dismay about having been initially held.

Still being held at the airport in the late afternoon was Haider Sameer Abdulkhaleq Alshawi, 33, an Iraqi who had been trying to reunite with his wife in Texas. She had come to the U.S. because she feared for her life after having worked for a U.S. security contractor.

Lawyers sat on the floor of an airport terminal Saturday evening working up court petitions on their laptops on behalf of detainees.

New York Gov. Andrew Cuomo, a Democrat, said he had directed state lawyers and the agency that controls Kennedy to "explore all legal options" to assist anyone detained at New York airports.

"I never thought I'd see the day when refugees, who have fled war-torn countries in search of a better life, would be turned away at our doorstep," Cuomo said. "This is not who we are, and not who we should be."

Celebrate Dashain from where you are: PM
16 hours ago