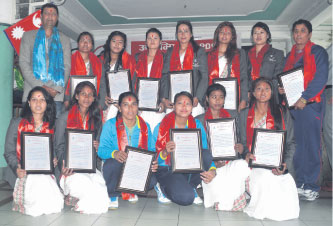 National volleyball players get awarded during a program organized to mark the beginning of Olympic Day in Teku, Kathmandu on Friday-Pratik Rayamajhi-Republica

Organizing a function in Kathmandu, the association felicitated volleyball team players, coach and manager with the cash prize on the Olympics Day.

KATHMANDU, Jan 24: Nepali national women's volleyball team is leaving for Maldives on Wednesday to compete in the qualifiers of Asian... Read More...