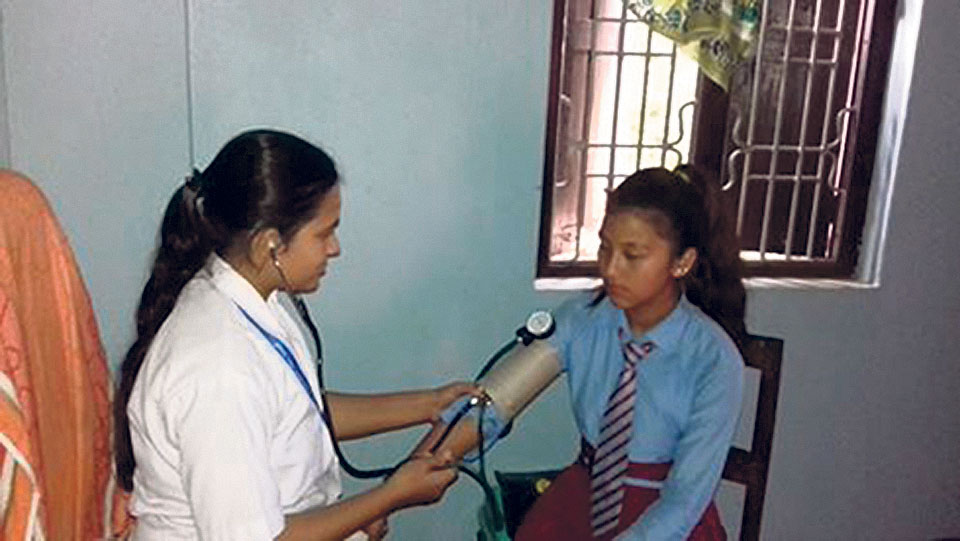 A nurse checks blood pressure of a student in Sindhuli in this file photo. Photo: Anil Bhandari/Republica

SINDHULI, Dec 8: Despite the government's announcement of the ambitious 'One School, One Nurse' program, the campaign has not been successful in the rural areas of the nation.

Nurses don't want to work in schools of rural areas the country, locals complained. The campaign was launched in all nine local units of Sindhuli in the current fiscal year.

According to Education Development and Coordination Unit, Sindhuli, the campaign was launched only at Jana Jyoti Secondary School in the last fiscal year. The project has been launched in all the local units of the district in the current fiscal year.

In the first phase, the ministry had appointed a total of 19 nurses in 19 government schools. The program was launched to provide emergency medical services to students and to counsel female students on reproductive health and sex education.

According to Sandhya Dhakal, nurse at Jana Jyoti Secondary School, the health condition of students are checked every three months. “The female students in the school come with menstrual problems,” she added.

PALPA, Aug 3: The school enrollment campaign launched in Palpa has been successful in bringing dropouts back to schools. ... Read More...