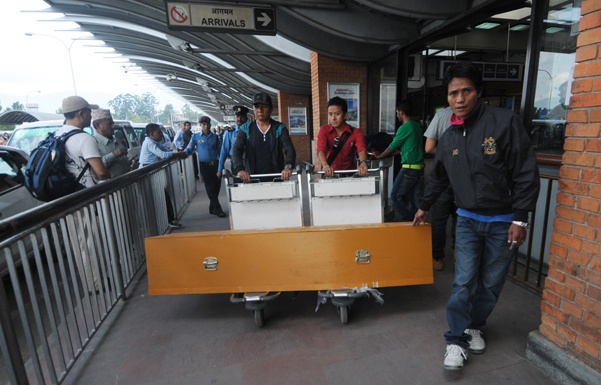 KATHMANDU, Sept 20: The number of deaths among Nepalis migrant workers abroad has been increasing every year. The government has not been able to reduce the death rate despite its efforts.

According to the board, the number of deaths in the last fiscal year 2078/79 is 249 more than the previous year. It seems that the highest number of Nepali workers died in Malaysia during foreign employment. Dhakal said that 2,153 Nepali workers have died in Malaysia in the last six years. Road accidents, suicides, industrial accidents, mutual quarrels and other reasons are the main reasons behind the deaths of Nepali nationals abroad.

Apart from the deaths of Nepalis, who went abroad for work, the number of people who came to Nepal with amputations is also not low. Last year alone, the number of amputees reached 274. The government has been sending Nepalese youths for foreign employment after physical examination, but the number of deaths has not decreased. Youth have no option but to go abroad since they do not get employment opportunities in their own country. In the first month of the current fiscal year alone, around 65,000 youths have gone abroad in search of work. This includes the data of new re-employment as well.

Nepali youths are going to different Gulf countries and Malaysia for work. Although the climate is extremely hot and humid, most of the Nepalese workers have to work at risk in these countries. The climate of Malaysia is similar to Nepal, but the number of deaths is much higher in Malaysia as compared to other labor destinations.

The government has made arrangements to provide various facilities to the victims' families due to the increase in the number of deaths during foreign employment. At present, if any worker dies abroad, his family gets Rs 2.2 million as sickness and other benefits. Out of this, 1.5 million rupees is provided for workers' insurance, while the state provides 0.7 million rupees for other benefits.

The government has also tried to reduce the death rate of Nepali youths who go abroad for work. The Board has made arrangements such as providing information about foreign countries and prohibiting those planning to go abroad without taking job training. Due to the lack of skills, Nepali people are cheated abroad, do not get proper wages and ultimately commit suicide.

Officials said the government is trying to make arrangements to send them abroad only after teaching them skills in order to avoid these problems. The government is also collaborating with private sector hospitals and medical colleges for the treatment of Nepali who are in coma abroad, according to Dhakal.

One dies in quarantine in Doti

DOTI, June 7: A 19-year-old man who had been staying at a quarantine facility here in the district died on... Read More...

KATHMANDU, July 16: The number of people killed in floods and landslides since Thursday reached 79 on Monday. Dozens are... Read More...