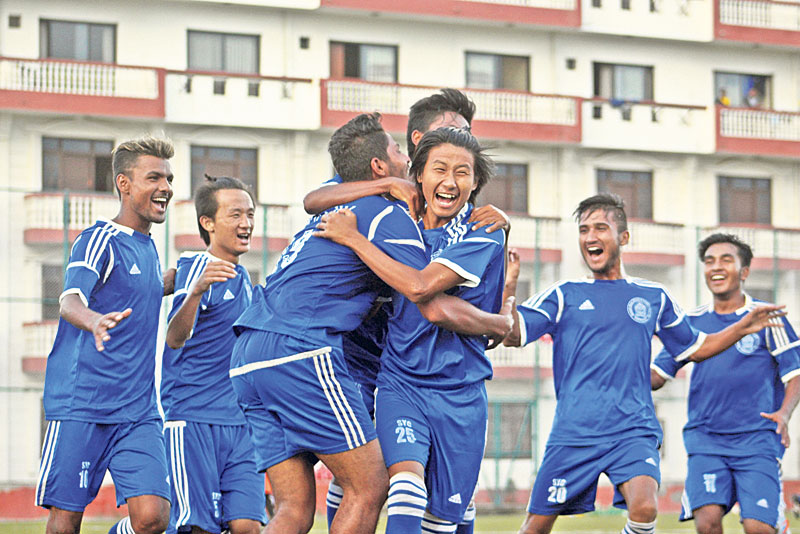 Players of Samajik Youth Club celebrate their winning goal during a Martyrs Memorial B Division League football tournament match between Samajik Youth Club and Mahabir Club at the ANFA ground in Satdobato on Thursday.(Photo Courtesy: Anfa)

KATHMANDU, Sept 8: Leader New Road Team (NRT) was held to a draw for the second time in the Martyrs Memorial B Division League football tournament while Samajik Youth Club opened account in the points table with a victory over Mahabir Club on Thursday in the capital.

Samajik edged past Mahabir 2-1 in the only match played at the artificial turf of ANFA Complex in Satdobato. Despite trailing by a goal as early as in the fourth minute, Yuman Choche hit back the equalizer one minute before break beating an offside trap. Diwakar Chaudhary scored the winner for Samajik in the 78th minute when he headed home a corner to stun Mahabir. Earlier, Saroj Thapa had given lead to Mahabir in the fourth minute.

In the first match of the day played at the APF ground, Halchowk, NRT and Chyasal shared points after playing a goalless draw. The result separates leader NRT and Chyasal by one points after five matches each. With three wins and two draws, NRT has 11 points while Chyasal moved one spot up to second with 10 points.

In the second match played at the same venue, a solitary goal from Suraj Raut in the 16th minute turned to be decisive in Khumalatar Youth Club’s 1-0 win over Tushal Youth Club. Khumaltar is level on fifth position with seven points along with five other teams including Tushal.

Govt awards construction contract of flyover in Gwarko, Lalitpur
9 hours ago
Residents can install EVs charging units for their personal use: NEA
21 hours ago

Users of broadband internet on the rise in Nepal
22 hours ago
99 Nepali workers set out for Israel; labor minister, ambassador reach TIA to see them off
5 hours ago