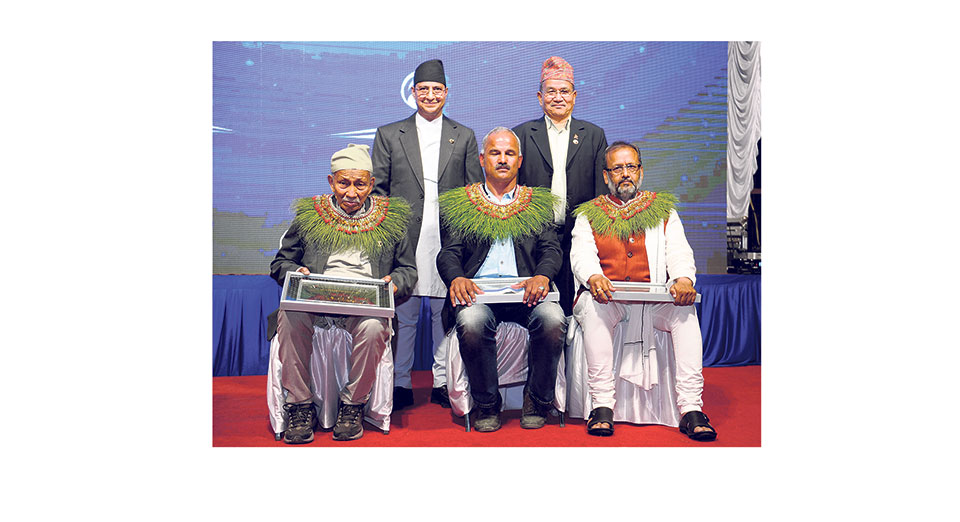 Amid a special function at Patan Durbar Square to mark the 10th anniversary of NRM on Wednesday, Mayor of Lalitpur Metropolitan City Chiribabu Maharjan and NRM Managing Director Binod Raj Gyawali felicitated the three outstanding individuals with a cash prize of Rs 100,000 and a certificate each.

Three-time Madan Puraskar laureate Joshi was honored for his contribution in the promotion of Nepali culture and art. Likewise, Gautam was honored for providing free and quality education to underprivileged children from across the country and businessman turned social worker Shinghaniya for transforming an ignored crematorium into a beautiful park.

At the function, Joshi shared the experience of his relentless efforts in studying the Nepali art and culture and ways to preserve them.

Making an announcement to honor Joshi during his 100th birthday by the metropolitan city, Mayor Maharjan said icons like Joshi should be felicitated during their lifetime instead of respecting social contributors after their death.

Sharing his story of educating underprivileged children in his model school in Helambu of Sindhupalchowk district, Gautam said that he plans to provide free education up to class 12 in the near future.

Long-time social worker Singhaniya also shared his success story of converting the crematory which resembled a dumping site in Janakpur into a beautiful park in his individual initiation.

Speaking during the function, NRM Director Shova Gyawali said Nagatik Nayak award is an answer to those who think that media only exposes corrupt people.

Our heads bow in obeisance when we remember culture expert Satya Mohan Joshi. Even as a centenarian , he is... Read More...