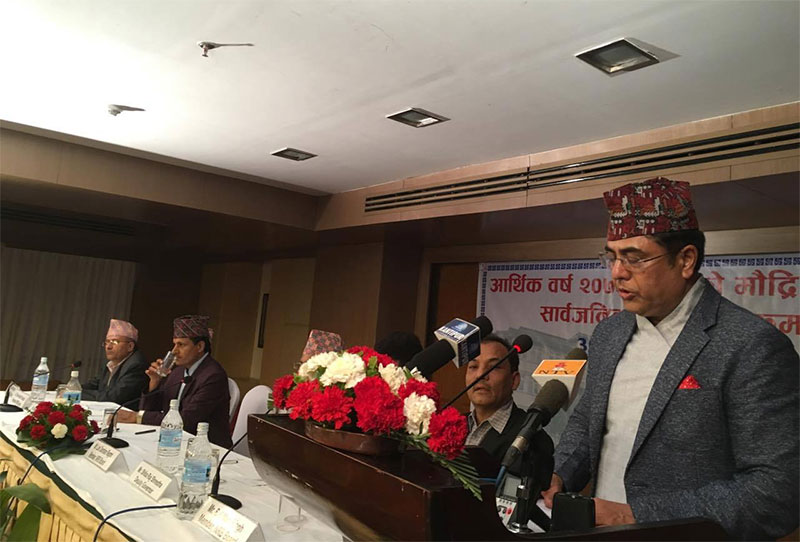 KATHMANDU, July 14: In a bid to tighten the flow of finance from the banking sector to the stock market, Nepal Rastra Bank (NRB) has revised the policy to float loans of banks and financial institutions (BFIs) against the shares pledge. Issuing the monetary policy for the fiscal year 2016/17 today, NRB Governor Chiranjibi Nepal announced the revision on the valuation of the shares which BFIS accept as collateral to float their loans.

According to the revised policy, BFIs will be able to float only 50 percent loans on the valuation of average trading price of the shares of the last 180 days or the latest market price of the share, whichever is low.

The central bank's latest measure to tighten the flow of finance toward the stock market has come in the wake of roaring stock market which has been enjoying the cheaper financing facility from the banking system due to ultra low level of interest rates.

NO CASH FOR TRANSACTION ABOVE Rs 3 million

NRB has reduced the cash transaction threshold to Rs 3 million from Rs 5 million. With the reduction on the threshold level, people will have to use checks for transactions above Rs 3 million, restricting the use of cash. The central bank believes that this measure will reduce the risks resulting from cash transactions. Priority of checks and other instruments over cash for the transactions is expected to reduce corruption, tax evasion and flow of dirty money, among other risks.

Following the introduction of five percent interest spread cap on the commercial banks, the central bank is now imposing a similar cap of seven percent on the cost of fund of the microfinance institutions. Interest spread refers generally to the difference between the interest rates that a financial institution charges on its loans and the interest rates that it provides on deposits.

The central bank has decided to cap the interest rates' difference after there were complaints that the microfinance institutions were charging exorbitant interests on the borrowers who are largely from remote areas and have less access to commercial banks and other financial institutions for the financing facility.

NRB has kept the 20 percent mandatory lending for the commercial banks to the productive sector unchanged. However, the central bank has hiked the minimum 12 percent of the productive sector lending on agricultural and energy sectors to 15 percent. This means commercial banks will now have to float their 20 percent of loans on the productive sectors and 15 percent of such loans must be extended on agriculture and energy sectors. Similarly, five percent of the deprived sector lending requirement for the commercial banks has been continued in the monetary policy. But, the commercial banks, which were floating such loans through microfinance institutions, will now have to lend at least two percent such loans themselves. Bankers, however, say that such requirement will be hard to meet, as banks do not have their own mechanism or channel to extend such loans. "This provision was an unexpected one. Since we do not have the our own mechanism to float such loans, we were lending through microfinance institutions," said Upendra Poudyal, president of Nepal Bankers Association.

Since the UML-led government has lost the support of its coalition partner CPN (Maoist Center), the central bank led by the NRB governor who was appointed by Nepali Congress (NC), did not bring in the policy requiring banks to lend against the educational certificate guarantee as announced in the budget speech.

Speaking at the ceremony, NRB Governor Nepal, however, said that such policy should not be mentioned in the monetary policy. "Bankers are here. They will decide on whether to float such loans. We do not need to state such policy in the monetary policy," said Nepal. Presenting the budget for the upcoming fiscal year 2016/17, Finance Minister Bishnu Prasad Paudel had said that arrangements will be made so as to avail interest-free loan against the collateral of academic certificates, to the students willing to pursue higher education equivalent to Bachelor’s Degree or above.

70% of CRR SHOULD BE MAINTAINED DAILY

NRB left the Cash Reserve Ratio for the BFIs unchanged. However, the period to maintain the CRR has been increased to two weeks from one weeks with requirement for the BFIs to maintain at least 70 percent of cash daily out of the total cash reserve requirement level. This means that the commercial banks, who were required to keep 6 percent of their cash reserves in the central bank every week, will now required to keep such reserve in every two weeks with maintaining 70 percent reserve daily.  Earlier, BFIs could maintain such CRR at the end of the week, allowing them a facility to borrow such cash from other BFIs in case they lack  the fund through a system of interbank lending.

NRB may backtrack from measures to rein in soaring stock market

KATHMANDU, July 14: Nepal Rastra Bank (NRB) is likely to backtrack from its preparation to restrict flow of fund to... Read More...