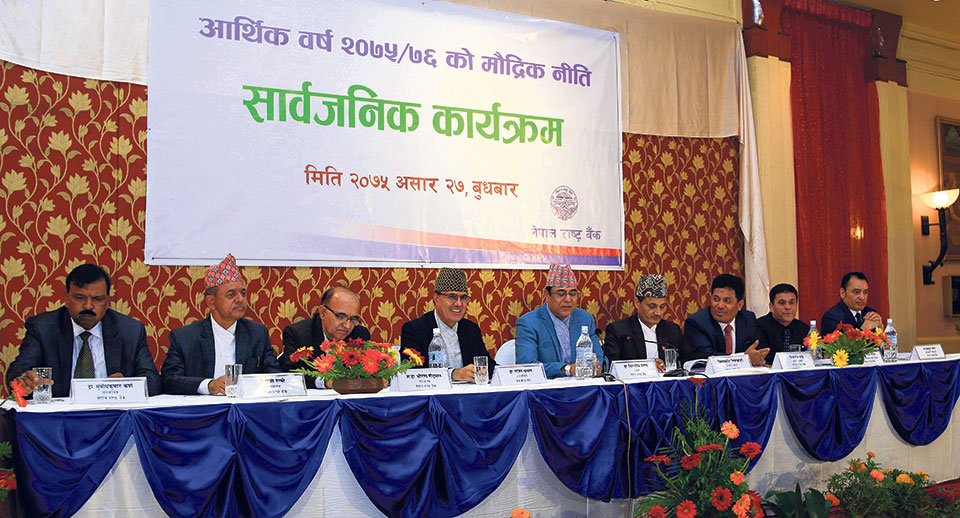 KATHMANDU, July 12: Nepal Rastra Bank (NRB) has controlled the flow of investment of bank and financial institutions (BFIs) toward revolving type of credit including overdraft.

Personal overdraft refers to a type of credit which a banking institution allows an individual to use anytime for any purpose.

Officials of the central bank say that the move to tighten the personal overdraft loan is aimed at curbing the flow of fund toward speculative purposes like real estate and stock market at a time when the banking industry is facing acute shortage of lendable fund.

“At a time when bankers are complaining about shortage of resources to make investment, the share of revolving type of loans to total loans is 18 percent, which is very high. A huge amount of such fund, particularly extended under the overdraft, is being mobilized for speculative purposes,” Nara Bahadur Thapa, executive director of the NRB, said. “This is the tool that will address the problem of scarce fund as banks will have more money at their disposal to lend in priority sectors.”

While the central bank has reduced the ceiling of personal overdraft, it has not tightened overdraft facility that is used for business and industrial purpose. However, some analysts are worried that the measure may hit the financial source for small and medium enterprises that often utilize personal overdraft for their businesses.

Similarly, the NRB has now made it mandatory for BFIs to independently verify the current asset and liabilities statement of the borrowers from third party to approve or renew overdraft facility of above Rs 250 million.

At a time when stocks are on a free fall mainly due to sky-high interest rates, the monetary policy has come up with a measure to provide a sigh of relief to investors who rely on borrowed funds to buy stocks.

The new measure may reduce the frequency of margin calls from BFIs whenever the prices of stocks take a dip. The central bank, in its monetary policy, said that a banking institution may not be forced to make margin call to borrowers when the share price falls by 20 percent. This means that shareholders would not be asked by BFIs to deposit more fund or pledge additional shares before the value of share falls below 20 percent.

“The monetary policy has brought a 20 percent cushion for shareholders who have borrowed from banks to buy shares. This will reduce immediate panic selloff in the market when stocks fall,” Dilip Munankarmi, an investor, said.

However, the central bank has reduced the limit of loans that BFIs can float to stock market. According to the new provision, a bank will not be allowed to float more than 25 percent of their core capital on margin type loans, down from existing 40 percent.

Through the monetary policy, the central bank has tried to provide a relief from the current stock downturn while trying to limit the over exposure of banking investment in share market.

“By limiting margin loans to 25 percent of core capital, we want to curtail flow of unnecessary resources into stock market. However, we have also tried to provide an immediate relief for investors from the looming crisis in the stock market,” he added.

KATHMANDU, July 14 In a bid to tighten the flow of finance from the banking sector to the stock market,... Read More...

NRB may backtrack from measures to rein in soaring stock market

KATHMANDU, July 14: Nepal Rastra Bank (NRB) is likely to backtrack from its preparation to restrict flow of fund to... Read More...