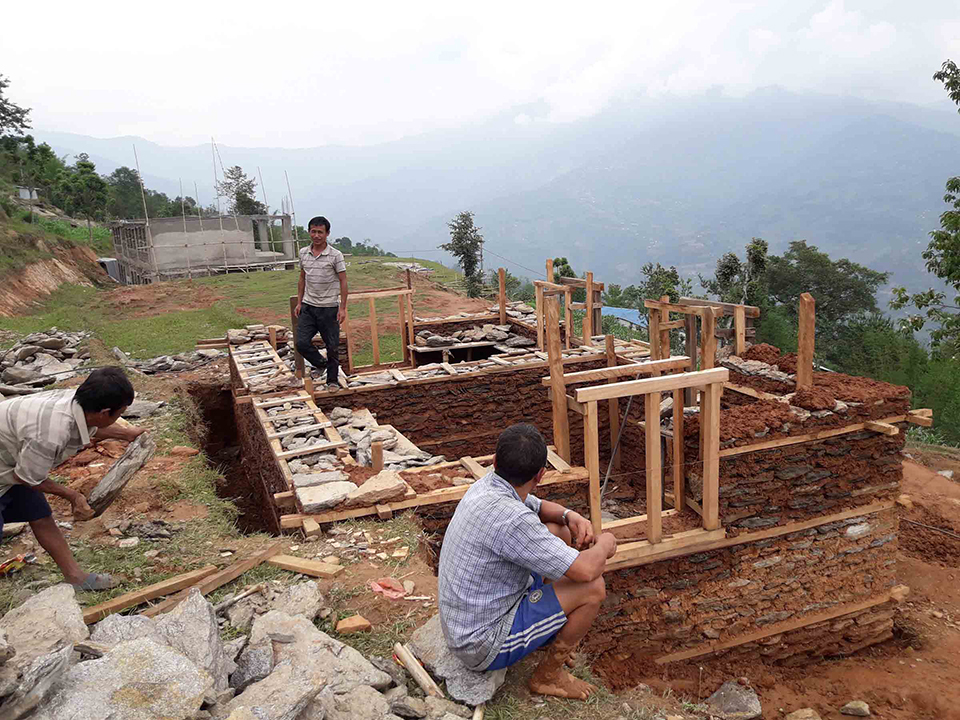 Daman Rai/Republica An earthquake victim's under construction house at Lafyang of Khotang. The government has started distributing third installment of the housing grant in the district.

KHOTANG, Oct 3: After three years of the disaster, the government has started distributing the third and the final installment of house grant to earthquake victims in Khotang. As many as 138 quake victims from Khotang who were rendered homeless by the 7.8 magnitude of earthquake on 25 April and its aftershocks recently received the third installment. They received the installment on the basis of the progress made in their house construction. Only the houses constructed as per government-set standards, are eligible for receiving the third trench of the housing grant.

If they had given us all the money at once, we could have worked speedily. However, it took them years to do that. It is not possible to construct a house with a small amount given in installments. We had to take loan and because of it things moved slowly. Such delays created unnecessary hassles to victims like us. -Shyam Kumar Thapa, an earthquake victim

"Among 8,443 victims, a few have not even received the first installment. At the time of distribution, some were abroad. Some have not come back yet. In some cases, there has been death of the registered beneficiary," said Acharya. "And in some other cases, they have not followed the procedure properly, along with banking and other issues," he added.

The second installment was worth Rs 150,000 which was given to the victims after they produced the certificate qualifying them of meeting the government-set standard for constructing their houses. Apart from house grant, they were also given Rs 25,000 for the construction of toilet.

The NRA has been distributing the installments through Rastriya Banijya Bank, Salapa Biskash Bank, Jyoti Bikash Bank, Bank of Kathmandu and Century Bank.

The slow pace of reconstruction has upset some quake victims. According to them, they faced enough hassles even to receive small amount of the grant. They claim that the lethargic procedures have still deprived some others from getting it. "Not all victims have been able to claim the grant. The process to claim it was not easy," said Shyam Kumar Thapa of Sachhitapokhari village. "Filling forms, visiting banks, dealing with government officials and engineers is not an easy task for everyone. Many people are illiterate and its hard for them to fulfill all the procedural requirements," he added.

According to him, nearly 36 months were taken for providing the grant and this is not fair. This has not only increased the construction cost but also affected their normal life and their plan.

"If they had given us all the money at once, we could have worked speedily. However, it took them years to do that. It is not possible to construct a house with a small amount given in installments. We had to take loan and because of it things moved slowly. Such delays created unnecessary hassles to victims like us," he said.

Despite widespread criticism, the authority has not been able to speed up with reconstruction work satisfactorily.

NRA officials admit that there are lapses in the system. While it was mandatory for victims to get their house design certified by engineers, the NRA had not deputed sufficient number of engineers at the construction sites to enforce the regulation. Later on, its engineers did not appear on time to inspect the rebuilding process either. This kept the victims waiting. They had to put the construction on hold. According to Thapa, the government did not care about the plights of the victims.

"We were made to live under tents for months. Then they said we are being given house grant. But that took months again. Actually the government was not sensitive about our plight," said Thapa. "Even now over lives have not come back on track, we still continue to struggle with the effects of the disaster. Earthquake is not over for us," he added.

"There was no dearth of support. But the government could not help us adequately. Some quake victims have shifted to new house but some are still in tents. This is happening due to corruption and poor reconstruction management," he added. As per the data of the NRA 13,799 houses were damaged in Khotang district. Over 9,000 people were killed and millions were displaced due to the earthquake across the nation.

KATHMANDU, June 29: Almost 70 per cent of the households whose houses were damaged by the 2015 earthquakes have either started... Read More...