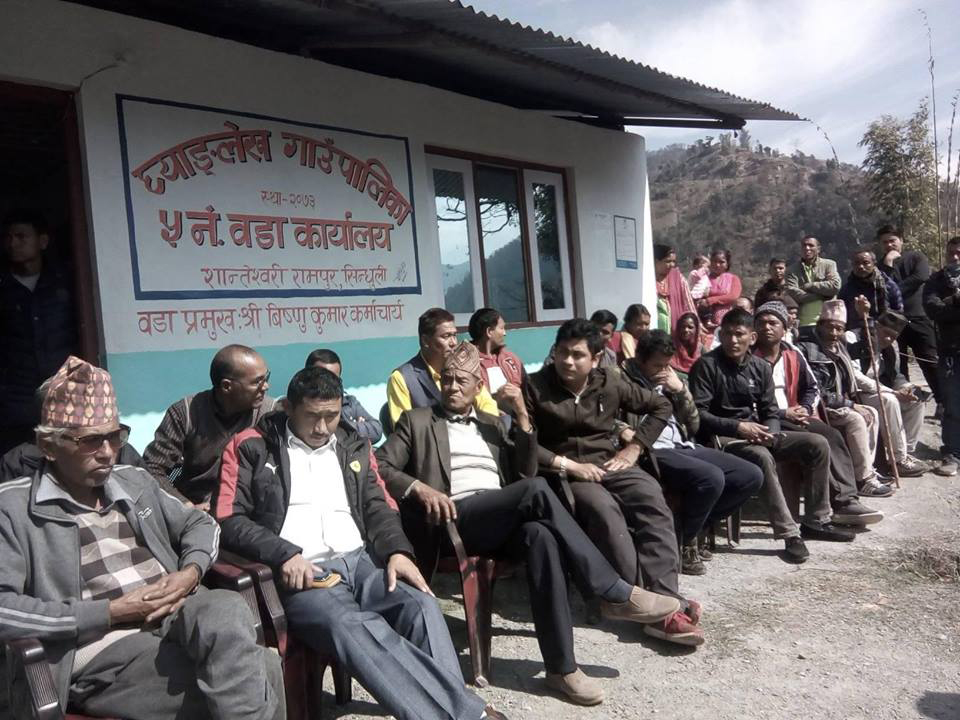 Representatives and earthquake victims of Ghyallekh Rural Municipality-5 who have gathered to speak about the issue of absence of engineers.

SINDHULI, Feb 20: On August 12, National Reconstruction Authority's Central Project Implementation Unit (Grant Management and Local Infrastructure), Kathmandu, publicized a notice. Quake victims were informed that they could transfer their names from the list of Retrofitting grant recipients to reconstruction beneficiaries.

Following the notice, some of the quake victims in Ghyallekh Rural Municipality-5 submitted their applications requesting to be listed as reconstruction grant recipients. However, instead of going through the applications, the ward office has piled its applications for almost six months.

This has made the victims worried that they might be deprived of the reconstruction grant. The detail of ward office, recommendation of engineer, photocopy of the decision made by ward level Grievance Management Committee, as well as the recommendation of the rural municipality and the municipality is submitted with the application. Though the applicants have arranged all the other documents, they could not get the recommendation of the engineer, as they do not have any in their ward."It has been more than five months since I submitted the application but have received no response," said Retrofitting grant recipient Man Bahadur Thing, adding, "We made rounds of the ward office for collecting other documents but the application has not proceeded as we lack the recommendation of the engineer."Though the government has mobilized engineers in each local unit, Thing says he has only seen Sub-engineer and Assistant Sub-engineer in his ward. Belimaya Thing who also submitted a similar application has been disappointed by the sluggish work. "They just played with our emotions by offering us fake hope," laments Belimaya.

Ward chief Bishnu Kumar Karmacharya laments that not even a single engineer has been deployed in the village yet. This is a common problem in all the rural villages here. "We had forwarded the applications with the signature of sub-engineers as we don't have an engineer but they were returned," said ward Chief Karmacharya, adding, "We have been told that the signatures of engineer are compulsory."

The government has deployed a technical team for solving the problems of quake victims, but still Karmacharya had to reach out to them on his own, as the technical team does not stay in the ward.

Jagat Bholan, chairperson of Gyallekh Rural Municipality, says no engineer has been deployed in his ward so far. "Not even a single engineer has stepped in our village till now," said Bholan. It is not as if the government has not mobilized or paid the engineers but they refuse to stay in the rural areas.

As per the record maintained by the implementation unit, there are around 13,000 retrofitting grant recipients in the district of which the applications of 90 have been forwarded to the central office. However, the central office is yet to give its feedback on them.Caption: Representatives and earthquake victims of Ghyallekh Rural Municipality-5 who have gathered to speak about the issue of absence of engineers.

KATHMANDU, March 31: The National Reconstruction Authority (NRA) has started deploying engineers - a total of 550 of them- for the... Read More...

KHOTANG, Oct 3: After three years of the disaster, the government has started distributing the third and the final installment of... Read More...