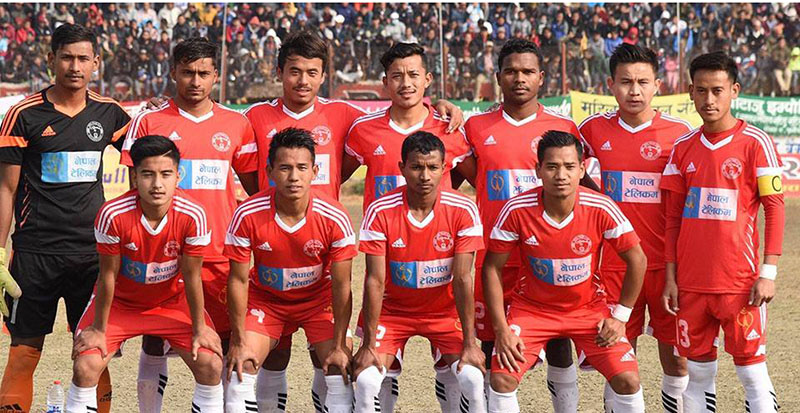 Nepal Police Club has embarked on a new journey by defeating Manang Marshyangdi Club (MMC) by 3-1 at the quarter final held today.

None of the sides made any goals in the first half and ended in a tie. Considered comparatively weaker, NPC managed to put its opponent under pressure and scored three goals in only the second half.

NPC took lead against MMC after Nir Kumar Rai scored a goal in the 53rd minute.

Similarly, MMC trailed behind with 0-2 goals after Dinesh Rajbangsi made another goal in the 56th minute capitalizing on Nir Kumar’s pass.

Suman Lama gave NPC a 3-0 lead against its opponent in the 71st minute.

For MMC, Bishal Rai opened an account in the 80th minute but could not put the opponent under pressure after it failed to utilize some golden opportunities.

Suman Lama of NPC was declared ‘man of the match in the tournament.
NPC had entered the quarter-final by defeating Jhapa-11 by 1-0 goal while MMC was directly qualified for the the next round.

To be held until February 3, as many as 12 teams including two foreign ones are taking part in the football tournament.

Sponsored by Himshree Foods P. Pvt, the lucky spectator will get Hiro Dash Scooter as a prize, said the organizer.