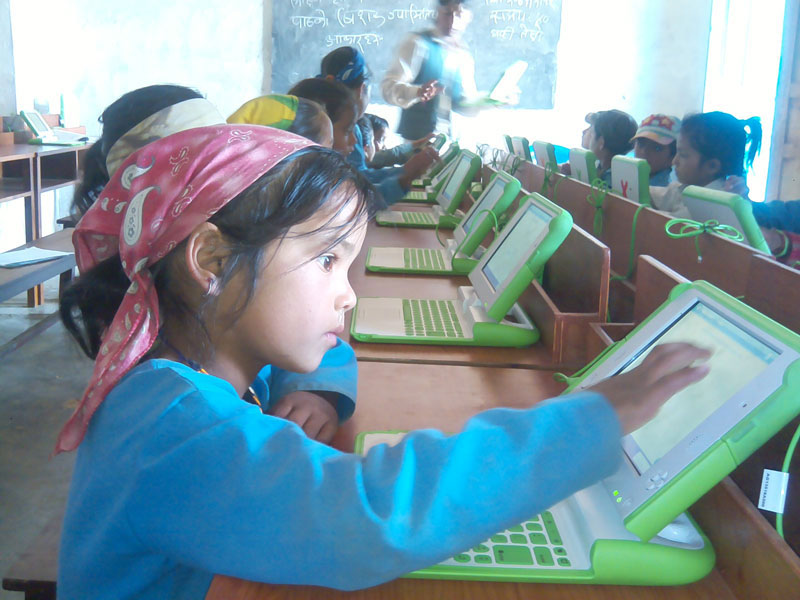 Accessing internet won’t suffice. We also need to tailor content as per the needs of local school children whose medium of learning is Nepali
Post-earthquake, teachers in Sindhupalchowk were donated laptops, a prized possession due to their portability. Someone carrying a laptop has a certain ‘edge’. The reason it generates excitement can be attributed to so-called apparent ‘expert’ power. But coming to today, most of these devices are being used for social networking and watching movies. A public school teacher from Syangja has even gone further, making himself a ‘consultant’ who can now write letters on behalf of common people to different government agencies.

Recently, the National Center for Educational Development (NCED) launched a program in which students could attend online classes. This is something magical. A teacher sitting in the comfort of home or a studio can reach millions of children in different parts of the country. But has there been any homework if such a system works in Nepal? The cyber optimists and educationists claim this is better than nothing. Pessimists would say nothing is better than something useless. They argue that reading out ‘bullet points’ from a standard power point slide won’t be engaging for students.

Two years ago, an interesting headline appeared in one of the national newspapers: “Students transferring from private to government schools”. The reason cited was opportunity in the form of scholarships and incentives provided to students graduating from public schools. Community school leaders were quick to attribute this ‘success’ to the availability of internet in their schools. The truth is students barely got to touch these sacred machines.

It is not that nothing has been done to take ICT enabled services to students to augment their learning. The government introduced information and communication technology in 116 community schools across the Sindhupalchowk district. The government, through district education office, would provide Rs 140,000 to schools that meet its criteria. The idea was to equip schools with computers for greater internet use. The cynics would argue that this was an ill-designed program as the amount raised was inadequate to acquire five computers and a printer that the amount supposedly bought.

Content is the most important consideration when it comes to use of technology.

Accessing internet will not suffice, if there is no content to meet the learning needs of a child who only understands Nepali.

Nepal features in the official website of the one.laptop.org as one of the countries that participated in one-laptop-per-child project. It was a project implemented in 26 schools across six districts of Nepal.

Conceived in 2006, the idea was to build an inexpensive, child-friendly laptop that was rugged, ‘low-cost’, low-power and ‘connected’. Years after its implementation, The Economist came up with a cover story entitled “Error Message.” The money that was spent, US$199 per machine, could instead have been used to buy 400 books for school library.

The push for more technology is relentless nonetheless.

Nepal’s Department of Education has embarked on developing digital content for grades two to six. The Nepal Telecom Authority has now taken a further step by making broadband connection available to schools.

For rest of the world, financial accessibility may not be a constraint but for us it still continues to be a major problem. The fact that only 4.7 percent of our GDP is spent on education speaks volumes. Even in this fiscal, only Rs 98.6 billion was allocated for education.

Though education sector budget has increased by Rs 12 billion as compared to the previous year, there has been a decline in education spending over the past one decade.

The share of education in total budget has declined by two percent from last year and by four percent since 2012/13.

It is impossible for the West to think of education sans information technology. The limited access to internet still continues to be a problem in Nepal, but it might not be so for long.

There is no denying that use of technology has been one of the most researched areas in the past two decades. The idea is that so long as a country has limited internet access, little financial accessibility, lack of trained staff and no clear policy, it would be premature to expect immediate results. The unfortunate scenario is that while we seem to be doing well in bits and pieces, just taking internet to schools won’t result in miracles.