Not an easy ride 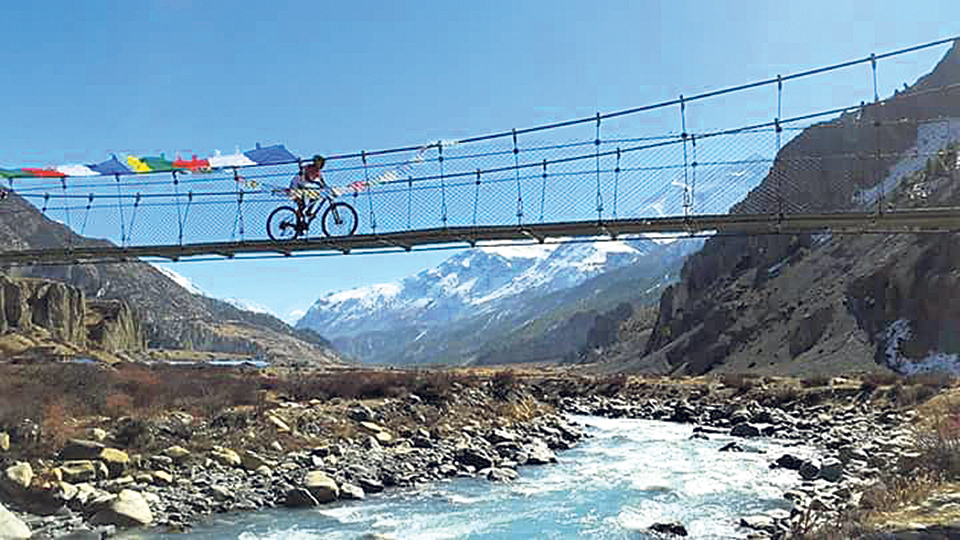 On any ordinary day you will find Laxmi Magar cruising through the streets of Kathmandu on her bicycle. And on the no-so-ordinary days you will see her racing down the most difficult trails at high altitudes clad in biking gear and on her professional bike, usually on the frontlines. Laxmi is one of Nepal’s top mountain bikers and as one of the only female cyclists regularly competing in international races she is a big name in the cycling community.

Just recently she competed in the seven day Trans Alps race in Europe where she finished fifth. One of the biggest biking events, Trans Alps follows one of the more challenging trail routes and Laxmi made quite a stir this year. Currently she is preparing to represent Nepal in the upcoming South Asian Games where Laxmi is expected to perform well. Mountain biking has been included for the very first time in this year’s SAF Games so doing well has become all the more important for Laxmi. She knows there’s a lot of hope riding on her.

Keeping tabs on all the tournaments Laxmi has participated in and won is something she has given up a long time ago but her being referred to as ‘Nepal’s Queen of the Mountains’ should be indicative of just how much she has achieved. Recipient of the Bhawani Award (Celebrity Womanhood), coming second in Yak Attack (one of the toughest marathons), winner of MTB Himalaya, India and Manali Khardhungla Cycle Championship are some of the many feathers in her steadily burgeoning hat.

However, Laxmi says all this was never intentional. Learning to ride a bike for her wasn’t an adventurous or even an exciting happening. She learnt to ride a bike because she needed to commute and a cycle was all that she could afford. She started riding because of need and could never have guessed back then that she would, one day, make a career out of riding bikes, and that it would take her so far.

It was a chance happening – some of her runner friends offering her a chance to participate in a mountain bike race – that led her to competitive racing. Knowing about her family’s dire financial state, her friends even offered to help her find the appropriate gear and a bike and that was all the convincing she needed. That was 2008 and Laxmi was 20 years old then. The race was through the Kakani hills and Laxmi came in third. “I had no training whatsoever and I was participating in the race on borrowed gear. I knew it then that if I worked hard and trained I could do better in the future,” says Laxmi.

But unfortunately, Laxmi was in no position to afford formal training nor did she have the right equipment or even an appropriate bike for that matter. She reached out to the few bikers she knew and asked them to help her out. Sometimes someone would lend her a bike and other times she had to scrap enough money together to rent one.

Some professional bikers gave her advice and some tips every now and then. But, for the most part, Laxmi was her own coach. Raised in Kathmandu, she knew that there were more than enough trails for her to practice on. So she practiced on her own, every day for hours through Naikap, Shivapuri, Lakuri Bhanjyang, Kakani and many other challenging terrains.

Laxmi remembers the many times she had to practice on a broken bike. And the times her fingers were frostbitten while making descents from high altitudes due to lack of proper gear. She also recalls the time her parents chided her for running about on a cycle, something they deemed unbecoming of a woman. It didn’t help that most bikers around her were men and that it often put her in uncomfortable situations. To add to this, female bikers were kept from the many opportunities that their male counterparts easily enjoyed.

Laxmi also adds that while there would be provisions for cash prizes for the winners in the male categories, there would be nothing of the kind for females. Even if there were, the awards and benefits differed significantly. This was demoralizing to Laxmi especially since what she was doing already met with a lot of opposition at home. “I did not have much to show for what I was doing. I had trouble sustaining myself and often doubted if I could really make it,” she says.

But she ploughed through anyway, opposing the gender disparity in her sport, participating in mixed races and often finishing in top positions. Over the years, she has built her own network of friends in Nepal and beyond who assist her with funding and participating in international tournaments. As Laxmi trains and aims for gold at this SAF Games (to be held in December 2019), she says she is motivated and fueled by her decade-long journey of struggles and hard work.

Laxmi has also taken it upon herself to mentor upcoming female bikers. She trains them in hopes that they will take forward women’s mountain biking which she admits is still at a nascent stage.

“There’s a lot of ground we need to cover,” she says, “And I’m willing to do anything it takes to make people take women in sports more seriously.”