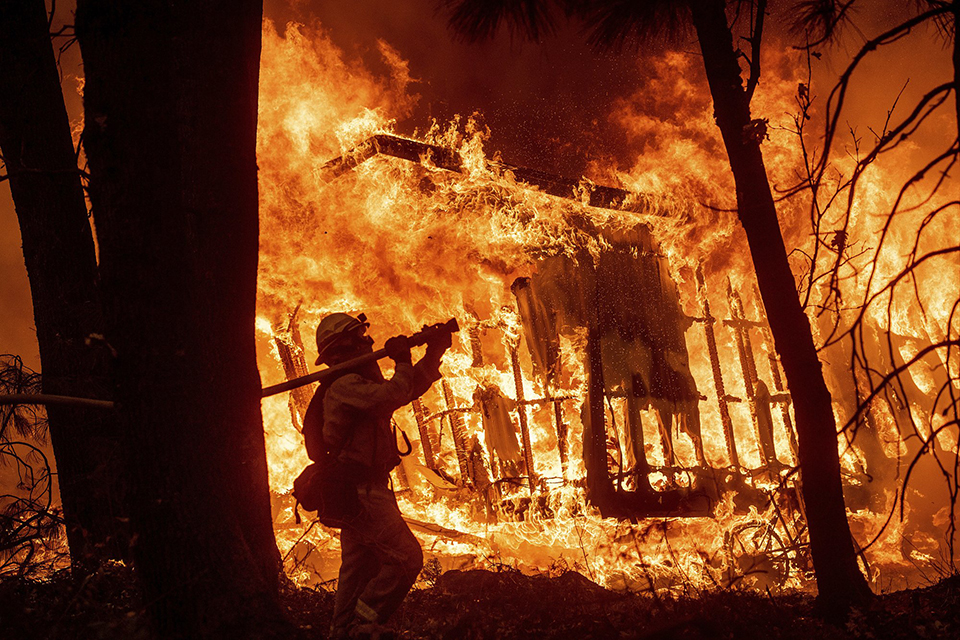 CALIFORNIA, Nov 15: As the scope of a deadly Northern California wildfire set in, the sheriff said more than 450 people had now been assigned to comb through the charred remains in search for more bodies. The blaze has killed at least 56 people and authorities say 130 are unaccounted for.

Many of the missing are elderly and from Magalia, a forested town of about 11,000 to the north of Paradise.

The one major roadway that runs through the mostly residential town is dotted with gas stations, a pizza shop, a hair salon and Chinese restaurant and convenience stores. There is no Main Street or town center. Resident Johnny Pohmagevich says a Rite Aid on the main road is as much of a center as the town has.“When I say downtown I mean Paradise,” said Pohmagevich, who opted to stay in Magalia even as fire closed in.

Pohmagevich, an 18-year Magalia resident who works at Timber Ridge Real Estate and lives just up the road from many burned homes, said he stayed to protect his employer’s property from looters and to prepare some cabins and mobile homes so business tenants can live if they come back.

“If this town does recover, it’s going to take many, many years,” he said. A week after the deadly Camp Fire struck, police teams drive around Magalia searching for those still in their homes, checking if they need any food and water. Crews from Pacific Gas & Electric are also in the area. With the death toll at 56, it is the deadliest wildfire in a century. There were also three fatalities from separate blazes in Southern California.

As officials raised the loss of homes to nearly 8,800 Wednesday, Sheriff Kory Honea said the task of recovering remains had become so vast that his office brought in another 287 searchers Wednesday, including National Guard troops, bringing the total number of searchers to 461 plus 22 cadaver dogs. He said a rapid-DNA assessment system was expected to be in place soon to speed up identifications of the dead, though officials have tentatively identified 47 of the 56.

Interior Secretary Ryan Zinke joined California Gov. Jerry Brown Wednesday on a visit to the nearby leveled town of Paradise, telling reporters it was the worst fire devastation he had ever seen.

“Now is not the time to point fingers,” Zinke said. “There are lots of reasons these catastrophic fires are happening.” He cited warmer temperatures, dead trees and the poor forest management.

“This is so devastating that I don’t really have the words to describe it,” Brown said, saying officials would need to learn how to better prevent fires from becoming so deadly .

It will take years to rebuild, if people decide that’s what should be done, said Brock Long, administrator of the Federal Emergency Management Agency.

“The infrastructure is basically a total rebuild at this point,” Long said.

While most of the town of Paradise was wiped out, in Magalia, a sharp dividing line marks those that survived and those that did not.

“Magalia has so many trees. I honestly can’t believe it just didn’t get leveled,” said Sheri Palade, an area real estate agent.

For some, the areas left untouched offered a ray of hope.

Tom Driver, the office manager and elder at Magalia Community Church, said he had heard the church survived the blaze, though he did not know the status of his own home.

“I’ve been able to account for all of the congregation,” said Driver, who is staying with family in Oakland. “They’re all over the place but they got out in pretty good time.”

Driver said many residents of Magalia work at the university in Chico or out of their homes. When the blaze spread into Paradise, residents there drove down and faced horrendous traffic. Driver said he and some others in Magalia were able to escape north on a winding narrow road that put them ahead of the fire, not behind it.

Kim Bonini heard someone on a bullhorn two blocks over on Thursday urging people to leave. The power in her home had gone out that morning, leaving her only with her car radio to tell her if she needed to leave.

The cause of the fire remained under investigation, but it broke out around the time and place that a utility reported equipment trouble.

PARADISE, Nov 12: The death toll from wildfires raging in California rose to 31 on Sunday after six more people... Read More...