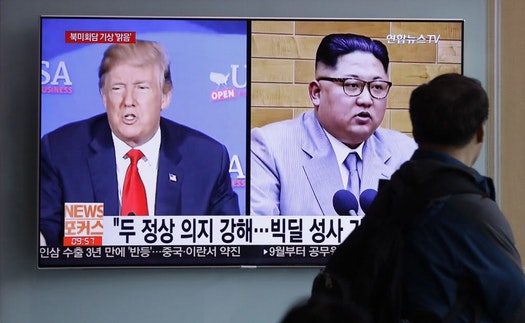 SOUTH KOREA, May 16: North Korea on Wednesday canceled a high-level meeting with South Korea and threatened to scrap a historic summit next month between President Donald Trump and North Korean leader Kim Jong Un over military exercises between Seoul and Washington that Pyongyang has long claimed are invasion rehearsals.

The surprise declaration, which came in a pre-dawn dispatch in North Korea's state media, appears to cool what had been an unusual flurry of outreach from a country that last year conducted a provocative series of weapons tests that had many fearing the region was on the edge of war. It's still unclear, however, whether the North intends to scuttle all diplomacy or merely wants to gain leverage ahead of the planned June 12 talks between Kim and Trump.

The statement by North Korea's Korean Central News Agency was released hours before the two Koreas were to meet at a border village to discuss how to implement their leaders' recent agreements to reduce military tensions along their heavily fortified border and improve their overall ties.

It called the two-week Max Thunder drills, which began Monday and reportedly include about 100 aircraft, an "intended military provocation" and an "apparent challenge" to an April summit between Kim and South Korean President Moon Jae-in, when the leaders met on their border in their countries' third summit talks since their formal division in 1948. KCNA said the U.S. aircraft mobilized for the drills include nuclear-capable B-52 bombers and stealth F-22 fighter jets, two of the U.S. military assets it has previously said are aimed at launching nuclear strikes on the North.

South Korea's Defense Ministry said the drills will go on as planned.

North Korea's first vice foreign minister, Kim Kye Gwan, later released a separate statement saying Pyongyang has no interest in a summit with Washington if it's going to be a "one-sided" affair where it's pressured to give up its nukes.

SEOUL, May 16: North Korea on Wednesday canceled a high-level meeting with South Korea and threatened to scrap a historic summit... Read More...