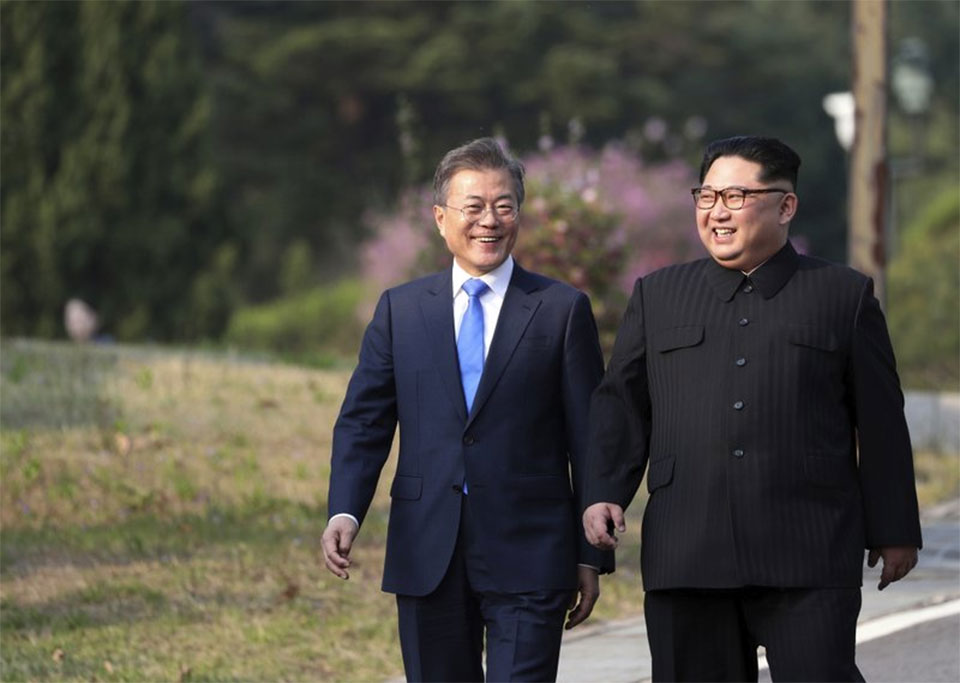 GOYANG, April 28: North Korean state media were silent Saturday, a day after the leaders of the two Koreas met and vowed to remove nuclear weapons from the peninsula and work toward a formal end to the Korean War. Despite the bold declaration, North Korean leader Kim Jong Un and South Korean President Moon Jae-in failed to provide any new measures on a nuclear standoff that has captivated and terrified millions.

North Korea’s media have not publicly mentioned the summit since reporting early Friday that Kim had left the capital Pyongyang to meet with Moon. It’s possible the North is spending extra time so that its propaganda experts can give the summit a major news treatment on television and in newspapers later Saturday.

If the substance on nuclear matters was light, the images Friday at the border village of Panmunjom were striking: Kim and Moon set aside a year that saw them seemingly on the verge of war, grasped hands and strode together across the cracked concrete slab that marks the Koreas’ border.

The sight, inconceivable just months ago, allowed the leaders to step forward toward the possibility of a cooperative future even as they acknowledged a fraught past and the widespread skepticism that, after decades of failed diplomacy, things will be any different this time.

On the nuclear issue, the leaders merely repeated a previous vow to rid their peninsula of nuclear weapons, saying they will achieve a “nuclear-free Korean Peninsula through complete denuclearization.” This kicks one of the world’s most pressing issues down the road to a much-anticipated summit between Kim and President Donald Trump in coming weeks.

“There is no reference to verification, timetables, or an attempt to define the word ‘complete.’ It does not reiterate or advance Pyongyang’s unilateral offer to halt nuclear and ICBM tests,” said Adam Mount, a senior defense analyst at the Federation of American Scientists. “In practice, this statement should enable a U.S.-North Korea summit to detail specifics about what, when, and how denuclearization would occur, but it has not offered a head start on that process. All of the negotiation is left to a U.S. team that is understaffed and has little time to prepare.”

Still, the summit produced the spectacle of two men from nations with a deep and bitter history of acrimony grinning from ear to ear after Kim walked over the border to greet Moon, becoming the first leader of his nation to set foot on southern soil since the Korean War. Both leaders then briefly stepped together into the North and back to the South.

The summit marks a surreal, whiplash swing in relations for the countries, from nuclear threats and missile tests to intimations of peace and cooperation. Perhaps the change is best illustrated by geography: Kim and Moon’s historic handshake and a later 30-minute conversation at a footbridge on the border occurred within walking distance of the spot where a North Korean soldier fled south in a hail of gunfire last year, and where North Korean soldiers killed two U.S. soldiers with axes in 1976.

Standing next to Moon after the talks ended, Kim faced a wall of cameras beaming his image live to the world and declared that the Koreas are “linked by blood as a family and compatriots who cannot live separately.” The leaders also vowed to achieve “a nuclear-free Korean Peninsula through complete denuclearization,” something they’ve said before.

The latest declaration between the Koreas, Kim said, should not repeat the “unfortunate history of past inter-Korean agreements that only reached the starting line” before becoming derailed.

What happened Friday should be seen in the context of the last year — when the United States, its ally South Korea and North Korea threatened and raged as the North unleashed a torrent of weapons tests — but also in light of the long, destructive history of the rival Koreas, who fought one of the 20th century’s bloodiest conflicts and even today occupy a divided peninsula that’s still technically in a state of war.

Trump tweeted Friday, “KOREAN WAR TO END!” and said the U.S. “should be very proud of what is now taking place in Korea!” Both Koreas agreed to jointly push for talks this year with the U.S. and also potentially China to officially end the Korean War, which stopped with an armistice that never ended the war.

Many will be judging the summit based on the weak nuclear language. North Korea’s nuclear and missile tests last year likely put it on the threshold of becoming a legitimate nuclear power. The North, which has spent decades doggedly building its bombs despite crippling sanctions and near-constant international opprobrium, claims it has already risen to that level.

South Korean conservative politicians criticized the joint statement as letting North Korea off the hook by failing to secure a clear commitment on nuclear disarmament.

But the Koreas made inroads on a raft of other points of friction between them. Moon agreed to visit Pyongyang, North Korea’s capital, sometime in the autumn, and both leaders said they’d meet on a regular basis and exchange calls via a recently established hotline.

They agreed to settle their disagreement over their western maritime border by designating it as a peace area and securing fishing activities for both countries. They said they’d open a permanent communication office in the North Korean border town of Kaesong and resume temporary reunions of relatives separated by the 1950-53 Korean War.

“I feel like I’m firing a flare at the starting line in the moment of (the two Koreas) writing a new history in North-South relations, peace and prosperity,” Kim told Moon as they sat at a table, which had been built so that exactly 2018 millimeters separated them, to begin their closed-door talks.

Kim acknowledged the widespread skepticism over their summit. “We have reached big agreements before but were unable to fulfill them. ... There are skeptical views on whether the meeting today will yield meaningful results,” Kim said. “If we maintain a firm will and proceed forward hand in hand, it will be impossible at least for things to get worse than they are now.”

The historic greeting of the two leaders, which may be the images most remembered from the summit, was planned to the last detail, though the multiple border crossings may have been impromptu. As thousands of journalists, who were kept in a huge conference center well away from the summit, except for a small group of tightly controlled pool reporters at the border, waited and watched, Moon stood near the Koreas’ dividing line, moving forward the moment he glimpsed Kim, dressed in dark, Mao-style suit, appearing in front of a building on the northern side. They smiled broadly and shook hands with the border line between them. Moon then invited Kim to cross into the South, and, after Kim did so, Moon said, “You have crossed into the South, but when do I get to go across?” Kim replied, “Why don’t we go across now?” and then grasped Moon’s hand and led him into the North and then back into the South.

Expectations were generally low on the nuclear issue, given that past so-called breakthroughs on North Korea’s weapons have collapsed amid acrimonious charges of cheating and bad faith. Skeptics of engagement have long said that the North often turns to interminable rounds of diplomacy meant to ease the pain of sanctions — giving it time to perfect its weapons and win aid for unfulfilled nuclear promises.

Advocates of engagement, however, say the only way to get a deal is to do what the Koreas tried Friday: Sit down and see what’s possible.