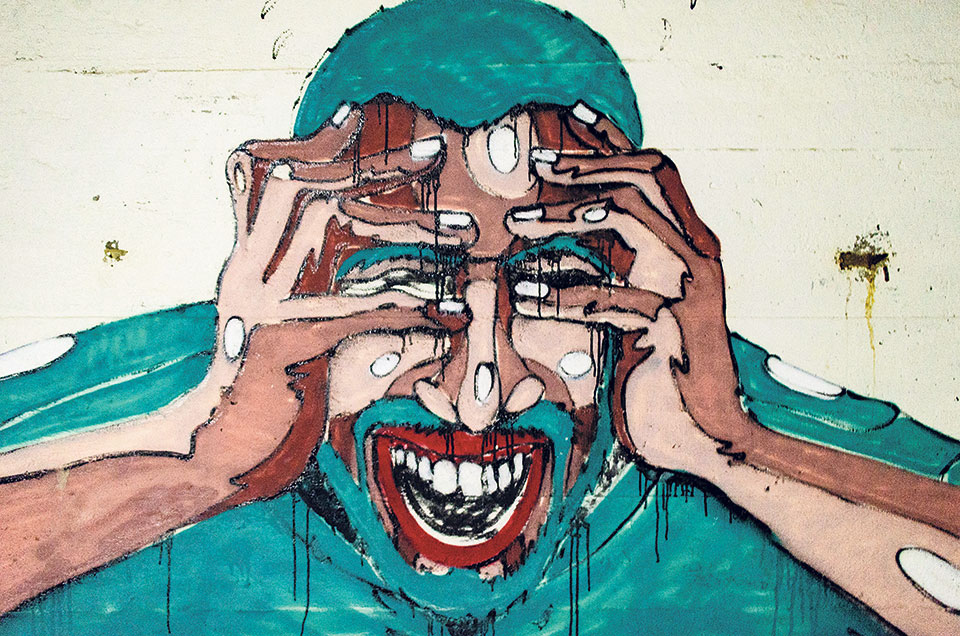 Mental health is one of the least prioritized areas in the health care sector of Nepal. There is one major national psychiatric hospital in Kathmandu run by the Nepal Government, and other smaller psychiatry units in various hospitals. A few civil society organizations run programs and clinics providing mental health care, with a focus on raising awareness and giving counseling and support for access to medical care.

Even with all these efforts, the majority of the population is still deprived of basic mental health services that greatly impede their quality of life. The most challenging thing for many people with mental illnesses is that they are not accepted by their own family members and society, and people living with psychosocial disabilities often experience discrimination.

“There are six quite common mental illness and most people might suffer from at least one of them. The degree of its severity may vary as every individual deals with things differently,” says Dr Rosy Shrestha.

Most mental health problems can be easily and effectively tackled with medication and counseling but the problem is people are reluctant to seek help, says Dr Shrestha. Why is that that we shy away from speaking up about mental disorders and instead of seeking help and supporting people who are depressed or anxious, we choose to brush it under the carpet.

Most mental health practitioners agree that seeking help early can help avoid many future mental health complications. Here, Dr Shrestha lists some common mental health problems that should be timely addressed in a bid to make people aware of what it is so that people are one step closer to accepting it.

Depression
When we think about depression, we link it with the social scenario of a person’s life. Dr Shrestha says that’s not the case because depression can also be genetic. If your mother or father has a history of depression, you are prone to it too but there is no valid scientific explanation for it. The main signs of depression are lack of interest in life, mood swings and feeling low. People feel hopeless, worthless, and helpless for no reason. According to Dr Shrestha, one in five people suffer from depression in their lifetime and depression is more common in women than in men.

Obsessive-Compulsive Disorder
The main signs of it, as the name suggests, are obsession and compulsion in doing things repetitively and unnecessarily. You know you don’t need to do it but your brain makes it a compulsion to do so. The need to wash hands frequently because you think it’s not clean however hard you scrubbed it just minutes ago or rechecking things even when you know you have done it already are some examples. “OCD is a common, chronic, and long-lasting disorder in which a person has uncontrollable, reoccurring thoughts (obsessions) and/or behaviors (compulsions) that he or she feels the urge to repeat over and over,” says Dr Shrestha adding that
it’s a very common mental health issue, especially among young people. OCD is one of the 20 diseases that cause the most serious disease burden among people between the ages of 15 to 44.

Anorexia
Anorexia is also a mental illness, though it’s mainly an eating disorder. Most people who suffer from anorexia cannot maintain a healthy eating habit, often choosing to eat very less or nothing at all for days on end. In severe cases, they need to rely on drugs to maintain their lives. According to Dr Shrestha, if it’s not treated on time, it will cause the body to become extremely weak and malnourished. Apparently, those suffering from anorexia can eventually die from cardiac complications, multiple organ failure, and other secondary infections.

Schizophrenia
Schizophrenia is a group of severe psychiatric diseases with unknown etiology. It has many manifestations. However, hallucinations, delusions, irritability, depression and anxiety, and cognitive deficits are common symptoms. There have also been cases where people form an identity and stick to it to the extent that they don’t believe the truth anymore. There’s also delusion of perception where people believe that whoever approaches them is out to harm them.. According to various studies, one in 10 people are likely to be schizophrenic.

Bipolar disorder
Bipolar disorder is marked by extreme shifts in mood. The symptoms can include an extremely elevated mood called mania that may also include episodes of depression and hypomania. Over talking, excessive laughing and talking unnecessarily without thinking may result in this disorder. There’s also unipolar disorder where you are either only depressed or maniac. While experiencing mania, a person with bipolar disorder may feel emotionally high. They can feel excited, impulsive, euphoric and full of energy. Dr Shrestha says there are various treatments and therapies available for this disorder and that it can be treated and controlled.

Anxiety disorder
Experiencing occasional anxiety is a normal part of life. However, people with anxiety disorders frequently have intense, excessive and persistent worries and fears about everyday situations.
Anxiety is the state of overthinking and overdoing. Anxiety disorders are a group of mental illnesses, and the distress they cause can keep you from carrying on with your life normally. For people who have an anxiety disorder, worry and fear are constant and overwhelming, and can be disabling. “But with treatment, most people can manage these feelings and get back to a fulfilling life,” concludes Dr Shrestha.

The Fear of Coronavirus Disease (COVID-19): Anxiety and Depression

This new illness certainly in frightened and needs attention but it is important to note that far more people die... Read More...

Sophie Turner opens up about suffering from depression following 'GoT' fame

In show business, fame has its own side effects. 'Game of Thrones' actor Sophie Turner finally opened up about the... Read More...