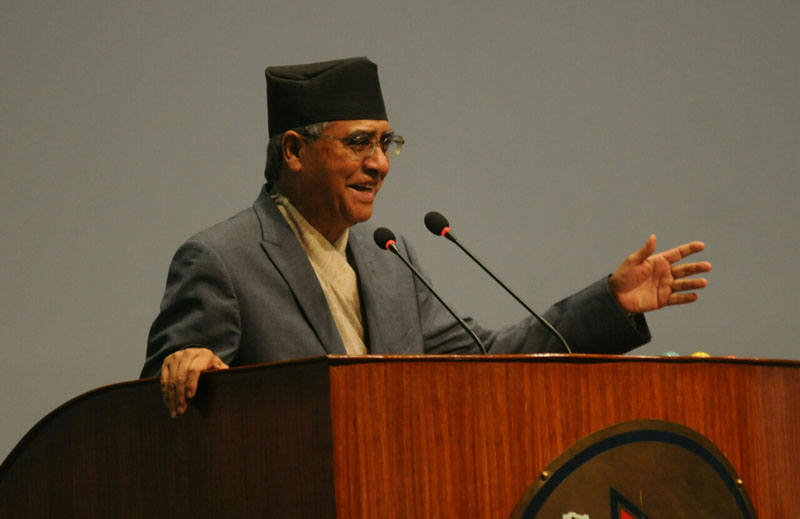 KATHMANDU, July 11: Prime Minister Sher Bahadur Deuba has said that the government has not received any proposal from the Office of the President regarding the purchase of new fleet worth Rs 160 million.

PM Deuba made such remarks while answering the lawmakers in the Legislature Parliament on Monday in course of discussions on various topics related to different bodies under the Appropriation Bill-2017.

Lawmaker Prem Suwal of Nepal Workers and Peasants Party had raised the questions on the issue of new presidential fleet. Responding to the queries, PM Deuba said, “The government has not received any proposal for purchasing expensive vehicles.”

He also said that it was inappropriate to drag the head of the state into controversy in relation to vehicles.

“Since the president is the top-most post of the country, it is obvious that appropriate vehicles should be provided giving due consideration to her stature,” Deuba said, adding,  “It is the responsibility of the government to manage the security of the president and for which the government can buy new vehicles as per the need.”

Deuba's remarks come at a time when the Ministry of Defense (MoD) is weighing over a proposal to provide additional Rs 120 million on top of previously pledged Rs 40 million to Nepal Army to buy new presidential fleet.

Office of the President has assigned the NA to initiate the process to procure vehicles. In a letter to the MoD, the NA has notified the ministry that the previously pledged amount of Rs 40 million is insufficient to buy the presidential fleet and demanded additional Rs 120 million.
“We will decide whether to seek additional fund from the Ministry of Finance after internal meeting. Our secretary is currently outside the country. The meeting will take place once he returns back,” said MoD spokesperson Uttam Naagila.

KATHMANDU, July 8: The Office of the President has sought Rs 160 million from the state coffers to buy an armored... Read More...

IPOs worth Rs 1.21 billion to be issued
29 minutes ago