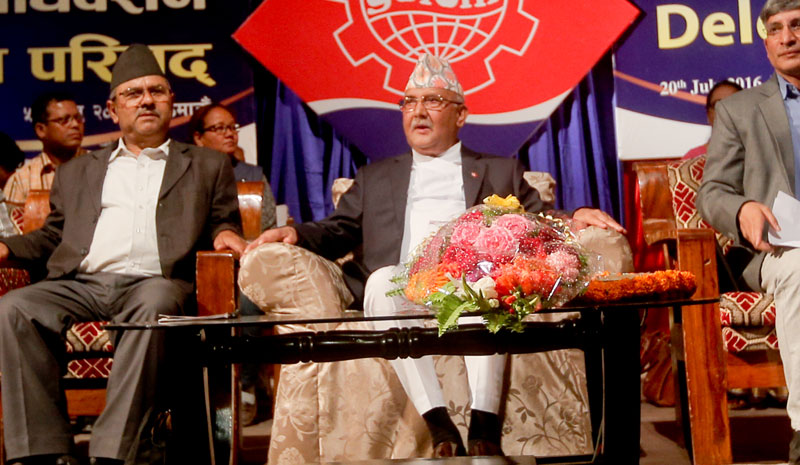 KATHMANDU, July 20: Prime Minister KP Sharma Oli has said the other parties brought the no-confidence motion against the government in the Legislature-Parliament being nervous at the government's popularity.

Inaugurating the Sixth National Convention of the General Federation of Nepalese Trade Union (GEFONT) here today, PM Oli commented that the agenda of the parliament of passing the Finance Bill was vanished when it had reached the decisive point of being passed.

He stressed on the need of upholding the dignity of the parliament, saying, "The parliament is not a place for arbitrariness and doing whatever one chooses to do. Is it only to change the government and not to pass the legislation to run the state affairs and raise tax?"

Stating that they would have to find out in the Parliament meeting on Thursday where the bill agenda that had been vanished had gone, he urged all not to move ahead forcibly.

The Legislature-Parliament is to hold discussions on Thursday on the no-confidence proposal registered by the CPN (Maoist Center) and the Nepali Congress on July 13.

Terming the no-confidence motion as the proposal of 'envy and worry', Prime Minister Oli said the CPN (Maoist Center) and the Nepali Congress have attempted to bring down the government, worried that they would be wiped out in the coming election due to the programs of self-reliance and development the government has brought.

"The goal of my political career is to make the country self-sufficient through rapid economic development rather than go in government and remain in power," he said, adding that the constitution should show the way for the formation of a new government. The PM also urged all to take the politics on a course of harmony rather than tension.

The participants waved placards with 'I am with KP Oli' written on them as the Prime Minister reached the program venue - Nepal Academy, Kamaladi. RSS