KATHMANDU, April 12: The United Nations Headquarters has said that Nepali soldiers would continue to stay in troubled Libyan capital city of Tripoli.

"We are in touch with Nepali officials. Contrary to reports, there's no plan to withdraw the Nepalese Guard Unit. It continues its mission in Tripoli with @UNSMILibya. We greatly value their contribution & continue reviewing contingency planning in light of developments," the UN Spokesperson's Office said on Twitter.

Amid rumors that the Nepal Army was opting to withdraw its soldiers from Libya, Army Spokesperson Bigyan Dev Pandey said on Thursday that the Nepali troops would continue to stay in Tripoli as long as the UN office decides to stay there.

He said that there is no question of withdrawing Nepali troop unless UN itself decides to pull out its office. “Our position is clear. Our troops will continue to guard the United Nations Office in Tripoli as long as the UN decides to keep its office there,” he said.

Meanwhile, a former spokesperson of the Nepal Army, Deepak Gurung said "This is the unfortunate part as nearly all the contingents contributing troops serving in the UN Peace Keeping Missions give priority to their own national interest first. Not Nepal." 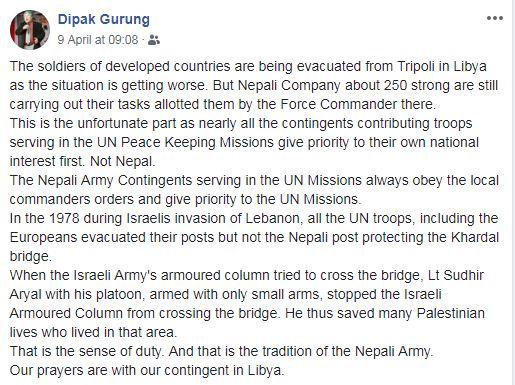 UN office has been monitoring the security situation after Libyan national Army led by General Khalifa Haftar stepped up offensive against Tripoli after failed attempt of UN to broker peace.

There is a total of 231-strong Nepali troop under the command of a lieutenant colonel currently stationed in Libya to guard the UN Office. Amid India and US withdrawing their small contingent from Tripoli, there are safety concerns of NA personnel.

General Haftar wants the country's internally backed government led by Prime Minister Fayez al-Sarraj step down—something al-Sarraj has rejected saying that he would step down only after an elected government comes in place.

The latest tension came after UN Envoy to Libya Ghassan Salame's effort to lay groundwork for elections failed after rebel leader General Haftar rejected to come together at a UN-brokered national conference. The military offensive on the part of General Haftar in Tripoli to seize power has threatened the country's peace process and political stability.