KATHMANDU, March 18: The fourth meeting of the ongoing session of the House of Representatives (HoR), which is scheduled for March 19, does not have any significant business. With this, the lower house of parliament will end without entering any important proceedings.

According to the tentative business schedule published by the Parliament Secretariat, Speaker Agni Prasad Sapkota will present the notices for absence sent by the absent lawmakers for parliament’s endorsement as per the House of Representatives Regulations-2017. 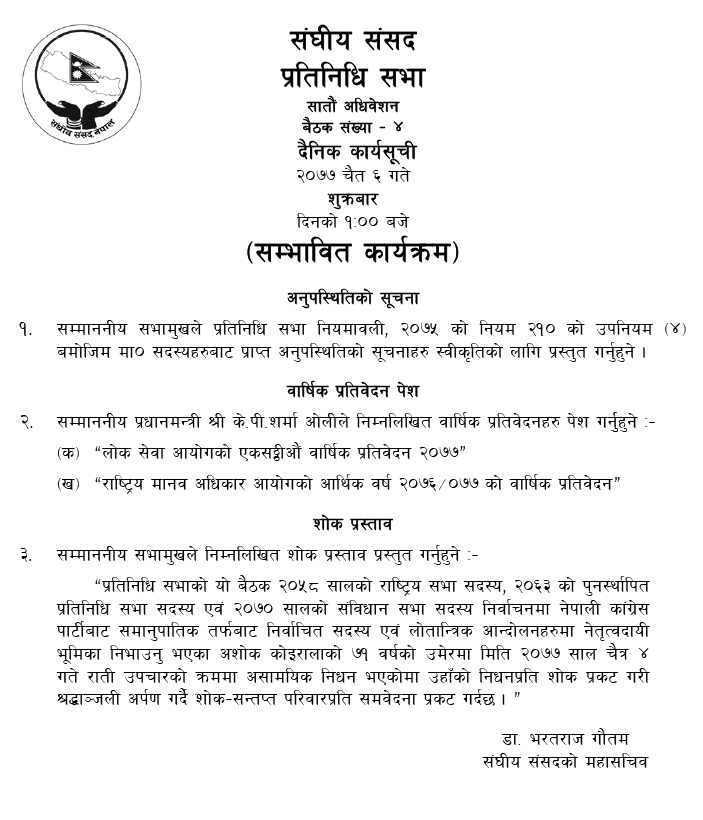 A condolence motion over the demise of former lawmaker Ashok Koirala will also be presented before tomorrow’s House meeting. Koirala, who represented the Nepali Congress in the reinstated parliament in 2006 and Constituent Assembly II, passed away at the age of 71 on March 17.

The HoR, which was reinstated through the Supreme Court’s order on February 23, could not enter any significant business amid the intense row in the ruling CPN-UML. The first meeting of the 275-member lower house of parliament on March 7 was skipped by a faction of the erstwhile Nepal Communist Party (NCP) and obstructed by lawmakers of the main opposition Nepali Congress (NC). The second [March 10] and third [March 16] meetings also concluded by just endorsing condolence motions.

The government tabled some ordinances including one amending the work procedures of the Constitutional Council (CC) in the first meeting, which, however, was opposed by the NC, CPN (Maoist Center) and lawmakers of CPN –UML close to senior leaders duo Jhalanath Khanal and Madhav Kumar Nepal.

Prime Minister Oli has been arguing that his move to dissolve the House on December 20 last year has been justified as the reinstated parliament is being disrupted and neglected by those demanding its restoration. He also claimed that the current parliament cannot form a new government as there is not a single party with majority seats after the court revived the erstwhile CPN-UML which holds only 121 seats and is still short of 19 seats to form a government.

“Restrictions on political activities under pretext of pandemic”

KATHMANDU, May 27: The Nepali Congress (NC) has expressed concerns over the KP Oli-led government, accusing it of trying to... Read More...

Nepali people have brought down the dictators through revolutions. Remember 2007. ... Read More...