No city for disabled 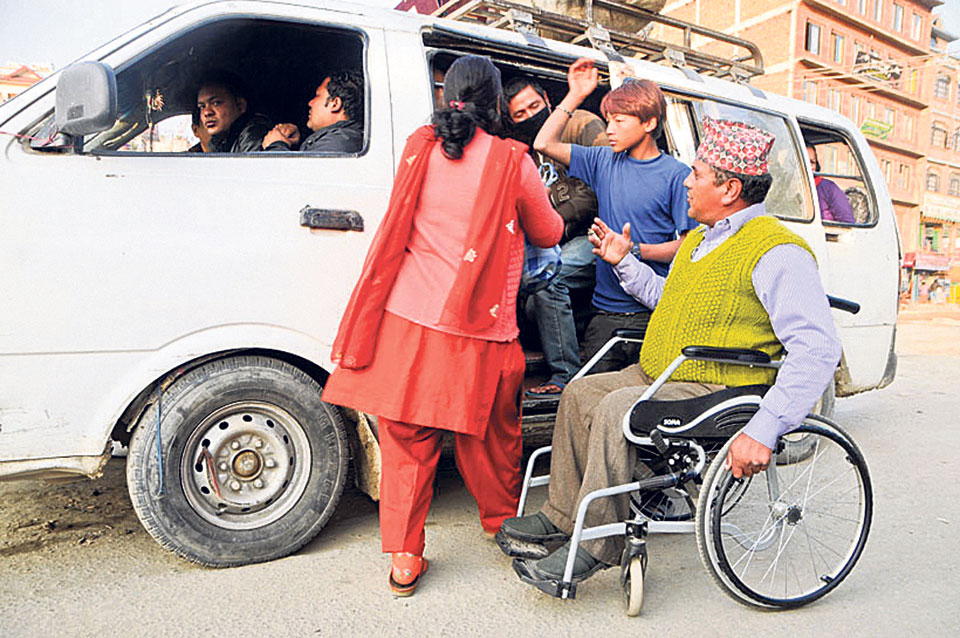 Imagine having to share the same unsafe roads by a wheelchair bound person, or those with other types of assistive devices who are forced to walk on the roads instead of pavements

Nepal celebrated 27th International Day of Persons with Disability (IDPD) on December 3, 2019 with much fanfare, public service announcements, and programs to mark the occasion in Kathmandu, which as a rapidly growing metropolitan city, has gravely failed those with disabilities to live as healthy and independent individuals. Miserable condition of roads and pavements pose threats to anyone, let alone those with limited abilities. However, our efforts are mostly limited to celebrating the occasion as the IDPD day. Translating its objectives into reality is yet a far cry.

What numbers say
The United Nations’ data indicate that globally over one billion people live with one or more disability conditions. By 2050, of the 6.25 billion people who will be residing in urban areas, 15 percent will be living with some form of disability. Additionally, given the trend of increasing aging population, the number of people with disability will only continue to increase, in both rural and urban parts of the both rich and poor countries of the world.

In Nepal, according to 2011 census, about two percent people of total population live with some level of disability. Of those who report some level of disability, almost three quarter of them would actually be able to independently function if they had access to assistive devices and proper and unhindered infrastructures for their mobility.

Kathmandu has over 6000 people living with different types of physical disabilities, not including those with hearing and vision impairments, mental disabilities and other forms of limited abilities. In addition, Census Bureau of Statistics states that there are 25,302 people in the 70 plus age group. If we assume that majority of people of this age group are physically limited in mobility, pavements in the present conditions could be risky at best for them to use as well.

Again, there are plenty others who are younger than 70 who too could be limited in their abilities due to aging and short term injuries, and face the same risk. It is also worth noting that the 2015 earthquake probably has left lots of people with some level of disability.

Risky roads
One need not investigate further than take a casual walk in one’s neighborhood to realize the extent of obstructions for able bodied people, let alone those with limited abilities. Kathmandu’s much needed and often contentious road expansions have left sidewalks as collateral damages that are often shrunk to, literally, inches in width. Conditions of these sidewalks across the city make mockery of pedestrian’s need and safety. Sidewalks are more like obstruction courses that mimic the rugged hilly terrains than safe pathways for people to use. One has to negotiate with parked motorcycles, storefront inventory displays, homeowners’ construction supplies, utility poles that randomly protrude in middle of walkways, metropolitan’s planted trees, and, of course, dug up and loose surface materials to safely reach from one point to another.

These pavements are far from being safe walkways for people. They are more like injury traps. So those heeding physician’s advice to walk as an exercise routine, has to do so on his/her own peril. Unrestricted mobility (accessibility) for those with disability or limited ability has to be of prime importance on its own for Nepal, especially as one of the 175 member states that already ratified the United Nations Convention on the Rights of Persons with Disabilities since its adoption in 2006.

Mark of a modern city in the 21st century should not just be limited to fancy buildings, massive infrastructures, and the latest vehicles. Rather these developments without incorporating needs of people with disabilities and limited abilities should be regarded as less modern. This would be infringement upon a significant percentage of the population’s right to free mobility, hence a curtailment of human rights, and independent life with dignity. Furthermore, lack of mobility and ability to physically access needed services disproportionately affect those on the lower rungs of socio-economic status as they have to rely on roads and pavements either to travel on their own or even to access public transportation.

On one hand there is much effort to provide more assistive devices to the needy to increase independence for those needing assistance to move outside of their homes. On the other hand, there is a severe lack of proper physical environment to do so. So the very people who are already facing hardships are also structurally excluded from being productive members of the society.

Kathmandu’s frequency and types of traffic accidents are already a concern for citizens and government alike. Imagine having to share the same unsafe roads by a wheelchair bound person, or those with other types of assistive devices who are forced to walk on the roads instead of pavements. So let us hope as we advocate for making roadways safe for drivers and pedestrians, we also incorporate plans and actions to make safe arrangements for those with disabilities to truly celebrate IDPD next December.

Police arrest seven on charge of gambling, seize Rs 1 million in cash and checks in capital

KATHMANDU, Nov 17: As many as seven persons were held on the charge of gambling in the capital. ... Read More...

Sports should be played by women and men alike without any forms of discrimination in terms of gender and disabilities Read More...

International Day of Persons with Disability being observed

KATHMANDU, Dec 3: The International Day of Persons with Disability is being observed today to promote legitimate rights and well-being... Read More...