Nirmala's sisters fear sleeping at home in absence of mother 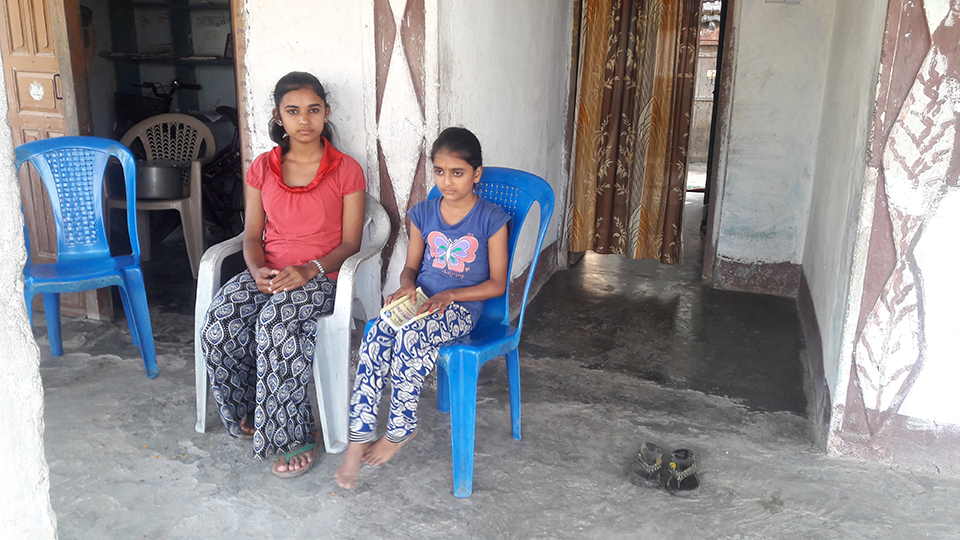 Nirmala Panta's sisters Manisha and Saraswati in the verandah of their house. | Photo: Republica

KANCHANPUR, Nov 29: Fifteen-year-old Manisha Panta was found lost in her thoughts while sitting on a plastic chair in front of her tin-roofed house on Wednesday. A little later, her younger sister Saraswati, 11, joined her after returning from their neighbor's home. Their gloomy faces show that they have forgotten to smile after their sister Nirmala Panta was raped and murdered about four months ago.

"Since our mother went to Kathmandu for our father's treatment, we are left alone," said Manisha, adding, "We are unable to have a sound sleep at night due to fear."

This is the reason why they spend the daytime at their home but go to their neighbor Manju Bhatta's house to spend the night.

Earlier, their mother Durga Devi used to cook their meal but since she is not home, these sisters are not even having their meals properly.

"They normally don't cook their evening meals. They refuse eat even when I offer them food," said Manju, who has been providing shelter to the girls at night.

They are waiting for their mother to return home so that they can live in their house without any fear. Manisha is a tenth grader while Saraswati is in seventh grader. Both are appearing for their second terminal examinations. Despite willing to do well in their exams, they are unable to concentrate on their studies.

Four months since the rape and murder of their loving sister Nirmala, the perpetrators are still roaming freely. Despite her family's struggle to seek justice, the concerned authorities are nowhere close to finding the culprits. This has mentally tormented the girls not only because they have been denied justice but they fear for their own safety.

"They would have been able to forget the heinous incident to some extent had the culprit(s) been booked," said Manju, adding, "People keep asking them about the developments in her sister's case which is no less than scratching their wound."

There was a time when these girls fearlessly stayed at their house even during darkness. Now, the same house haunts them at night even with lights. Demanding justice for their daughter, her parents had been staging indefinite sit-in in front of the District Administration Office (DAO) since November 11.

However, their father Yagyaraj had to be taken to Kathmandu for treatment since he started showing signs of 'mental illness'. Her mother along with various other people reached Kathmandu with Yagyaraj on November 24 for his treatment. On Wednesday, Dr Govinda KC and Hishila Yami reached the DAO to continue the sit-in with Nirmala's stepmother.

KATHMANDU, Sept 16: Thousands of civilians took to the streets in major cities across the country on Saturday to exert... Read More...

New CDO says probe should have begun right after the incident

KANCHANPUR, Aug 26: The newly-appointed Chief District Officer (CDO) of Kanchanpur, Taranath Adhikari has said that the victim's family would have... Read More...