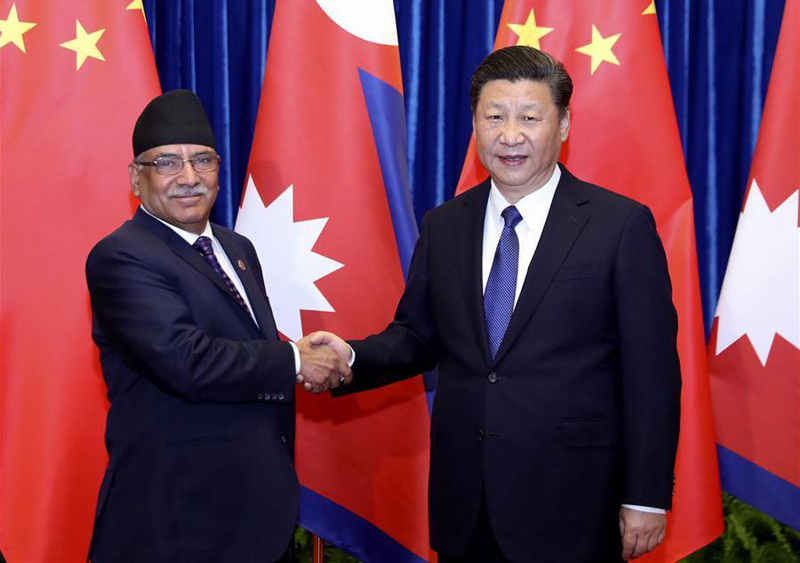 Rail connectivity with China, if it gets India’s approval, will boost economic growth and reduce income inequalities in the region
It’s indeed remarkable that Nepal as a nation-state has been able to maintain its separate, independent existence for over two centuries, not only in territorial terms but also in terms of its distinctive cultural features, political characteristics and economy.

This is remarkable when one looks at its juxtaposition between two giant neighbors—China and India—making Nepal no more than a dot in the vast ocean of Asiatic landmass.

And its 28.5 million people are invisible as they find themselves in the midst of China and India, with a combined 2.6 billion people.

We can attribute Nepal’s separateness to its prohibitive geography and absence of reliable transport system, which make it challenging for outsiders to travel through the country’s rough terrains and to look for trade and other exchange opportunities. To this day distances in the country are often measured in the number of days it takes to walk there on narrow and steep pathways.

In addition to difficulty of terrains, for much of the country’s history, the government has followed an isolationist policy by curtailing trade and travel opportunities for its people, fearing undue influences from abroad. Otherwise, there was no reason for the government to completely abstain from development of an affordable transport system in the country’s plains abutting India.

Until now Nepal hasn’t seriously considered a rail link with India, which would have opened the region and the rest of country to the vast Indian markets. It is indeed fascinating to see that Indian rail lines stop within a few miles from Nepal border at several points. These lines otherwise could have been extended northward inside Nepal to make modern transport available to at least half the country’s population. But this option has never been seriously considered. It is not openly discussed but the only reason Nepal has not taken advantage of the railways in India is because it wants to limit contact with India.

Given this history of Nepal’s isolationist policies, which has focused on limiting transport, and development of railways in particular, it is puzzling that the country was rather eager to participate in China’s mega multi-country transport initiative that will connect Asia and Europe through a massive investment in roads, railways and port infrastructure. The initiative—named One Belt One Road (OBOR)—will be funded by Chinese loans to the Asian Infrastructure Investment Bank, which would take lead in the development of transport networks to connect markets and peoples of over two dozen countries in Asia and the Middle East.

It is not yet clear how the OBOR initiative will benefit Nepal, more so as India is not yet a part of it and the American refusal to participate will likely limit its international credibility.

However, the expectation is that India will not be unhappy—much less block—Nepal’s efforts to cultivate deeper relations with China, in particular through expanded trade and investment cooperation. So Nepal would be wise to take a balanced approach to opening up with China, keeping India’s interests in mind.

The only feasible and inexpensive means for Nepal to access China will be through a rail link. This rail line crossing the Himalayas and connecting the world’s two largest countries will not only be an engineering marvel but also an integration masterpiece that hadn’t yet been conceived, much less attempted. Through OBOR initiative Nepal will be able to overcome its geographic isolation and be part of the global community, an option that has been compromised by India’s presence next door.

For Nepal, the immediate advantage of a deeper China-India link will be its expanded economic potential that has heretofore been stymied by lack of a strong transport system and limited market size due, principally, to its lack of access to most Indian and Chinese markets. One evidence of Nepal’s disconnect from its two largest neighbors is the large gap this has created in their income levels and growth rates,  which is rare for countries living side by side.

For example, according to the International Monetary Fund (IMF), Nepal’s per capita income in 2016 was estimated at US $733, compared with $1,723 for India and $8,113 for China. Also, Nepal’s average GDP growth rate of 3 percent is substantially lower than above 7 percent performance of Indian and Chinese economies. This is akin to blocking one small dry lake from taking water from two over-flowing rivers on its two sides.

The main reason for this divergence of economic fortunes is Nepal’s historic isolationist policies, which are an outgrowth of its geography but, for the most part, the result of an aversion to foreign contacts with regard to trade and investment. The idea of rail connectivity with China under OBOR, if it gets the approval of India, will go a long way in closing the growth gap and reducing income inequalities.

While it is true that the size of production is limited by the size of market—which includes market access outside the country—limited production capacity poses a much greater challenge for Nepal. The reason is that Nepal’s economy, in large part, remains subsistence-based that yields little or no surplus which can be traded and exported.

With regard to trade with China, Nepal will have limited opportunity to specialize and compete in industrial products. As it modernizes its economy, China has over the years come to dominate world markets in light industrial products, and cheap consumer goods in particular. It will then be advisable for Nepal to look to agriculture in the Tarai belt to build its export capabilities.

Specialization should minimize land use for field crops and focus on fruits, vegetables and dairy products, for which southern China, including the vast expanses of the Tibetan Plateau, provides an unlimited market. These products can be exported fresh or processed, which in turn will help with the growth of agro-based industries.

Further, if India does agree to expand the Chinese rail line deeper into Indian territory, possibly through an express train link from Beijing to New Delhi—a manageable distance of 4,000 kilometers—Nepal’s Madhes and India’s northern states can look for new export opportunities in Chinese and Russian markets. The outlook then will be for globalization to expand its wings into hitherto unexplored territories which, among other things, will help moderate the anti-globalization push of the United States under Trump and, generally, a waning support for globalization in industrial countries.